"Elvis: The Army Years Uncovered"
Behind the Scenes of the Two Years that Changed The King of Rock and Roll's Life
By Trina Young

In the last 10 years, Trina Young has earned increasing credibility in the crowded field of Elvis Presley commentary and publishing. She wrote an Elvis column for the Examiner.com website for five years before launching her own website, Elvis-Biography.net. She has published two books about Elvis — “Elvis: Behind the Legend” (2015) and “Elvis and The Beatles” (2018). Her standing as an authority on the life and career of Elvis Presley is further enhanced by her latest book, “Elvis: The Army Years Uncovered.” 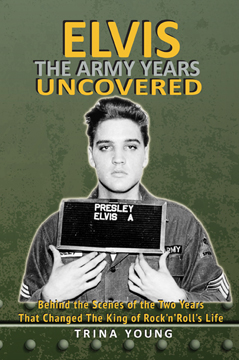 Ms. Young delivers on her promise in the book’s title by uncovering previously unpublished information about the two years Elvis spent in uniform. As interesting as those episodes are, though, it’s not the content that makes Ms. Young’s latest book so impressive. Rather, it’s how the story is told. In 25 chapters, she recounts the unique story of Elvis Presley’s army experience chronologically from his induction on March 24, 1958, through to his discharge on March 5, 1960. It’s an interesting read, revealing as it does the pivotal changes that occurred in Presley’s personal and professional lives during those two years.

In her introduction, the author clearly states her two main premises. “Those two life-changing years … would redefine, reshape and revamp the life and career of Elvis Aaron Presley. While behind the scenes, Elvis thought being drafted was the worst thing that could have happened to him, in some ways turned out to be the best.” As the story unfolds, the reader is regularly reminded of the slowly developing changes in Elvis’ life.

• Elvis wanted to serve in the army?

Early on, Ms. Young makes the rather startling contention that Elvis actually “wanted” to serve in the army. Throughout 1957, she contends, when Elvis knew his name was in the draft pool, he often publicly expressed a “willingness” to serve while privately hoping he’d never be called. After he received his draft notice, though, the author says Elvis accepted his fate. She points to Presley’s comments to reporters during the filming of King Creole in March 1958, when he said it would be a “relief” to get away from the “merry-go-round” he had been on the previous two years. While he played the “good sport” in public, he was afraid his career would be ruined. The author reveals how that uneasiness caused Elvis to keep up with entertainment trends while he was in uniform and make the necessary adjustments in his music that would allow him to resume his career after his discharge.

After the induction, the book follows Elvis through his military training, placing his army haircut and the death of his mother in their proper sequence and perspective. According to a fellow soldier, Elvis loved “every minute” of basic training, while the death of his mother soon after brought him well-reported despair. Then the author follows him on to Germany, where the most interesting part of Elvis: The Army Years begins. By following Elvis day-by-day, week-by-week through his 17-month deployment in Germany, the story gives the reader a sense of how both difficult and rewarding that period was for Elvis Presley.

Presley’s participation in army field maneuvers was off limits to the press, but quotes from his fellow soldiers are offered to suggest that he generally performed his duties well. Ms. Young makes much of Elvis’ promotions along the way from “private,” to “private first class,” to “specialist 4th class,” and to his final rank of “sergeant” as evidence of “great personal accomplishment.” Even though some may have been regular promotions for doing one’s job and respecting military discipline, the author provides plenty of testimony from Elvis’ army commanders and fellow soldiers that he did his job as well as anyone.

To her credit, though, Ms. Young briefly allows some allegations that Presley got special treatment in the army. A fellow jeep driver believed Elvis was given softer assignments, and future wife Priscilla even asserted Elvis faked being sick once to avoid harsh field conditions. The author notes the same jeep driver “seemed to resent the fact that Elvis got to live off base” while his fellow soldiers were housed in barracks. Ms. Young contends Elvis had the right to live off base because he had dependents to support, those being his father Vernon and his grandmother Minnie Mae. The concerns of his fellow soldiers, though, are understandable, considering Elvis had a home in Memphis where his relatives could have lived in comfort, while the other draftees could never have afforded to bring their dependent relatives to live with them in Germany.

The big advantage Elvis had over his fellow soldiers, though, was his ability to attract girls. Elvis: The Army Years Uncovered covers them extensively within the book’s chronological structure. Girls, and there were many of them, are identified, quoted, and classified in importance as they appeared at various times during Elvis’ service. Some names are well known to Elvis buffs — Margit Buergin, Elisabeth Stefaniak, Vera Tschechowa — while others, including Kitty Dolan, Jane Wilbanks, Janet Day, and Heli Priemel, are lesser known in Presley folklore. Priscilla, of course, is given extended coverage in the book after coming on the scene in the fall of 1959. Of course, there were a bundle of unnamed girls. Elisabeth Stefaniak reveals, “There would be at least a couple of girls each week, more on weekends.” Without giving details, the author admits “Presley’s promiscuity was at full throttle during his time in Europe.”

Colonel Parker pops up in the narrative occasionally. He’s portrayed as playing a generally positive role in Elvis’ army stretch, a disappointment, no doubt, to fans who believe he unnecessarily forced his client into the military. We learn that during those two years Parker kept Elvis’ name and image alive in the American consciousness, continued to release records, negotiated movie contracts, and boosted Elvis’ morale with personal letters of encouragement. Ms. Young judged that the Colonel’s “less is more” strategy worked well for Elvis. The less access the public had to Elvis, the more demand for him increased, peaking at his March 1960 release from the army.

A mixture of other events are covered in the progression of Presley’s army service. Included are his introduction to karate, the bogus fatal car wreck, the self-indulgence in Paris, the polio campaign appearance, the impromptu concerts, and a meeting with a Saudi prince. Elvis’ often reported prescription drug use in Germany is glossed over and discounted with a reminder that his overdependence on pills actually began before he entered the army.

The author closes her overview of Presley’s army years with evidence supporting her main opening premise that his service in the army was one of the best things that ever happened to him. Ms. Young points to the opportunities it gave him to learn more about himself and his musical aspirations before reviving his entertainment career. She closes the story with the tribute to Elvis military service that Estes Kefauver, U.S. Senator from Tennessee, read into the Congressional Record in Washington, D.C.

The book is modestly illustrated — 16 images are grouped together in a middle section. The text is followed by a handy timeline of Elvis Presley’s army service from his registration for the draft in 1953 through his “official” discharge from the Army Reserve in 1964. Extensive reference notes then provide the author’s sources for quotes, facts, and data mentioned in the book’s 25 chapters. A “Selected Bibliography” of over three-dozen resources concludes the book at 200 pages.

The way Trina Young tells the story in easy to understand language from beginning to end and the extensive research that supports it at every step, make “Elvis: The Army Years Uncovered” the best account to date of Elvis Presley’s life during his years of military service. Other books may offer greater detail on certain periods of that time, but none covers the full two years with such enthusiasm and accuracy as Trina Young does here. It’s highly recommended for Elvis fans and scholars alike. — Alan Hanson | © September 2021

"Other books may offer greater detail on certain periods of that time, but none covers the full two years with such enthusiasm and accuracy as Trina Young does here. It’s highly recommended for Elvis fans and scholars alike."