1956 … The Year Elvis the Pelvis
Burst Upon the American Scene

It was Elvis Presley’s breakout year. After two years of recording in a small Memphis studio and playing backwater Southern towns, Elvis exploded on the American entertainment scene from every angle imaginable. In 1956 Elvis seemed to be everywhere—on the record charts, on TV, in movie theaters, and live on stage. 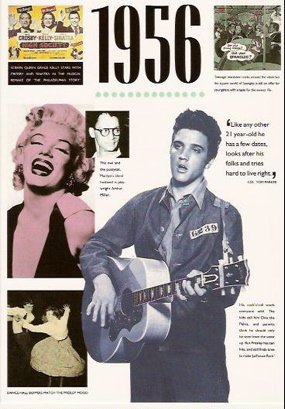 Elvis made record chart history in 1956. During the year he placed 17 different songs on Billboard’s Top 100 singles chart, including 3 singles that reached #1—Heartbreak Hotel, Don’t Be Cruel, and Love Me Tender.

Presley also made TV history in 1956. He appeared on prime-time network variety shows 11 times, including 6 appearances onStage Show with Tommy and Jimmy Dorsey; twice on The Milton Berle Show; once on The Steve Allen Show; and two times on The Ed Sullivan Show. In 1956 Elvis also took the first step in a long Hollywood career with the release of his first film, Love Me Tender, in November.

Throughout the year, however, Elvis continued to take his stage show directly to the country’s teenagers. In 1956 the newly crowned “King of Rock ’n’ roll” appeared in concert 143 times in 79 different cities. His commitment to live shows in 1956 helped build the loyal fan base that would be the foundation of his continuous popularity in future years. | Alan Hanson (August 2010)

Select from among the links below to learn more about Elvis in 1956.

Elvis in the News

• Elvis in March 1956: It was the most important month in Elvis Presley's career.

• Elvis in June 1956: A tour of Long Beach record stores revealed his popularity then.

• Elvis the Pelvis: The origins of an iconic rock 'n' roll nickname.

• Elvis' Encounter with Robbie Moore: The Memphis belle taught Elvis a lesson about privacy in 1956.

• Elvis and June Juanico: The day Elvis's girlfriend talked too much.

• Analyzing the Presley Craze: The New York Post tried to figure out Elvis in 1956

• The Priscilla Myers Story: An Example of Elvis Presley's compassion in the midst of his exploding fame.

• Letters to the Tribune: A series of reader letters in the La Crosse Tribune after Elvis' appearance there on May 14, 1956.

Elvis on Stage in …

• San Antonio: Presleymania was in full bloom by April 1956.

• Waco in April: A vulnerable young Elvis was revealed in a Waco newspaper interview.

• Tulsa: Hysteria in Tulsa was like "throwing Christians to lions."

• Houston: How the world changed in six months.

• The Twin Cities: A St. Paul critic addressed an open letter to Elvis in 1956.

• Memphis, May 1956: Elvis came back to Memphis for a triumphant homecoming.

• Little Rock: A Little Rock newspaper columnist had a sensible attitude about Elvis in 1956.

• Sioux City: An Iowa newspaper blasted Elvis after a 1956 show in Sioux City.

• Omaha: Newspaper letters revealed a rift between teenagers and parents.

• Oakland: “If he did the same stuff on the street, we'd lock him up," said an Oakland cop.

• Charleston: Elvis made national news when he bit a reporter's hand.

• Savannah: Elvis was treated with respect by a Savannah newspaper in 1956.

• San Antonio: It was boys vs. girls in a San Antonio teen debate over Elvis in '56.

• Toledo: Elvis rumbled in a Toledo bar, then rocked on stage.