In 2007, when I first started looking through newspaper microfilm archives for my Elvis ’57 book, I learned to check the editorial page in the 10 days or so after Elvis performed in a city. Invariably, I would find “letters-to-the-editor” commenting on the concert or the newspaper’s coverage of it. Most were first-hand accounts by people who had attended Presley’s show, and as such, were a great resource from which I often quoted in my book. 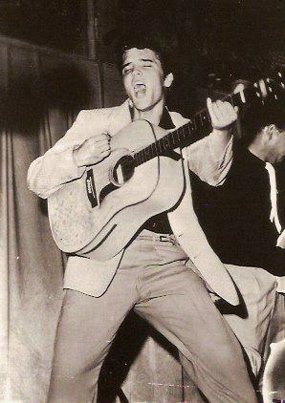 I still regularly look through 1950s newspaper microfilm searching for articles about Elvis. When I find one, I always scan the editorial pages for reader letters reacting to the article. Rarely did these Elvis letters appear in isolation. They usually came in a pattern. The first letter printed might be critical of Elvis. A couple of days later, two or three letters supporting Presley would appear, to be followed a day or two later by more letters for and against him. These letters often formed a thread on the editorial page that could run up to several weeks. The counter-punching in these Elvis letter threads is often entertaining and certainly revealing about the strong attitudes Americans had toward Elvis back then.

A good example is the month-long Elvis thread in the “Today’s Letters” column of the New York Daily Mirror in September 1956. This series of letters started August 25 when the Mirror printed a letter under the header, "Moron's Delight." It read, "The only people who enjoy Elvis Presley's insane bellowing are idiots, morons and half-grade nuts. They haven't got an ounce of culture, refinement or decency. If it was up to me I'd have them all shot!" The letter was signed, "Jess Barton, The Freethinker, Stony Ridge, Ky."

Barton’s criticism was countered by the following letter printed in the Mirroron August 30:

"I am a teener and my musical tastes include Rock'n'Roll as well as the classical varieties. I'm neither a moron or an idiot but I am an Elvis Presley fan."—Angela Falisey, Brooklyn

Another writer came to Elvis' defense on September 4:

“Why must people make my Elvis suffer so? Stop criticizing him. I love him and he loves me. He told me so himself—a thousand times in every song he’s ever sung. I bleed when I hear unkind words uttered against my love.”—Bertha Fleish, N.Y.C.

On September 7, other letter writers went after “Freethinker” Barton:

“Last week you stated that I was a misguided creature. Well, I come from a respected religious family. Far from being a half-grade I am a good student in an important school. I’m still an Elvis Presley fan and the world can do without your brand of ‘intellectualism’.”—Angela Falisey, B’klyn

“Jess Barton should rename himself ‘Freestinker.’ Elvis is a swell guy who gives his parents all he can. He doesn’t drink, smoke or take dope. Can Jess Barton say the same for himself?”—Rose Heagney, Troy, N.Y.

On September 13, two more letters—one for and one against Elvis—appeared in the Mirror:

“I agree with the Freethinker. Elvis Presley is a monster and his singing is horrible. How anyone could be a fan of his is beyond me.”—Bobby Breen, B’klyn

“Speaking for all us jive bombers, we didn’t know people like the Freethinker existed. If you think Elvis’ singing is no where, wake up cat, because you’re the one who’s nowhere. Six feet under may not be deep enough for him because even there he’ll be remembered while a square like you would only be pushing up daisies.”—Gracelyn Sanzone, B’klyn

The next day, the Mirror printed a telegram it had received from the beleaguered “Freethinker:”

“To the New York Daily Mirror: How dare you print a photo of that scourge of youth, Elvis Presley? I am shocked at your lack of taste! You have made Presley’s fans—my enemies—joyous and I shall not forgive you for it. I intend to start an immediate all out campaign against this person—by mail, phone and wire. I even intend buying anti-Presley time on the radio and TV. You haven’t heard the last of me, Mirror!”—Jess Barton, the Freethinker

On September 16, the paper printed a letter from an Elvis fan with a request:

“Mirror, if you would print a few articles on our beloved Elvis Presley, I and all my friends would just love you for it. I’m sure every one of Elvis’ fans would go down on their knees to you and read you every live-long day. Wouldn’t we, jive bombers?”—Bernice Yertz, Bronx

In fact, the Mirror was already planning to do just that. Starting September 23, the paper ran articles about Elvis for eight straight days! Meanwhile, back on September 18, the Freethinker turned his ire on the Mirror itself, which answered him with an editor’s note:

“Why do you print so many pro-Presley letters, Mirror? Do you do this to embarrass me? Next you’ll be nominating this yelling yelp for President. Cut it out immediately or I shall stop reading your paper.”—Jess Barton, the Freethinker

Sorry, Jess, you can think as freely as you wish but everyone gets his say in this column.—Ed.

The Elvis debate raged on in the Mirror the next day, September 19:

“If Jess Barton, the Freethinker, does anything to hurt Elvis Presley’s career he will make an enemy of every teen-ager. What did Elvis ever do to him anyway?”—T. F., N.Y.C.

“I hope the Freethinker really gives Elvis a whopping. Someone should shut that idiot’s big yelling mouth.”—Georgie Dunbar, Bronx

More letters were printed on September 23. By then the debate was heating up and becoming increasingly personal:

“Presley is nothing but a yelling whelp—a half-rate bird—a gyrating jerk—and an insult to the intelligence of the modern teenager. Rid him from the airwaves, TV and movies! Kill the ugly sound he generates! Drive him from the world of music!”—Jess Barton, the Freethinker

“If the Freethinker doesn’t cut out his anti-Presley campaign we Presley fans are going to track him down and burn him alive.”—Rocky and 16 other guys

“Elvis Presley is a screaming hyena. His disgusting exhibitions could only appeal to the lowest type of individual.”—Frank Spence, Bronx

When the Mirror received the following letter, it probably realized the Presley dispute it was hosting had gotten out of hand. The letter was printed on September 25:

“Someone by the name of Bobby Breen wrote an anti-Presley letter recently and people have been annoying the death out of me and my husband because of it. There are other Breens in this city—some of them Bobbies—so please stop annoying us.”—Mrs. Joceyn Breen, N.Y.C.

The Mirror printed two more Elvis letters on September 27 but put end to the running debate after that. No doubt they continued to receive Elvis letters and could have kept the back-and-forth going indefinitely. By that time, though, it was surely clear to the paper’s readership that there was no middle ground when it came to Elvis Presley. — Alan Hanson |© May 2008

"The counter-punching in these Elvis letter threads is often entertaining and certainly revealing about the strong attitudes Americans had toward Elvis back then."