Elvis History …
All About the King of Rock 'n' Roll

Is there room for another Elvis biography? You wouldn't think so. Three widely known ones have been published. Jerry Hopkins wrote the first one, Elvis: The Biography, in 1971 and followed it up with a second volume in 1981. That same year Albert Goldman's controversial biography, Elvis, was published. However, Peter Guralnick's two-volume work is considered the definitive Presley biography. His Last Train to Memphis: The Rise of Elvis Presley appeared in 1994, followed by Careless Love: The Unmaking of Elvis Presley in 1999. 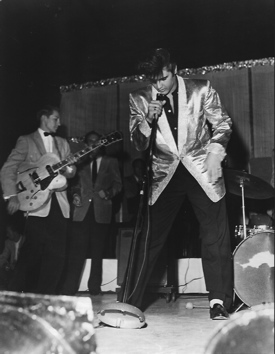 Even if the spurious Goldman book is tossed aside, it would seem that between Hopkins and Guralnick, Presley's entire life story has been told in full, leaving no need for another Elvis biography.

However, the fact is that, as lengthy as past biographies have been, they only provide an overview of the eventful life of Elvis Presley. There are gaps waiting to be investigated and reported on in detail. For example, in 1957 Elvis took his stage show to 18 American and Canadian cities. These shows have great historical significance for the legacy of Elvis Presley. They were his last tours of the 1950s and helped solidify his influence on American culture as the decade came to an end.

His biographers have given little note to this period of Elvis' life. Hopkins devoted just 4 pages to it, Goldman 10 pages, and Guralnick 11.

When I started looking into Elvis' 1957 concerts, I was amazed at how much information was available but had never been revealed by his biographers. In Elvis' life there were many interesting and meaningful events that are generally unknown or have been under-reported. Some are serious in nature, while others are simply interesting anecdotes. To learn more about the history of Elvis Presley, choose from among the links below. — Alan Hanson (February 2008)

• Elvis and Racism: Rumors and accusations have clouded Elvis' legacy.

• Hugh Jarrett Dies at Age 78: Jordanaires' bass singer back Elvis in the fifties.

• Gordon Stoker: Remembering the leader of The Jordanaires.

• Scotty Moore: Remembering Elvis' guitarist … in his own words.

• Hank Garland: Elvis called him, "One of the finest guitar players in the country.

• Elvis and Jerry Lee Lewis: The Killer who thought he should be the King.

• Elvis and Roy Orbison: "The greatest singer in the world," said Elvis.

• Pat Boone: His press-generated competition with Elvis Presley in the 1950s.

• Comparing Elvis and Frank Sinatra: They had more in common then you might think.

• Elvis and The Beatles: What the King of Rock 'n' roll and The Fab Four really thought about each other.

• When Elvis Met Nixon: An urban legend was born when the King of Rock 'n 'Roll bonded with the President of the United States.

• Comparing Elvis and Bing Crosby: Which deserves the title of "Entertainer of the Century"?

• Paul Anka on Elvis: Anka recalls Presley in his 2013 autobiography.

• Colonel Parker's Influence: Did Elvis blindly follow where the Colonel led him?

• In Defense of Colonel Parker: His Hollywood secretary was his biggest supporter.

• Elvis' Birthday: A day each year to remember what he means in the lives of his fans.

• The Fourth of July: What Elvis was doing on the Independence Days of his life.

• The King of "Rock 'n' Roll": Did Elvis really deserve the crown in the fifties.

• Was Elvis Presley an Artist?: Did his body of work in the recording studio, in films, and on stage earn him that lofty label?

• Elvis and Politics: The King kept his political opinions to himself.

• Elvis' Voting Record: The King was always too busy to vote for President.

• Elvis and Charity: Elvis Presley deserves more recognition for his charitable acts throughout his career.

• Eggheads on Elvis: What professors thought of Elvis in the fifties.

• Elvis' Hairstyles: His famous pompadour and other hairstyles.

• Elvis' 1950s Sideburns: They caused both angst and adoration.

• Religious Criticism of Elvis: Elvis endured criticism from religious leaders in the 1950s.

• Elvis' Star Fades in Las Vegas: Is Elvis running out of luck in Sin City?

Elvis in the Press

• Elvis Critics in the Fifties: Some newspaper writers urged parents to react with violence toward their Elvis-adoring kids.

• Elvis and the Journalist: Memphis writer James Kingsley had special access to Elvis.

• Elvis Surveyed in the Fifties: Pollster Eugene Gilbert's newspaper column brought some reason to the Presley debate in 1956-57.

• Elvis' Public Image in the Sixties: A 1962 Parade Magazine article proclaimed Elvis a "paragon of virtue."

• Elvis Press Reports 1975-77: The clues to his failing health were there.

• Opinions About Elvis in the Fifties: Everybody had one!

• The Death of Gladys Presley: "She was my best girl," Elvis sobbed at his mother's funeral.

• Elvis Girls in the Fifties: Girls on parade … it was part of Presley’s image building in the fifties.

• Girls Screamed for Elvis: Did girls have sex on their mind while watching Elvis in the '50s?

• Elvis and Marilyn Evans: The mystery girl at the "Million Dollar Quartet" session.

• Ann-Margret: What if Elvis had married Ann-Margret instead of Priscilla?

• Elvis' Wedding Day: Through the eyes of a Hollywood gossip columnist

• Ginger Alden: She told her side of the story in her book "Elvis and Ginger."

• Elvis Remembered: Elvis anecdotes told by a dozen people who knew him.

• Presley's Parents Talk About Raising Young Elvis: In an interview for a 1956 newspaper article, Vernon and Gladys Presley revealed how they raised their son.

• The Top Ten Moments in Elvis' Career: The top "Wish I had been there" Elvis events.

• Elvis and DJs in the Fifties: Some early rock ’n’ roll DJs helped push Elvis to the top of the charts.

• Elvis' Celebrity Supporters: In the fifties, many entertainers defended Elvis.

• Stories of Graceland: Some interesting things happened at Graceland when Elvis lived there between 1957-1977.

• Elvis and Canada: Rock 'n' roll controversy reached north of the border in the fifties

• Elvis' 1961 Press Conference: He displayed a lack of  confidence in his abilities and vision for the future of his career.

• October 1962: Amidst the Cuban Missile Crisis, I became an Elvis fan.

• Elvis Slept Here: So the Columbia Inn Motel in little Kalama, Washington, can claim after Elvis Presley's caravan stopped there on the way to Seattle in 1962.

• Elvis at the Seattle World's Fair: Behind the scenes with Elvis during his 10 days on location filming It Happened At the World's Fair.

• December 1968: When Elvis made a fateful decision that changed his life forever.

• Elvis at 75: A Time to Reflect: Sixties radical Abbie Hoffman recalls the influence of Elvis on American popular culture.

• Elvis and Garth Brooks: How the lyrics of "The Dance" are a metaphor for what fans feel for Elvis.

• Graceland's Top Moments in 2017: What did they mean for Elvis' fans?