Hoping to get a glimpse of Elvis in Seattle, a crowd of teenagers started gathering on the sidewalk in front of the New Washington Doric Hotel at 6:30 on the evening of Tuesday, September 4, 1962. Elvis Presley was scheduled to begin shooting scenes for his newest movie at the Seattle World’s Fair the next morning at 9 o’clock, and word was out he would be arriving at the New Washington in the early evening. But hours passed without an Elvis sighting, and the crowd began to thin as the 10 o’clock hour approached. With tomorrow being the first day of school, the youngest in the crowd were the first to abandon the vigil. 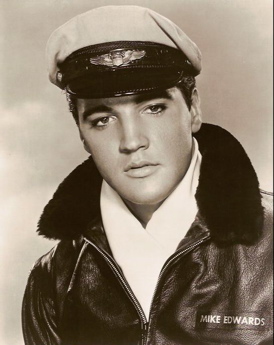 Elvis was indeed on his way, having left Los Angeles the previous morning in his recently purchased personal bus (actually a Dodge House Car), followed by a black Chrysler station wagon. Accompanying him were nine members of his personal entourage. The expected arrival of the caravan with Elvis in Seattle was delayed, however, by an unscheduled stop. Early that Tuesday morning, Elvis pulled off the highway into the parking lot of the Columbia Inn Motel in the small community of Kalama, Washington, about 140 miles south of Seattle. After sleeping through the day, Elvis and his crew continued the drive northward, finally arriving at the New Washington Hotel at about 1 a.m. Even at that hour, about 300 teenagers were there to greet him.

• Elvis in Seattle: Day One

The next morning, Wednesday, September 5, Elvis showed up for his first day of shooting at Century 21, more commonly known as the Seattle’s World’s Fair. Open from April through October 1962, the fair exceeded expectations, drawing about 10 million people to go up to the top of the Space Needle, ride the Monorail, and see the exhibits. It was reported that MGM had scheduled location photography on the opening day of school to reduce the number of youngsters there to see Elvis.

The first day of shooting for Elvis in Seattle was on the Monorail, which ran back-and-forth between downtown and the World’s Fair grounds. There were two trains, labeled the Blue Train and the Red Train. For the day the studio took over the Red Train, stretching a black curtain across the center of a car with a large camera in front of it. Studio personnel scurried around, while extras hired at $10 per day stood waiting on the Monorail platform. Twenty-five Seattle police officers provided security.

Then came the star. According to Don Duncan of the Seattle Times, Elvis, “tall, dark and with nice bone structure under his thick pancake makeup, strode in black cowboy boots aboard the Red Train at the World’s Fair Monorail terminal.” Behind him came the members of his entourage, each wearing black coveralls. One of them carried another set of coveralls on a hanger. “For the Great Man,” he told Duncan. “It’s sort of our trade-mark.”

Waiting inside the train were four extras designated for close-up parts. Two of them, Linda Humble and Joan Seiler, were Space Needle elevator operators. Humble, 19, also happened to be the current Miss Seattle. Elvis took his assigned seat next to Vicky Tiu, his child co-star in the film. Dialog director Jack Mintz spent a few minutes going over Presley’s lines with him, while a makeup assistant buffed the star’s fingernails. Finally, the cameras were turned on, and the train pulled out of the station heading downtown. The first scene shot featured Miss Humble, who in the script declines Elvis’s offer to take his seat, leaving him to observe her shapely figure as she stands in the moving Monorail car.

While school kept most of the screaming teenagers away, hundreds of adults of varying ages saw Elvis in Seattle from behind the Monorail terminal fence. Two young girls, apparently skipping school, rode back and forth on the Blue Train. They screamed each time Elvis’s train passed by going the other direction. “We’re going broke buying tickets,” one told Duncan.

During a break in the shooting, Elvis took the time to speak with one his fans, seventy-year-old Ethel Meyer. The Seattle Post-Intelligencer had recently run a story about Mrs. Meyer, who claimed she had seen all of Elvis’s movies two or three times and had purchased all of his records. Colonel Parker introduced her to Elvis, who spoke with Mrs. Meyer for several minutes and had his picture taken with her. This helped convince a P-I reporter that Elvis was a “heck of a nice young guy.” When the company took their lunch break, Elvis shook the reporter’s hand and said, “Nice to have met you, sir.” In the writer’s column the next day, he wrote, “That ‘Sir’ did it; I felt like a million years old. And now that I’ve met Elvis, I’ll have to listen to some of his records and find out what the hero worship is all about.”

The next day (Thursday, September 6), the amusement ride area, called the Gayway, was closed to the public so that the MGM crew could film there. Once word spread that morning that Elvis would be filming in the area, hundreds of Presley fans and curiosity seekers gathered on the outskirts of the Gayway. Mrs. Joyce Bucknell, housewife, mother of five, and president of “Our King Elvis Presley Fan Club,” stood nervously near the security line awaiting Presley’s arrival. “He’s everything,” she told Seattle Times reporter Stanton Patty. “In fact, I have a two-month-old son named Elvis. My husband is very broad-minded.” Donna Foltz, 15, from Portland, added, “I think I’ll faint when I see him. He has sex appeal and everything.”

When Presley arrived on the set, Patty wondered why everyone was so excited to see Elvis in Seattle. “Almost unaware of the crowd, the wavy-haired idol took his cues from the director and went through his paces like a robot,” Patty reported in his Times article that afternoon. 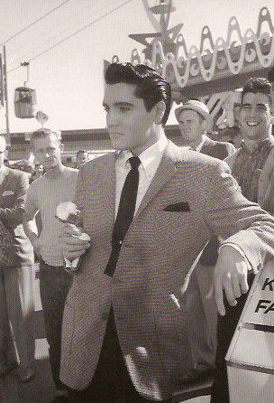 When the camera began rolling, the Gayway had to look busy, and so a hundred extras had been hired at $10 a day through the Washington State Employment Service. Most of them told Jack Jarvis of the Post-Intelligencer that they took the job just to see Elvis in Seattle. One group of extras certainly earned their money on the Gayway that day, according to Jarvis.

“In one scene during the forenoon, Elvis and little Vicky Tiu walked through a part of the Gayway. Two rides were in operation, with extras on them. In the short time I watched, they ran through the scene five times and still were going when I left. The extras were beginning to look as if the prolonged ride was getting to them.”

In that scene, Elvis and Vicky worked with a chocolate and nut covered ice cream bar and a corn dog on a stick. For each take they were handed fresh ones of each. Jarvis judged that, “Elvis was getting a little tired of the ice-cream-and-hot-dog diet. Vicky seemed to love it.” After finally getting the shot he wanted, director Norman Taurog moved the crew to the Lucky Strike coin toss booth, where Elvis won (in the film) a large stuffed animal for Vicky.

As Jarvis was leaving, he asked his P-I photographer to get a few shots of Colonel Parker, who was standing nearby. The Colonel said he didn’t mind if photographers “stole” a few shots, but he wasn’t going to pose. “Anything worth doing is worth doing for money,” he explained.

Also in his conversation with Jarvis that morning, Parker first mentioned the ham that would earn headlines in the Seattle papers the following week. “The Colonel had a Tennessee ham sent to him here and he was having it baked,” Jarvis reported. “He’d planned to sell me a couple of slices. But he liked my Thursday morning story about Elvis in Seattle so well that now he’s going to GIVE me a couple of slices.”

After filming concluded that second day, Elvis and his boys were spotted tossing a football around in the wide enclosed driveway bordered by the fair’s stadium, press center, and opera house. As some teenagers looked through fences, Elvis kept his black-jumpsuited companions sprinting here and there to catch his passes for more than an hour. “He can really toss ’em,” said a fair guard. “The guy surprises me.”

Apparently oblivious to the gathering crowd, Elvis, shirttail flapping, ran down return passes from his friends. Occasionally, he stopped to use his passing hand to comb his misbehaving hair back into place. Eventually he and his crew climbed into a black limousine sitting nearby and drove away. (To continue reading about Elvis in Seattle, click on the link below.) — Alan Hanson | © December 2008

Go to Elvis in Seattle: Part 2

"Elvis shook the reporter’s hand and said, 'Nice to have met you, sir.' In the writer’s column the next day, he wrote, 'That ‘Sir’ did it; I felt like a million years old.'"