Elvis in Hollywood:
Tales From His Movie Years

Elvis in Hollywood — It was The King of Rock ’n’ roll’s greatest dream to become a movie star. But Elvis soon learned that acting was much more challenging that singing. As a singer, Presley personally called the shots, both in the recording studio and on stage. As an actor, though, others—producers, directors, writers—were in control, and the young actor felt compelled to travel the road they mapped out for him. 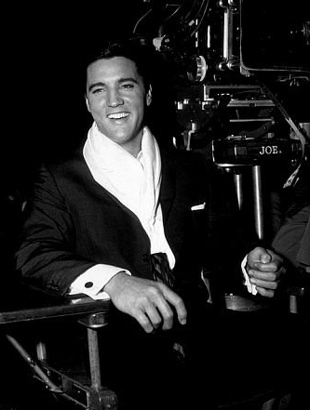 “I’ve talked to veteran actors,” Elvis said in a 1956 interview. “I’ve talked to a lot of producers and directors in Hollywood, and they all give you advice … they told me that I had good possibilities.” Still, he knew he needed guidance in his budding film career. “I have never read a line,” he admitted, “I never studied acting, never been in any plays or anything—I just got out there.” And yet he looked forward to the challenge. “I think I’m gonna enjoy it. I really do,” he predicted.

Over the next 11 years for Elvis in Hollywood, there were ups and downs as he starred in 31 theatrical films. Although his movie career is generally association with producer Hal Wallis at Paramount, where he appeared in 9 films, Presley actually made more pictures for Metro-Goldwyn-Mayer. Starting with Jailhouse Rock in 1957 and ending with The Trouble with Girls in 1969, Elvis appeared in 12 films for MGM. The studio also produced Presley’s 2 documentary films in the early ’70s.

• Elvis in Hollywood: The truth about Elvis' controversial Hollywood career

• From King Creole to G.I. Blues: How the Colonel Kept Elvis Alive in Hollywood

• Colonel Parker Interview: Elvis' manager talked about his movies in 1964.

• Elvis' Best Movies by Year: What if Elvis had made only one film per year?

• Elvis Movie Memories: Recalling the joy of seeing Presley's movies in the sixties.

• A Loving You Interview: Columnist Dick Williams talked with Elvis over lunch in 1957.

• Flaming Star: Behind the Scenes: A look at the production of Elvis' 1960 Western.

• Wild in the Country: Behind the Scenes: The making of Elvis' most dramatic film.

• Blue Hawaii: Behind the Scenes: of Elvis' 1961 blockbuster film.

• Kid Galahad: Behind the Scenes: Details about the making of Elvis' 1962 boxing film.

• Fun in Acapulco: Behind the Scenes of Elvis' 1963 Paramount film.

• Tickle Me: The Elvis movie that saved a Hollywood studio.

• Lizabeth Scott: The careers of Loving You costars Presley and Scott were headed in different directions in 1957.

• Juliet Prowse: Her role with Elvis was her big break in Hollywood.

• Anne Helm: She had Elvis all to herself in Crystal River, Florida.

• Ursula Address: The Bond girl co-stars with the King

• Nancy Sinatra: A Shaky Romance with Elvis in Speedway.

• Millie Perkins: Elvis' girlfriend in Wild in the Country.

• Jane Elliot: The young actress connected with Elvis in Change of Habit.