A Young Jane Elliot Connected
With Elvis in Change of Habit

“Elvis to me was tacky, kitsch America. That was my image of him. He was orange and turquoise like Howard Johnson’s. That was why I resisted doing the movie, because it represented something. To me, he was a truck driver with the greasy hair and the rolled-up sleeves. I didn’t relate. I was more Metropolitan Opera House and the Royal Ballet Company. At the age of thirteen, I was standing in line all day long for standing room-only tickets to the Bolshoi Ballet. That is what I did with my time.” — Jane Elliot to Bill Bram

In early 1969, Jane Elliot, a 21-year-old self-admitted private school “snob” raised on Manhattan’s upper east side, found herself playing Sister Barbara Bennett in Elvis Presley’s final film, Change of Habit. “I thought it was beneath me,” she told TV Guide of the casting in a 2014 interview. “It was not the kind of work I’d come to Hollywood to do.” 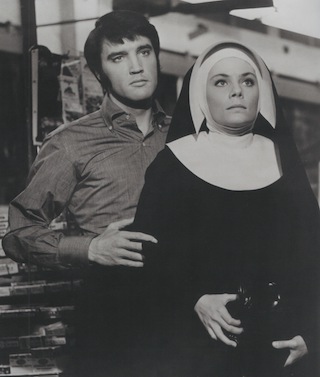 At the time she worked with Elvis, Jane thought his career was almost over. “He had become sort of a cult icon,” she recalled. “There were a few die-hard fans, but his music had dropped off the radar-screen years before, his movies were all tanking, and he was sort of a non-entity at that point. So it wasn’t like it was the beginning or what it was about to be. I would say, on the graph of his career, it was at the bottom.”

Admittedly not an Elvis fan then, Jane Elliot can be forgiven for not noticing that Presley’s career had already begun its revival by the time the two worked together on Change of Habit in March and April of 1969. Elvis’ highly acclaimed “Comeback Special” on NBC-TV had aired during the 1968 Christmas season and “If I Can Dream” reached #12 on Billboard’s Hot 100 singles chart in February. She could not have known the importance of Elvis’ January recording sessions at American Studio in Memphis, though one of songs he recorded then, “Rubberneckin’,” was used in Change of Habit.

Her youth and the negative image she had of Elvis at that time gave her a unique opportunity to build a relationship with him from the ground up. Unlike most others who worked with Elvis, Jane wasn’t awe-struck with him; in fact, her attitude toward him was quite the opposite. She recalls trying to bring Elvis down a notch the first day on the set of Change of Habit.

“We all had our names on our chairs. He was the only one that had a tall director’s chair. And I looked up at him, in my snotty little Manhattan private school way, and said, ‘Gee, don’t you feel self-conscious all the way up there?”

Jane Elliot remembered that moment during a fascinating interview conducted by premier Presley film researcher Bill Bram for his 2008 book, Elvis: Frame by Frame. Bram’s interview of Elliot was later adapted for use in Pal Grandlund’s Change of Habit book, published in Denmark in 2015. (Unless otherwise credited, all of the following comments by Jane Elliot come from Bram’s interview, as adapted in Grandlund’s book.) 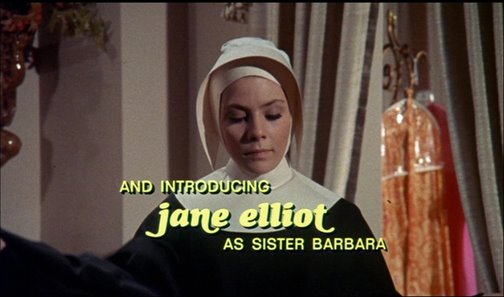 Elvis’ response to Jane Elliot’s condescending question opened the door to an unlikely and lengthy friendship between the two. “He looked down at me,” Jane recalled, “and he said, ‘You know, as a matter of fact I do.’ He got off the chair, he put it to the side, and he went over and he grabbed the chair that said ‘Guest’ on it and sat on the guest chair. He had somebody take his name off the tall chair and make a short chair for himself.”

Richard Bennett, an assistant director, told Bram that Jane Elliot spent a lot of time in Elvis’ dressing room during the filming of Change of Habit. From her responses to Bram’s questions, it’s apparent the two had conversations about profound issues in Elvis’ life. As he opened up to her, she not only began to understand the complexities of his life but also the naiveté of her own. For instance, they talked about racism. At first, Jane couldn’t understand why Elvis, who she said didn’t have a “racist bone in his body,” made no effort to change the racist attitudes of the guys working for him. She later came to understand why he was overly tolerant of others.

“Elvis … learned that, because of who he was and people’s preconceived ideas of who he was, there was always a chance he was going to bring the worst out in somebody—that they were going to take pot-shots at him. In order to be comfortable in his own skin, he had to understand their compulsion to knock him down a level, and that included me.” 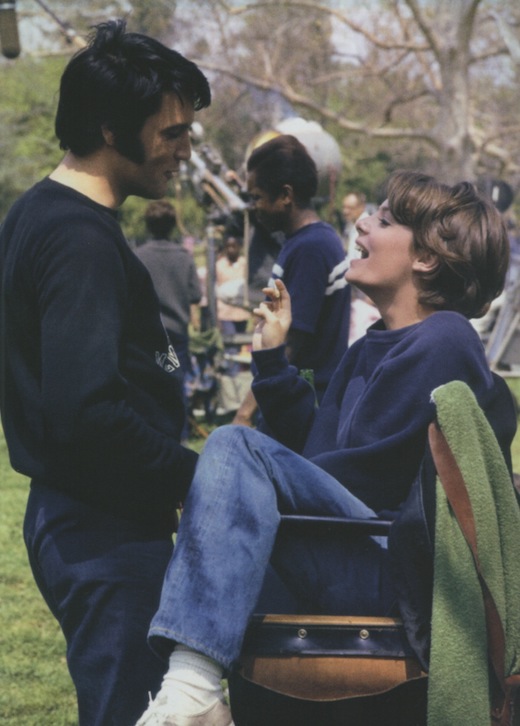 Jane understood then why Elvis responded so calmly to her “chair” comment. “I asked him why he didn’t say anything to me. Why did he just accept that? Why didn’t he say I was a rude little girl and should just shut up? He said it was because he had learned years ago that people were going to take pot-shots at him because of who he was … He had to accept my need to knock him down a level.”

During their conversations, Jane came to an unusual conclusion about Elvis’ relationship with Colonel Parker. She realized that Elvis felt he owed everything to the Colonel; that he never would have had the career he had without him. Jane understood that giving his manager fifty percent of his earnings was greatly excessive, but she dismissed the common feeling among Elvis fans that the Colonel was stealing from him. “You know what?” Jane declared. “Elvis signed up for that and Elvis felt that the Colonel deserved it … If Elvis chose to give the man fifty percent, that is his business and nobody has any right to butt into it.”

Not an Elvis fan at all when she first met him, Jane Elliot came to understand the allure he had for everyone around him. She felt that Elvis didn’t completely understand the attraction and down deep didn’t think he was worthy of it. Still, it was so strong that even the initially dismissive Jane felt it. “He was so charismatic,” she realized, “that, if he came and asked you for something, to say ‘yes’ to him—even if it was to his own detriment … to be needed by him … to have something that he wanted from you—was intoxicating.” That strength of Elvis’ attraction helps to explain why even those nearest to him couldn’t bring themselves to say “no” when he needed to hear it most. 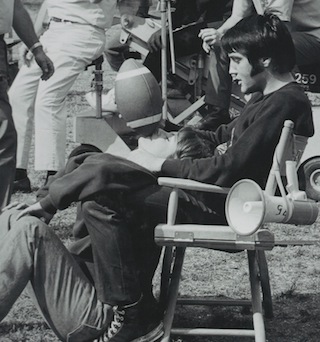 Jane Elliot saw some troubling conflicts in Elvis’ life. “He had a simple heart, a very pure heart, and a very complicated mind,” she noticed. “If the voices in your head are too loud, if there is too much conflict in your head, it doesn’t matter how pure your heart is, it is going to fuck you up. It just is. This is a guy who could have benefitted from therapy.”

She noted, however, that at that time therapy didn’t have a good reputation, and that Elvis would appear vulnerable if he asked for help to sort out the contradictions in his mind. “He had too many people depending on him, milking him dry, and setting him apart. There was no way he could let anybody down by showing a crack in the armor. I think he had an incredible fear of what he was going to find out once he started digging.”

Helping Elvis exorcise his demons, however, was beyond the ability of a 21-year-old actress on a film set in 1969, so Jane Elliot had to settle for playing her part in Presley’s last film. At the time, she was impressed with his professionalism as an actor.

“He was a good soldier. He showed up on time and he did his job. He knew his lines and he never got back late from lunch. He was never late in the morning. Whatever the script said he was going to do. He didn’t complain. He didn’t waste anybody’s time. He was a very, very respectful—obedient, for lack of a better word—Hollywood actor. He had none of the drama or the primadonnaism that exists today—none of it.”

During his Hollywood career, Elvis received very little praise for his acting. Jane Elliot admits that back in 1969, Elvis’ work in Change of Habit seemed “too reserved … too close to the vest like he wasn’t giving enough of himself.” On watching the film 35 years later, though, she believes Elvis gave a “stand-out” performance in the movie they did together.

“Acting has evolved … Styles of acting have changed as the decades go on and his work then, which may have seemed stingy, is now dead on the money. His work was very honest and very simple … Me, Barbara and Mary were acting. We were playing parts … Barbara had her characterizations, I had mine and Mary had hers. Elvis was just present and authentic, and he wasn’t trying to be a doctor. He wasn’t trying to do anything. He was just simple and authentic, and that’s the kind of work that has lasted through time. The rest of us have had to tone in back.”

Elvis Presley never looked more physically fit than he did when working on Change of Habit in 1969. Still, Jane Elliot was not surprised by what happened to him over the next eight years. Unlike many others, she didn’t blame the drugs for his downfall, but rather his diet.

“He ate so badly. You cannot abuse the body. He ate no green vegetables. He ate no salads. He ate steak, bacon and eggs, and peanut butter. His diet was so, so, so bad. He wasn’t drinking—it wasn’t an alcohol thing … but his food-obsession was so profound. You just knew this guy was going to run his body into the ground.”

In her 2014 TV Guide interview, Jane Elliot said Elvis Presley won her over the first day on the set of Change of Habit. “I did a complete 180,” she said of her attitude toward him. “Elvis was a lovely, lovely man, a real gentleman and so sweet and fun and funny. I had the best time working with him and everyone else.” Photos taken on the set confirm the playful relationship between the 21-year-old actress making her first film and the 34-year-old superstar making his last. — Alan Hanson | © October 2016

“Elvis learned there was always a chance he was going to bring the worst out in somebody—that they were going to take pot-shots at him. In order to be comfortable in his own skin, he had to understand their compulsion to knock him down a level.”