Examining Elvis Books …
Which Ones Tell the Truth?

There're a million different Elvis books out there. Well, that's probably an exaggeration, but certainly there has been a flood of volumes published about the man since his death in 1977. And there's no end in sight. In 2007 an average of two Presley books hit the market each month. The problem for those seeking credible information about Elvis is this: Which books are worth reading? Which ones tell the truth? 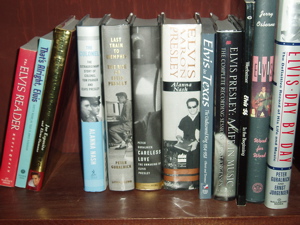 Unfortunately, many of the books about Elvis in recent years mix half-truths and bias to distort his real legacy. At one end of the spectrum are the Elvis detractors, best typified by Albert Goldman's spurious biography, Elvis, published in 1981.

Much more numerous, but just as untrustworthy, are books written by the Elvis myth-makers. In their efforts to exalt Elvis, they credit him with either false or exaggerated accomplishments. In doing so, they defeat their own purpose. Instead of the exciting entertainer that he was, such books depict Elvis as a some kind of freak who instigated riotous behavior wherever he went.

While writing Elvis’57: The Final Fifties Tours, my goal was to be as accurate and objective as possible (not easy for an Elvis fan). There are other books, such as Peter Guralnick's two-volume biography and Scotty Moore's autobiography, that also strive to earn the reader's trust through a factual and balanced look at Presley's life and work.

Of course, most of the commercially successful books about Elvis have been written by those who knew him—relatives, friends, fellow entertainers, employees, hangers-on, and so forth. Some of these volumes tell the truth, others tell fans what they want to hear, while still others contain half-truths and falsehoods.

My purpose here is to review Elvis books with an eye for historical honesty. In addition to current books, some older volumes will be included, especially some that in my opinion belong in every public library, as well as on the shelf of every Elvis fan. Hopefully, these reviews will help you decide which Elvis books out there are worth reading. Check out the links below. — Alan Hanson (February 2008)

• A Basic Elvis Library: Ten essential books that should be in the library of every Elvis Presley fan.

• Elvis: The Movies: Absolutely the best book about Elvis movies ever! Contains reviews of all his 33 films and over 500 pictures of Elvis.

• That’s Alright, Elvis: Scotty Moore's book is still the best among the dozens of volumes written by Elvis' acquaintances.

• Private Presley: The Missing Years—Elvis in Germany: Andreas Schröer recalls Elvis's military tour in Germany, where he met his future wife and started down the road to prescription drug addiction.

• Elvis ’57: The Final Fifties Tours: In his review David Neale calls this volume "one of the best Elvis books in many a year."

• Elvis: What Happened? At the time of his death, three of Elvis' bodyguards revealed details of his bizarre private life. Their story about their former boss remains a flawed but important Elvis biography.

• Elvis '56: In the Beginning: Alfred Wertheimer's first book about his classic photos of Elvis in 1956.

• As Seen on TV in the 1950s: Author Karal Ann Marling examines the impact of Presley on the small screen in 1956.

• Looking Back to See: Maxine Brown reveals Elvis Presley's early connections with country music and describes the relationship between Elvis and The Browns in the 1950s.

• Iconic Voices: Elvis comes back to life with a vengeance in this book by W.A. Harbinson.

• Elvis: My Best Man: George Klein's long-awaited book is the best by an Elvis insider.

• Elvis Collectors Edition: Costco-sold collection of artifacts, DVDs, and a biography is a mixed bag.

• Elvis: Behind the Legend: Trina Young's 2015 set of essays is a different kind of Presley book.

• Lennon and McCartney: The ex-Beatles comment on Elvis in Philip Norman's separate biographies.

• A Little Thing Called Life: Linda Thompson recalls her years as Elvis' girlfriend in the seventies.

• Elvis Presley: A Boy From Tupelo: Ernst Jørgensen chronicles how the music converged in Elvis during his youth in Tupelo and Memphis.

• Elvis and Ginger: Ginger Alden gives her account of the relationship she had with Elvis during the last nine months of his life.

• Counting Down Elvis: His 100 Finest Songs: You'll disagree with Mark Duffett's list, but you'll love the vast amount of information he gives.