Elvis: Behind the Legend …
A Different Kind of Presley Book

A new Elvis book came out recently, as one seems to every week. Unlike most of them, though, this one caught my eye because it was not another tell-all volume, but rather a researched one with a unique format. For Elvis: Behind the Legend, author Trina Young gathered information from a variety of sources to write 32 short (2-4 pages) essays on various facets of Presley lore. 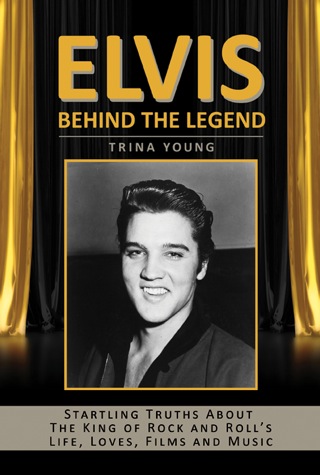 For a Presley book, Elvis: Behind the Legend is short one, barely over 100 pages of text, followed by 30 pages of appendices and chapter notes. Each essay is labeled with a chapter number and title. Although the episodes generally appear in chronological order, no attempt was made to link them in a continuing narrative. Each essay stands alone and can easily be read in under five minutes.

The main sources used to support the author’s views are Presley’s own words and quotes pulled from accounts published in books, magazines, newspapers, and other sources. As I read, I found myself often consulting the 11 pages of chapter notes to identify the sources of interesting statements.

In the subtitle to Elvis: Behind the Legend, Young sets a high bar for her collection of essays. “Startling Truths About The King of Rock and Roll’s Life, Loves, Films and Music,” it reads. Then, in closing her introduction, she promises, “By looking beneath the surface, this book gives music fans an insight into The King of Rock and Roll like never before.”

There’s perhaps a little too much hype going on here. Elvis fans will find few "startling truths” in the essays, and the amount of insight obtained depends on how much the reader has learned about Elvis from other sources. Still, there is much in Elvis: Behind the Legend that was new to me, and Young’s interpretations and conclusions are often unique.

Early on, the author introduces a theme to which she would return often in later essays. “The irony is that a young Elvis Presley, who would soon get labeled as ‘The King of Rock and Roll’, saw himself more as a balladeer,” Young notes. She asserts that as a youth Presley really wanted to be a pop crooner like Dean Martin, and “rode the wave” of rock and roll primarily as a path to fortune and fame. Elvis fans reading Elvis: Behind the Legend will probably get defensive when Young suggests that Presley abandoned rock and roll after his army hitch, but she correctly points out that Elvis was following his heart. “There were many factors at play for Presley’s subtle shift in musical style and image,” she explains. “The main reason being that his true passions were emerging.”

• Elvis and The Beatles

The book’s “About the Author” page states, “Trina Young is a freelance entertainment journalist who has been writing about Elvis Presley and The Beatles for several years.” A brief online search reveals that she has written much more about The Beatles than about Elvis. Her interest in the Fab Four explains why four of her essays in Elvis: Behind the Legend focus on connections between rock music’s two biggest acts. In fact, she closes the text portion of her book with an essay addressing the question, “Who Was Bigger: Elvis Or The Beatles?” She attacks the question by focusing on domestic and worldwide record sales. No spoiler alert here, though. You’ll have to read the essay to find out how Young answered that great cosmic question.

Among my favorite essays in Elvis: Behind the Legend explores the connection between Presley and another perceived musical rival, Bob Dylan. (In 2008, Rolling Stone’s ranking of the “100 Greatest Singers of All Time” had Presley at #3, Lennon at #5, and Dylan at #7.) Young’s summary of Dylan’s feelings about Elvis is well written and inspiring for Elvis fans. 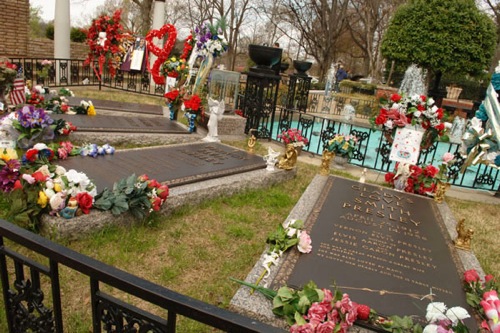 Among other essays that I found interesting was one explaining why Elvis never attended the premieres of his own movies. Also particularly informative are the chapters describing Presley’s Palm Springs home and detailing the history of the Meditation Garden at Graceland.

• A balanced view on Elvis’s death

In one of her longest essays, Young summarizes some of the major issues following Elvis’s death. She assesses the impact of the tell-all book by Elvis’s bodyguards and of Presley’s drug use as a factor in his death. In doing so, Young maintains a measured distance from the passions of the time and offers a balanced view on Elvis’s death.

Young also provides an outsider’s assessment of Elvis’s films. Of his Hollywood career, which is routinely slammed by critics and Elvis fans alike, Young provides the following precise summary analysis:

“When all was said and done, Elvis had achieved his lifelong ambition to become a successful movie star—even though the films did not always provide fulfilling roles. Whether he liked it or not, Elvis’ onscreen image as a happy-go-lucky singing ladies’ man helped him become one of the biggest movie stars of the 1960s.”

• The strange claims of an exotic dancer

The only time Young may have over-reached in pursuit of “startling truths” about Elvis is in giving credence to the story of a Japanese burlesque dancer named Tura Satana, who not only claimed to have been romantically involved with Elvis but also asserted that she taught Presley the “bumps and grinds” he used in his ’50s stage shows. The only source for this story appears to be a 2011 interview article in Chicago Magazine. Ms. Satana’s tale certainly is startling, as promised in the book’s subtitle, but is it truth? Well … let’s just say it would be nice to have more corroboration before giving Ms. Santana’s story that lofty label.

In the simplicity of her language and her  honest, historical perspective, Trina Young displays an ability to see and communicate what truly motivated Elvis Presley. There’s no wasted wordage to be found in her writing here, and the respectful distance she maintains from her subject allows her to appraise Elvis through the unbiased eyes of a music historian. Elvis: Behind the Legend is an easy read and an enjoyable one, especially amidst the flood of depressing Presley tell-alls that have sullied Elvis's legacy in recent years. | Alan Hanson (© September 2015)

Check out the Elvis: Behind the Legend website at:

"In the simplicity of her language and her  honest, historical perspective, Trina Young displays an ability to see and communicate what truly motivated Elvis Presley. There’s no wasted wordage to be found in her writing here, and the respectful distance she maintains from her subject allows her to appraise Elvis through the unbiased eyes of a music historian."