Shortly before Christmas 2012, I was strolling down the book aisle at my local Costco store when the name "ELVIS" in three-inch high letters caught my eye. It was on the slip cover of a packaged collection titled, ELVIS: The Official Collector’s Edition. On the open side of the slip cover, the spines of what appeared to be three 8 ½" X 11" books were visible. They were titled, “King of Rock and Roll Elvis,” “Memories of Elvis,” and “The DVD Archive Elvis.” The entire set was shrink wrapped, so I was unable to pull out and examine each book. An info sheet on the back of the slip cover, however, identified the contents as a 256-page Elvis biography, a collection of 20 replica artifacts from Elvis’s life, and a set of 10 Elvis archive DVDs. 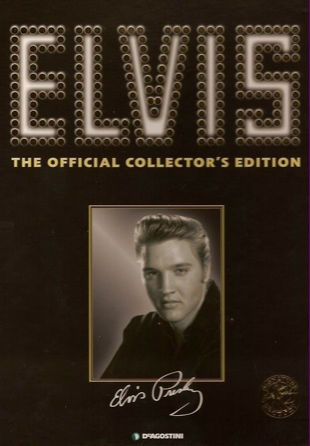 The price of $79.99 caused me to pause … but only momentarily. The package carried Elvis Presley Enterprises’s stamp of endorsement, so I judged its contents probably weren’t completely rubbish. So, I decided to buy myself one as a Christmas present on the chance, remote as it might be, that this “Official Collector’s Edition” would contain something new and interesting about Elvis.

The set is a product of DeAgostini Publishing. The company’s website describes it as “one of the world’s largest illustrated publishers, with a broad presence in Europe, Asia and Latin America.” DeAgostini further proclaims itself to be “the world leader in the continuity and collections market,” hence its issuance of said Presley product.

Its Elvis—The Official Collector’s Edition line, which debuted in the United Kingdom in 2007, consisted originally of regular issues of an Elvis magazine, with photos, replica artifacts, and mini-posters all provided by the archives at Graceland. In January 2012, DeAgostini launched its Elvis—The Official Collector’s Edition program in Germany, adding DVD’s to its bi-monthly magazine, artifacts, and mini-posters. I’m guessing the U.S. Costco box set was compiled from the material previously issued in the UK and Germany.

• “The Ultimate Elvis Biography” … it's not

I don’t get too excited about artifacts and DVDs, so it was primarily the book that got me to plunk down my eighty bucks. The package info sheet labeled it “The Ultimate Elvis Biography” and promised it contained “the untold story” of Elvis’ public and private life. “Untold,” huh … surely, then, it was going to teach me some things about Elvis that I didn’t know.

When I opened the package and pulled the book out, I immediately noticed that no author was named on the cover. I checked the title page … no author listed there either. The “Acknowledgements” on the book’s final page were no help. It listed an “Editor” (Joff Brown) and a “Consultant” (Andrew Hearn, publisher and editor of Essential Elvis magazine) but no author. C’mon now! How can a publisher proclaim this volume “The Ultimate Elvis Biography” without providing the name of the author(s) responsible for its content? I was shaking my head before even turning to page 1. 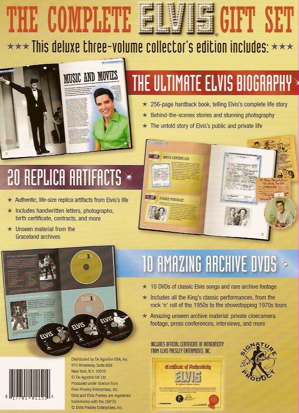 The “Focus” sections are set in eye-catching red boxes with an appropriate photo. In fact, the book’s attractive design is its best feature. The entire volume is printed in full color from beginning to end with hundreds of photos, many of them full-page size, taking up at least two-thirds of the book’s total space. The text is often pleasantly wrapped around pictures or burned over colored backgrounds and photos. The many images used to supplement the text certainly help the reader visualize the episodes being described.

The text itself, unfortunately, in addition to being the work of an anonymous author, lacks the attribution that a creditable biography must have. There are no chapter notes to identify sources of information or to credit opinions. There is no bibliography of the sources that were consulted. In the text, quotes are identified occasionally as coming from earlier  books on Presley by Peter Guralnick, Ernst Jorgensen, Jerry Schilling, Priscilla Presley, and others. Having recently read George Klein’s Elvis: My Best Man, I spotted a number of uncredited references obviously paraphrased from that volume. Clearly, the DeAgostini volume relies extensively on previously published Elvis bios for its content. As a result, in spite of the promise in its Introduction that it would reveal “a few unexpected sides of The King,” this new biography offers very little, if any, new knowledge about Presley’s life or career.

• Next time, check with Scotty first

One book that the DeAgostini writer obviously didn’t consult was Scotty Moore’s That’s Alright, Elvis. Of the troubled charter flight from Amarillo to Nashville on April 13, 1956, we’re told in this new volume that, “the plane began to plummet, causing panic in the cabin.” Scotty was in that plane, and he reported only a momentary engine problem. He recalled no “panic in the cabin” and the aircraft certainly didn’t “plummet.” Also, the DeAgostini writer repeats George Klein’s belief that Scotty and Bill’s break with Elvis in 1957 somehow had something to do with the musicians’ refusal to stay at the same hotel as Elvis. The author didn’t seem to realize that it was not a personal decision, but instead a financial one. Scotty and Bill chose not to stay at the luxurious Beverly Wilshire Hotel because they had to pay all their expenses from the measly $200 a week that Elvis paid them at the time.

I have to give the author credit, though, for being one of the few writers who didn’t buy into Colonel Parker’s biggest snow job ever, that being that over a billion people saw Elvis’ 1973 Aloha satellite TV special. The assertion in the new bio that “millions” saw that show is a far more reasonable estimate.

From the very beginning, it’s obvious that the unnamed author is an unabashed Elvis fan. Unsubstantiated declarations of Presley’s sanctity appear regularly. For instance, the author claims that in 1955 “the new singing sensation was selling out venues—fast,” and that he played constantly to “ecstatic audiences,” with nothing to substantiate either claim. We’re told Love Me Tender opened in 1956 to “record-breaking takings.” Well, exactly what records did it break? None that I know of. The love fest continues with the author attaching modifiers like “phenomenal,” “triumphant,” “majestic,” “fabulous,” and “magnificent” to various Elvis performances, none of which, I’m guessing, he personally witnessed. Oh, and did you know that Elvis and Priscilla were “two of the most beautiful people in the world”? It’s in the book.

Strangely, though, the DeAgostini author departs from a common attitude among the Presley faithful by consistently portraying Colonel Parker in a positive light. There’s praise for Parker’s publicity skills and for the way he got RCA to give Elvis total control over his recording sessions. Even as Elvis’ life crumbled in the few years before his death, the Colonel is described as doing all he could to help him.

I read the DeAgostini biography over the course of three days, and although up to this point it must sound like I didn’t care for it, about mid-book I began to find it more interesting. The righteous praise for Elvis began to give way to recognition of his increasingly erratic behavior in the mid-seventies. Joyce Bova’s aborted pregnancy is even mentioned, something devoted Presley fans would rather have seen swept under the rug.

As Elvis’ funeral brought me to the final pages of the volume, I came to the conclusion that the DeAgostini biography has a legitimate place on the shelf along side other acceptable Presley biographies of the past. Discounting its occasional inaccuracies and biases, this bio provided me an opportunity to revisit, in condensed fashion to be sure, Elvis Presley’s life in all its glory.

So, I’m going to give this book by an unnamed author a thumbs up. It’s certainly not the “ultimate” biography of Presley that its publicist declared, but with its colorful design and hundreds of photos, it’s much more digestible fare for the average Elvis fan than Peter Guralnick’s two-volume definitive biography.

• DVDs and artifacts … the good, the bad, and the ugly

As for the 10 DVDs in the DeAgostini package, it’s a mixed bag. The first five contain “Elvis’ No.1 Hit Performances” and the three complete Ed Sullivan Shows, all of which have been previously available on DVD separately. Two more DVDs reprise long accessible Presley press conferences and radio interviews. The boring 1974 Memphis karate footage on another DVD is so pitiful that it’s virtually unwatchable. That leaves the two DVDs labeled Elvis in the Army and Behind the Scenes as the best of the bunch. The raw, silent footage on each helps to reveal the human side of Elvis Presley.

The 20 replica artifacts range from Elvis’ birth certificate to a Las Vegas dinner show menu. The best of the lot, however, are a Dixie Locke love letter and the first Parker-Presley contract from 1955. The latter certainly reveals that Colonel Parker had total control over Elvis’ career from the very beginning. — Alan Hanson | © January 2013

"In spite of the promise in its Introduction that it would reveal 'a few unexpected sides of The King,' this new biography offers very little new knowledge about Presley’s life or career."