Lennon and McCartney Comment
On Elvis in Philip Norman's Bios

Over the past 50 years, much has been written about Elvis Presley and the Beatles. Fans of both have argued for years about the music, the record sales, and the cultural impact of one versus the other. Both Presley and Fab Four are known to have made both positive and negative comments about the other. And many accounts have been written about the legendary meeting in August 1965 at Elvis’s home in Los Angeles. 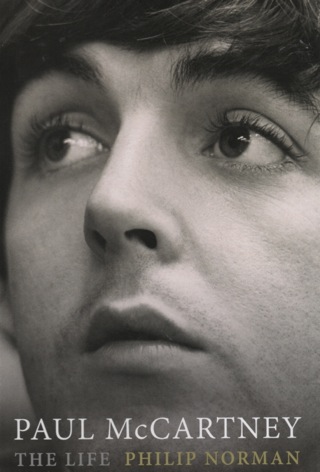 With each new published book by Presley or Beatle insiders, a little bit more is revealed about the connections between rock music’s two most iconic acts. One such volume published in 2016 was rock music author Philip Norman's Paul McCartney: The Life. It’s a follow-up to Norman’s 2010 John Lennon: The Life. The two mammoth books (well over 800 pages each) are considered by many the best life accounts of the two former Beatles. Norman sought and received approval from Yoko Ono and McCartney before starting his research for the separate books. Norman’s research focused on interviews of Lennon and McCartney insiders and on comments made in the past by the two men. To maintain objectivity, Norman did not interview McCartney for his new biography.

Although it’s generally acknowledged that Elvis Presley was a major influence in the early musical lives of Lennon and McCartney, his name pops up only occasionally during Norman’s long chronicles of the ex-Beatles’ lives. As expected, Presley gets his greatest play in Lennon and McCartney’s first contact with American rock ’n’ roll. John was 16 and Paul was 14 in 1956 when they first heard of Elvis Presley. The new American rock ’n’ roll sensation infected John and Paul separately, since they did not meet until the following year.

According to Norman, John first learned about Elvis from a reference in an issue of the British publication New Musical Express. He didn’t know what to think at first:

“The music papers were saying Presley was fantastic, and at first I expected someone like Perry Como or Sinatra. ‘Heartbreak Hotel’ sounded a corny title, and his named seemed strange in those days. But then when I heard it, it was the end for me … I remember rushing home with the record and saying ‘He sounds like Frankie Laine and Johnnie Ray and Tennessee Ernie Ford.”

Paul was originally impressed by Elvis’s appearance. “I first saw his picture in a magazine,” he recalled. “I think it was an ad for ‘Heartbreak Hotel’ and I thought, ‘Wow! He’s so good looking … he’s perfect. The Messiah has arrived.”

• “Heartbreak Hotel” made the guitar an “offensive weapon”

Norman emphasizes that the guitar Elvis seemed to be playing in the photos that John and Paul saw gave them some new-found respect for the instrument, which until then was the “most anonymous of all musical instruments” in Britain. That respect crystalized when they heard that first Presley record. Norman explained:

“When John first heard ‘Heartbreak Hotel,’ the whole edifice of rumor and ridicule that the media created around Presley instantly melted away. All he needed to know was in the song’s opening fanfare—that anguished, echoey cry of ‘Well, since my baby left me …’  answered by double stabs of high treble electric guitar … to an adolescent in 1956 who’d never heard a guitar as an offensive weapon, they were stupefying. No sound ever had been, or ever would be, more perfectly tuned to hormones going berserk.”

Paul’s musical father had started his son playing the trumpet, but after hearing Elvis, Paul took the horn back to the department store it came from and traded it for a £15 Zenith guitar. After “Heartbreak Hotel” came out, Norman says Paul and his friend George Harrison talked often about Elvis —“his astounding voice, his amazing clothes, the guitar that seemed his indispensable accomplice in whipping up female frenzy.”

In his Lennon biography, Norman noted that John was equally infected with all things Elvis: 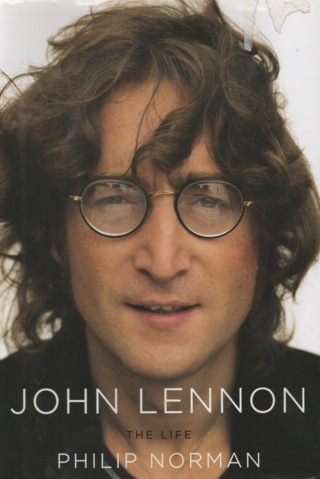 “In common with his other British converts, John obsessively read and reread every newspaper story about Presley, cut out and saved every magazine picture of him, pored over every detail of his hair, clothes, and sublimely sullen face for what it might reveal of his private character and lifestyle.”

The rest of 1956 brought other Presley records to Britain—“Blue Suede Shoes,” “I Want You, I Need You, I Love You,” and “Hound Dog.”  Each, says Norman, “drew John still further into this intoxicating new world where guitars rang like carillons of victory bells, pianos pounded like jackhammers, and drums spat like machine guns. Each announced more joyously than the last that life need not be the gray, humdrum vista he and his fellow war babies had always known.” Elvis had transformed John’s world.

An interesting interlude in Norman’s Lennon bio concerns how John’s mother and aunt reacted differently to his obsession with Elvis. John’s mother Julia “adored” Presley’s records and thought he was a “dish” to look at. She bought John his first real “rock ’n’ roll clothes.” But family issues dictated that John live, not with his mother, but nearby in the Liverpool home of his aunt Mimi. John’s fixation with Elvis became too much for her. “It was nothing but Elvis Presley, Elvis Presley, Elvis Presley,” she recalled. “In the end I said ‘Elvis Presley’s all very well, John, but I don’t want him for breakfast, dinner and tea.’”

As for Paul, Norman noted that the sound of Elvis songs like “Hound Dog,” “Blue Suede Shoes,” and “Teddy Bear” helped soothe the pain of the recent loss of his mother to cancer. Paul especially liked “All Shook Up.” Although Paul’s voice was the “lightest alto,” he could do a perfect imitation of Elvis’s “mumble” in “All Shook Up.”

• John and Paul impressed by other American rockers

By the time John and Paul first met on July 6, 1957, both had come to appreciate other American rock ’n’ rollers, including Little Richard, Chuck Berry, Fats Domino, Eddie Cochran, and Gene Vincent. Inevitably, their belief that Elvis was the end-all of rock music began to fade. John remembered how first hearing a Little Richard record challenged his loyalty to Elvis:

“The most exciting thing … was when (Little Richard) screamed just before the solo. It used to make your hair stand on end. When I heard it, it was so great. I couldn’t speak. You know how it is when you are torn. Elvis was bigger than religion in my life … I didn’t want to leave Elvis. We all looked at each other, but I didn’t want to say anything against Elvis, even in my mind.”

As John and Paul’s partnership developed, Elvis’s direct influence slowly faded away. As singer-songwriting-guitar players, the duo found a mentor in Buddy Holly. Both also admired the close vocal harmonies of the Everly Brothers. Then in 1958, Presley was taken off rock music scene completely. As John famously said on hearing of Elvis’s death in 1977, “Elvis died the day they put him in the Army.”

• Only Paul could relate to the post-army Elvis

While Presley was in the military, the Beatles were paying their dues and honing their musicianship playing long sets in dingy basement clubs in Liverpool and Hamburg. When Elvis emerged from the Army in 1960, John, at least, could no longer relate to him musically. Norman provided a lackluster description of Presley, as John might have viewed him then:

“It was, of course, not quite the same Elvis … Now thirty years old, Presley had abandoned not only rock ’n’ roll but live performances of any kind, instead turning out a series of increasingly bland and forgettable Hollywood movies … Though he still had occasional chart hits, they were middle-of-the-road pop, devoid of his old sneering sexual magic. In America, he was as embarrassing a symbol of a craze-gone-by as bobby sox or the hula hoop; in Britain, even his most loyal fans had given up hope that he’d ever return to form.”

For Paul McCartney, however, rock ’n’ roll and pop music could coexist, and that allowed him to appreciate some of Elvis’s music in the Beatles’ early days. Norman provides an interesting anecdote about John and Paul when they were working in Hamburg in 1960. Brian Griffiths, a fellow Liverpudlian also working in Hamburg, tells the story:

“About nine o’clock the next morning, we were walking back to the Indra and as we get closer, we hear a noise … it’s Paul, alone in the empty club, practicing Elvis’s big ballad of 1960, ‘It’s Now or Never.’ John goes, ‘Oh, what the frig’s he doing that sort of crap for?’ To John, the only Elvis tracks worth anything were things like ‘That’s All Right, Mama’ and ‘Mystery Train.’ But Paul knew they couldn’t get through the night only on rock ’n’ roll and they had to appeal to the German audience. So he’d also do ‘Wooden Heart,’ from Elvis’s GI Blues, complete with the verse in German.”

Norman describes how later on stage Paul, “would press doggedly on with ‘It’s Now or Never’ as the fists flew and flick-knives flashed.”

Norman never mentions Presley in his account of the Beatles rise to worldwide fame over the next few years. Elvis doesn’t come back into the lives of John and Paul until the Beatles met him on August 27, 1965. The Beatles were on top of the musical world, having just 12 days earlier made their historic appearance at Shea Stadium in New York.

Besides going over the well-known details of the summit at Presley’s Bel-Air neighborhood home, Norman provides comments later made by both John and Paul about the meeting. First, John:

“At first we couldn’t make him out. I asked him if he was preparing any ideas for his next film and he drawled: ‘Ah sure am. Ah play a country boy with a guitar who meets a few gals along the way, and ah sing a few songs.’ We all looked at each another. Finally, Presley and Colonel Parker laughed and explained the only time they departed from that formula—for Wild in the Country—they lost money. He was just Elvis, you know? … He seemed normal to us, and we were asking about his making movies and not doing any personal appearances or TV … He was great: just as I expected him.”

For Paul, Norman says there was a bit of sadness associated with meeting his “hero of heroes,” realizing that the Beatles had actually achieved their manager Brian Epstein’s prophecy that they would be “bigger than Elvis.” Later Paul would lament, “We never wanted to beat him. We wanted to coexist with him.”

In his separate biographies, Philip Norman portrayed Elvis Presley as playing similar roles in the lives of John Lennon and Paul McCartney. In 1956 Elvis’s music and style revealed to both the power of rock ’n’ roll, giving the two British teenagers the inspiration to express their imaginations in their music. John and Paul had greater musical mentors in Buddy Holly and Chuck Berry, but it’s possible they would never have connected with them had Elvis not first opened their minds to the freedom inherent in American rock ’n’ roll music.

After all, it was only after hearing Elvis in 1956 that John Lennon first understood the meaning of life: “Rock ’n’ roll was real. Everything else was unreal.” — Alan Hanson | © September 2016

"John and Paul had greater musical mentors in Buddy Holly and Chuck Berry, but it’s possible they would never have connected with them had Elvis not first opened their minds to the freedom inherent in American rock ’n’ roll music." 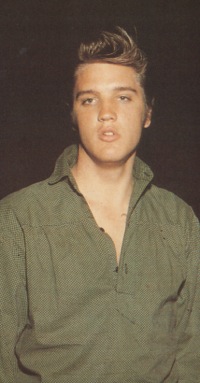 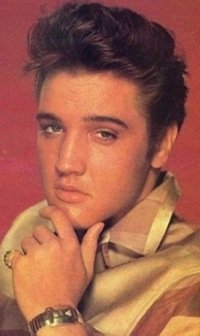