“Colonel Parker’s Secret Rules for Elvis Scriptwriters”—In June 2009 that’s how the original Elvis blogger, Phil Arnold, titled one of his weekly entries on his popular web site, ElvisBlog. Phil then proceeded to list seven rules that the Colonel insisted be followed by those who wrote movie scripts for Elvis during his career. I smelled a rat as soon as I started reading the list, since I knew Parker never had, nor wanted to have, any control over the scripts for Elvis’ movies. Sure enough, at the end of list, Phil fessed up that he was just foolin’ with us. He admitted that Colonel Parker never had such a list of rules, and the ones Phil had presented were based on a blog article he had read five years previously. 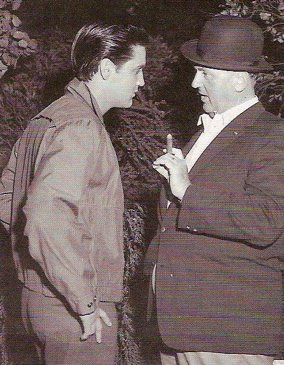 Still, Phil’s posting was indicative of a myth that has long been believed by Elvis fans, that being that Elvis could have been a great actor in serious roles if only Colonel Parker had not forced him to continually make silly, second-rate films. Now, I want to make it clear that I’m not an apologist for the Colonel. On a personal level, it’s clear that he could be, and often was, a jerk. It’s known that he mistreated Tom Diskin, his personal assistant, for years, and many others have testified to Parker’s overbearing and arrogant attitude.

However, on the charge that he meddled in the writing of Elvis’ movie scripts, I feel compelled to come to the Colonel’s defense. A January 1964 article in Variety explained the nature of the contracts that Elvis and his manager signed with the Hollywood studios:

“The Presley-Parker tandem is one of the few star-powered forces in Hollywood which limits its demands to cash. Once a deal is made, the studio takes complete control of a film, the Presley camp having no say-so on cast, script or production costs.”

In the same article, Parker stated his philosophy concerning these “no say-so” Hollywood contracts. “We don’t have approval on scripts—only money,” the Colonel explained. “Anyway what’s Elvis need? A couple of songs, a little story and some nice people with him. We start telling people what to do and they blame us if the picture doesn’t go. As it is, we both take bows and if it doesn’t hit maybe they get more blame than us. Anyway, what do I know about production?—nothing."

• Want to Assign Blame?—Start at the Top

For those who feel the need to assign blame for Elvis’ less than stellar Hollywood career, there are several suspects more worthy of guilt than Colonel Parker. Let’s start with Elvis himself. He signed every one of those Hollywood contracts with the full knowledge that he would have no creative input. In fact, by the end of 1962, Elvis had decided that starring in light-weight musical comedies was his proper role in Hollywood. He stated as much to writer Lloyd Shearer on the set of It Happened At the World’s Fair in late 1962. 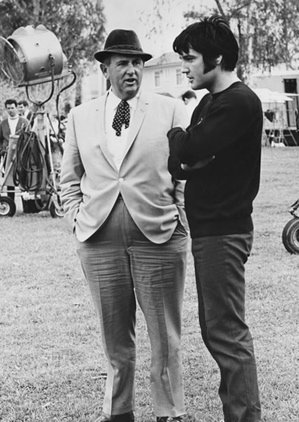 “I’ve had intellectuals tell me,” Presley told Shearer, “that I’ve got to progress as an actor, explore new horizons, take on new challenges, all that routine. I’d like to progress. But I’m smart enough to realize that you can’t bite off more than you can chew in this racket. You can’t go beyond your limitations.

“They want me to try an artistic picture. That’s fine. Maybe I can pull it off some day. But not now. I’ve done 11 pictures, and they’ve all made money. A certain type of audience likes me. I entertain them with what I’m doing. I’d be a fool to tamper with that kind of success. It’s ridiculous to take it on my own and say I’m going to appeal to a different type of audience, because I might not. Then if I goof, I’m all washed up, because they don’t give you many chances in this business. If you’re doing all right, you better keep at it until time itself changes things.”

• Hollywood producers and Elvis’ fans are responsible too

Next in line to blame for Elvis’ unpretentious movies are the studio executives and producers. They learned early on that they could make a lot more money starring Elvis in light musical comedies than in dramatic roles. They learned that lesson in 1960, when G.I. Blues and Flaming Star came out within a month of each other during the holiday season. The head-to-head battle of Presley films was one-sided. G.I. Blues reached as high as number two on Variety’s weekly list of top-grossing films and finished 14th in the publication’s list of annual box-office ratings. Flaming Star, by comparison, peaked at number 12 in the weekly listings and finished far down among the year’s top grossers.

The 11 songs in G.I. Blues fed sales of the film’s successful soundtrack album, which, in turn led to multiple viewings of the film by the Presley faithful. With nothing more than a title song and a jig in Flaming Star, there was no such payoff in the record stores. Then, when Blue Hawaii again paid off doubly big the following year, both studio execs and Elvis himself realized that there would be no more of this “serious actor” stuff in Elvis’ future.

That leads us to the third group responsible for the kind of movies Elvis made—his own fans. We flocked to theaters to see films like Blue Hawaii, Viva Las Vegas, and Girl Happy. We weren’t nearly as interested in films like Flaming Star, Wild in the Country, and Charro!.

• Let Elvis accept all the praise and criticism

Colonel Parker did play a role in the situation by demanding so much money for Elvis to appear in a movie. When a studio had to pony up $1 million just to get Elvis, why in the world would they put him in a serious role when his previous dramatic films had done poorly at the box office? If Elvis and the Colonel had been willing to accept less money up front, maybe the studios might have been willing to risk placing him in more artistic pictures.

Finally, lest some begin to doubt my admiration for Elvis, let me dispel any such notion. I was an Elvis fan in his movie years, and I’m still one today. I just happen to believe that, ultimately, Elvis was responsible for both the good and poor decisions made in his personal and professional lives. Is it fair to credit him for all the great accomplishments in his career, but then blame Colonel Parker for those decisions that didn’t turn out so well? Let’s let Elvis take it all on his shoulders. Even though on one level he was a superstar among superstars, on another level he was just as human as his millions of fans. — Alan Hanson | © June 2009

"Once a deal is made, the studio takes complete control of a film, the Presley camp having no say-so on cast, script or production costs."