A Hollywood Civilian
On the Set of G.I. Blues

"The tall young man with the dark, curly hair, smoothed down his soldier’s uniform, rose from the bar stool and walked glumly below bright lights, out among the crowded night-club tables. Sulkily he acknowledged applause and cheers of his soldier buddies, slapping one on the back, tousling another’s hair, as he moved toward the bandstand by popular request.” 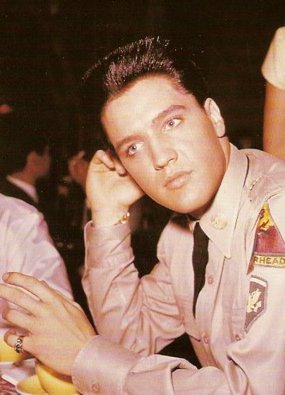 That’s how Murray Schumach opened his May 22, 1960, article about Elvis Presley in The New York Times. In the article, headlined “Hollywood Civilian: Elvis Presley Returns to Movie Maneuvers,” the writer gave the highlights of his recent visit to the set of Paramount’s G.I. Blues. After Presley finished the scene that Schumach described above, Elvis announced, “I liked that.” Director Norman Taurog reponded, “I liked it too. We’ll print that.”

While Elvis took a bar stool next to his co-star, Juliet Prowse, Schumach chatted with Taurog while the next scene was being set up. “There is no stiffness with this boy,” explained the director. “This is the most relaxed boy you could want. He reminds me of Crosby and Como. He is a good listener. When you have a good listener you have a good actor.” Producer Hal Wallis then added his tribute to Elvis. “I saw him on a TV show,” Wallis recalled. “There was an excitement in him. His whole look had it. I could see he was not just a singer. I saw something in him more than a personality.” While cameras recorded close-ups of the nightclub crowd reaction to Elvis, the star retreated to a nearby dressing room to answer a few of Schumach’s questions. Acting, Elvis told him, was more difficult than singing, but as an actor he was sticking with on-the- job training. “I’m not doing any studying,” he said. “At least not so far as reading or taking lessons goes. I’m learning from experience.”

• Elvis liked all kinds of singing — even opera

Elvis insisted that he liked singing too much to give it up for acting. In fact, he liked all kinds of singing. “The other night at The Milton Berle Show, he put on six opera singers,” Elvis effused. “I flipped my lid. They had great voices, great arrangements.”

When it came to his own music, Elvis admitted that he couldn’t read it. “I just listen to it get played a few times,” he explained. “No one can tell me how you should do this song or that one. I work strictly my own way. If the day ever comes when I listen to anyone else, I’ll get mechanical and I’m dead.” 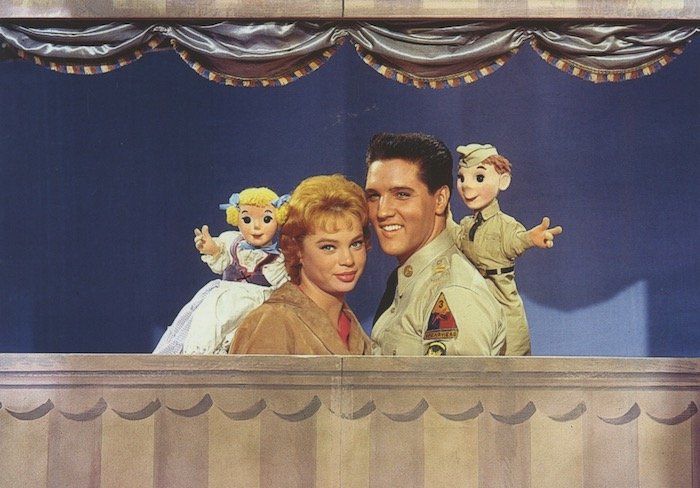 Although Elvis himself was soon to enter pop music’s mainstream with recordings like “It’s Now or Never” and “Are You Lonesome Tonight?” he defended the kind of music that made him both famous and infamous. “Rock ’n’ roll music is getting better than ever,” he insisted. “The sound engineers are learning more about how to handle the stuff. It couldn’t have been made popular by payola alone. Too many Americans love it. Nope. I don’t see why I should change my singing style right now. Seems pretty foolish to me ... Of course, if things change I’ll change too. You have to. That’s show business.” Schumach then shifted to a question about Presley’s readjustment to civilian life. Elvis, who had been discharged from the army just 10 weeks earlier, responded, “It’s good to have a car of my own instead of an Army jeep. I get up just as early as I used to because I have to make movies. There’s a little difference now. A little difference in tactics. A little difference in maneuvers.”

Elvis also commented on his adjustment to civilian life during a phone interview on the set of G.I. Blues with Hawaiian DJ Tom Moffatt. On June 21, 1960, as shooting on the set was winding down, Moffat called Colonel Parker at his Paramount office to ask about Elvis’ next appearance in Hawaii. While the two were talking, Elvis walked into the office, and the Colonel handed the phone to him. Elvis and Moffat first met when Elvis performed in Honolulu in 1957, and the DJ had conducted another phone interview with Elvis in 1959 when Presley was still stationed in Germany.

Moffat asked Elvis how things were going since his discharge. “Well, I’m just now beginning to realize that I am out, believe it or not,” said Elvis. “Because when I first came home it was a little strange for the first few weeks. I kept expectin’ somebody to come in and say, ‘Well, it’s time to go,’ y’know. ‘Fall outside here.’”

Elvis indicated he was also having trouble readjusting to the process of making movies. “It was a little strange,” he told Moffat. “I couldn’t realize where I was going or exactly what I was doing. Believe it or not, but two years [in the army] like that you become adjusted to that type of life, and you become used to it. And then all of a sudden overnight it changes again. It’s pretty hard just to go right back into things and be your old self, y’know.”

• Presley uncertain about his career in early post-army months

What about Elvis’ fans, Moffat wanted to know. Had Elvis noticed any difference in how they reacted to him compared to before he went into the army? “Well, actually, it’s a pretty hard question to answer,” Elvis admitted, “because I haven’t been out that much where I could tell. I haven’t been out to mix with people very much since I’ve been back because of the movie and television.”

Schumach’s and Moffat’s interviews on the set of G.I. Blues in 1960 revealed a tentative Elvis Presley. He was still unsure if his old fan base was still there. It was a fear that haunted him throughout his two years in the army. Although he praised rock ’n’ roll, he did so unconvincingly, admitting he might have to change his musical style. However, four straight #1 records and a hit movie in G.I. Blues must have eased his anxiety considerably. In the end, he settled for a comfortable lifestyle on movie sets and in recording studios. A decade would pass before he got “out to mix with people” again. — Alan Hanson | © 2011