Girls! Girls! Girls! was the first Elvis Presley movie I saw. In early 1963 it helped speed along my transformation into a Presley fan, a process that had begun a few months earlier. Laurel Goodwin, then, was the first of Elvis’ numerous leading ladies I saw on screen. I must admit, though, that I was not too impressed with her during that first viewing. She was, after all, an unknown actress at the time, and while attractive, neither stunningly beautiful nor particularly sexy. 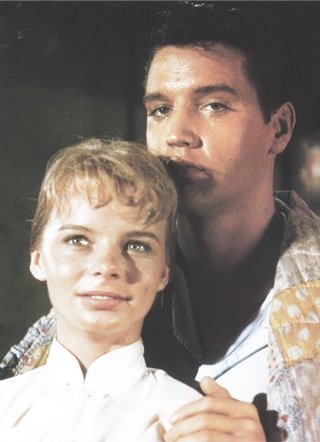 Recently, however, I decided to give Laurel Goodwin a second look. I watched Girls! Girls! Girls! again, and this time, instead of keeping a eye on Elvis, I focused on Miss Goodwin. By the end of the film, I had developed a new-found respect for her both as an actress and as a screen personality.

Noticeable from the start is the phenomenal amount of screen time Goodwin was given in Girls! Girls! Girls!, especially considering it was her film debut. Her first appearance on screen is easy to miss. As Elvis and Stella Stevens stare grimly at each other across the Pirate’s Den nightclub, Goodwin can be seen sitting quietly at a table halfway between the two veteran actors. After Elvis does a number on stage, Goodwin’s character, Laurel Dodge, begins her pursuit of Presley’s character, Ross Carpenter. She attempts to buy him a drink, and then chases him down in the street after he leaves the club.

Miss Dodge then continues to chase Elvis throughout the movie until she finally wrings a marriage proposal out of him at the film’s conclusion. To win Elvis, she out-duels Stella Stevens, who early on referred to Goodwin’s character as the “swinger with the mink look.” Along the way, Goodwin surely appears on screen more than most, if not all, of Presley’s leading ladies. In addition to the expected scenes with Elvis, she has numerous other scenes of her own. Along the way, she collects six kisses from Elvis, which could very well be another record among Elvis’ many female costars. 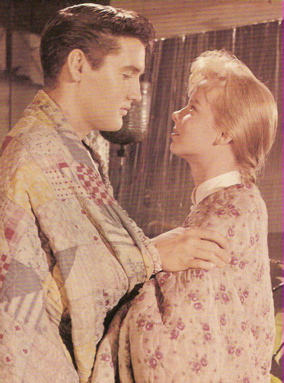 Laurel Goodwin was born August 11, 1942, in Wichita, Kansas. She was a child model and later studied acting before signing on at Paramount as a contract player. Hal Wallis spotted her and cast her in Girls! Girls! Girls! “When I learned I was going to do the role, I was a little hesitant, startled, stunned and nervous,” she explained in a Photoplay magazine article some years later.

But Elvis helped Goodwin relax during the weeks of shooting on location in Hawaii and doing interiors on the Paramount lot. “He was extremely kind,” she recalled. “Fortunately, we were involved with involved dialogue and scenes right away. He put me at ease immediately. It wasn’t like working with a phenomenon but with someone who was doing a job. It was fun because he was informal, as well. And considerate. A couple of times he’d take the brunt of something that went wrong instead of letting the blame fall on a small person.”

Off camera Goodwin described Elvis as being “big brother-ish” to her. “I had no romance with him but we became good friends,” she explained. “I learned an attitude of relaxation from him, and not to take the stardom bit too seriously. It helped me to keep my balance. I think I owe a great deal to that alone.” 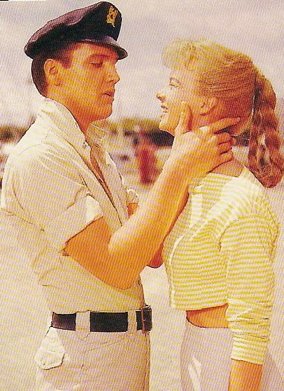 Like a big brother, Elvis was protective of Laurel Goodwin. In the Photoplay article, she explained that during filming a boyfriend started giving her a hard time. Without telling her, Elvis stopped the trouble by sending a member of his entourage to tell the boyfriend to cool it.

Goodwin learned that Presley preferred the musical part of making movies over serious scenes. “Elvis was really a shy person,” Goodwin remembered. “He would feel much more comfortable if I were behind the camera while he was singing and dancing.”

Laurel Goodwin’s most treasured memory of filming Girls! Girls! Girls! with Elvis came off camera. “We used to play touch football between scenes and would have great fun,” she explained. “Some shots were taken by the still photographer. When they were developed the next day, Elvis picked up a photo of me in which I looked dreadful—messy, sweating—and said to me, ‘Isn’t that a gorgeous leading lady?’ He definitely had a sense of humor.” 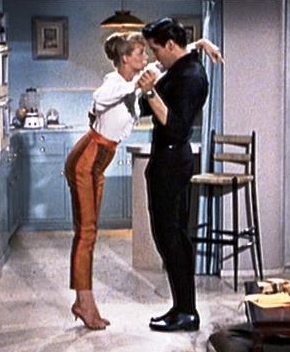 One filmed sequence in Girls! Girls! Girls! might have made a distinct impression on Laurel Goodwin, but if so, she was discreet enough not to mention it in public through the years. Elvis insider Joe Esposito describes the scene in his 1994 book, Good Rockin’ Tonight. For a complex flamenco dance scene with Goodwin (left), Elvis donned the black trousers made for the scene. According to Esposito, Elvis rarely wore underwear, and so was wearing none that day. Amid the vigorous movements the scene required, Esposito says Elvis’ pants began to rub him “the wrong way,” producing an unscripted physical response. At one point during the sequence, Presley and Goodwin embraced tightly, so it’s very likely the actress noticed what had happened.

According to Esposito, Elvis hoped that either the dark slacks or the film editing process would disguise the awkwardness of the scene. No such luck. The cause of Elvis’ embarrassment is plainly evident to those looking for it in "The Walls Have Ears" sequence in Girls! Girls! Girls! Thus Laurel Goodwin participated in what may be the most bizarre scene in all of Presley’s 31 Hollywood films.

Laurel Goodwin received positive reviews for her work in Girls! Girls! Girls!. Variety’s November 7, 1962, review panned the film but singled out Goodwin for praise. “Most striking thing about the picture is the introduction of new Paramount pactee Laurel Goodwin, who makes an auspicious film bow. Youngster has a cute, homespun potential of a Doris Day.”

Despite the “auspicious” start, Laurel Goodwin’s Hollywood career was limited to just three more films through 1969. Besides her role opposite Elvis, she is best known today for playing Yeoman J. M. Colt in The Cage, the pilot episode for the original Star Trek TV series.

Goodwin married business executive Walter Wood in 1971. They lived in New York for many years, before moving to Palm Springs, California. Over the years she attended a few Elvis conventions, and in 2005 appeared at her first Star Trek gathering.

In the Photoplay magazine article, she expressed her regret that Elvis never found the happiness in his life that she had found in hers. “I sensed a deep sadness inside him,” she concluded. “He was such a phenomenon—and he could never outgrow it.” — Alan Hanson | © August 2010

" Laurel Goodwin surely appears on screen more than most, if not all, of Presley’s leading ladies.  Along the way, she collects six kisses from Elvis, which could very well be another record among Elvis’ many female costars."