In 1957 Paramount decided to try a risky strategy when it released Loving You, Elvis Presley’s second feature film. An article in Variety on June 26, 1957, two weeks before the film’s official release date, explained Paramount’s plans for distributing the movie in the major markets of New York and Chicago. The standard strategy of the day among the major studios was to advertise heavily and then open their big budget films in one of the large downtown theaters for a two-week run. Only then were the smaller, outlying theaters allowed to offer the movie. That’s how 20th Century-Fox handled Presley’s Love Me Tender eight months before. 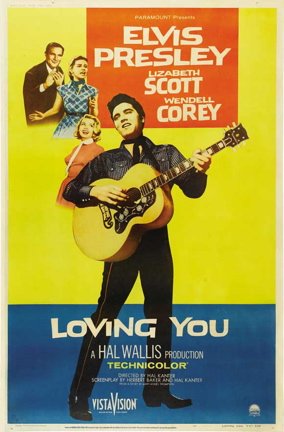 In 1957, however, the studios were just beginning to experiment with a new distribution strategy, and Loving You seemed a good fit for the new approach. Paramount noticed that Love Me Tender had opened big on Broadway in New York, but then faded quickly after the first big flood of teenagers had seen it. So, with Loving You, Paramount decided to skip the downtown showing altogether, and go with a saturation booking in 90 neighborhood theaters in the city starting on July 17, 1957. That brought the potential opening weekend seating to 145,000, instead of the 4,000 or so that a Broadway theater could offer. The mass theater release was preceded by a media advertising blitz, just like under the old system of one major theater opening.

The same strategy was used in Chicago, where 55 local theaters were allowed to play Loving You starting July 12, just three days after the movie’s official release. Timing was another reason for Paramount’s decision to open the film in so many theaters at once. Since it was mid-summer, the studio wanted to make sure the movie was available to as many teenagers as possible before schools opened in September. In a full-page ad in Variety on July 17, Paramount touted the early box office success of the new Presley film: “Elvis Presley, in his first big, modern musical, ‘Loving You,’ is singing up a storm across the nation! In Chicago, two tornadoes hit last week! The Presley twister really tore the town apart when it blew into a sensational, record-breaking 50-theatre first run! In Tennessee, Arkansas and Mississippi, it’s topping everything ever! 82 first-showing engagements start today in New York!” 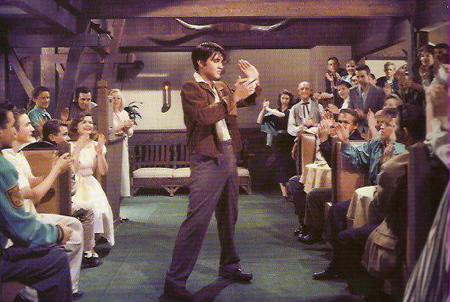 Paramount was strictly experimenting with Loving You. It had no other movies scheduled for a saturation opening, and all the studios were waiting to see results of the new distribution strategy before considering it as a standard procedure. Loving You did not disappoint. It brought in $3.7 million, making it one of the 20 top grossing films of the year. So, although he had nothing to say about how his films opened, indirectly Elvis can be credited with helping change Hollywood’s film distribution policy.

Loving You did have a premiere showing, however. That was on Tuesday, July 9, 1957, at the Strand theater in Memphis. An article in the Press-Scimitar the following day reported impressive numbers. “The first day of ‘Loving You’ broke every existing attendance record in the history of the Strand,” according to the newspaper article. “It also broke every money record except one. The first Saturday run of ‘The 10 Commandments’ brought in $200 more. Its tickets were priced at a $2 top, however, against a 90 cent top for ‘Loving You.’” During opening day, the film’s producer, Hal Wallis, called the Strand’s manager three times from Hollywood. After checking on the picture’s initial attendance figures, Wallis called back later in the day to see if box office numbers were keeping up. (They were increasing.) Finally, Wallis called again to ask the theater manager to airmail him the next day’s newspaper reviews and articles on the film. Attendance was still strong the second day at the Strand. Presley fans arrived in “unexpected numbers,” according to theater manager Lloyd Bailey. Wednesday’s customers were “just as loud as yesterday’s,” he added. “They finally finished ripping off all my billboard displays.” That included a cardboard cutout of Elvis “which gave them a little trouble at first.”

The Strand had 1,100 seats, and on opening day when the theater emptied after one showing, it only took 15 minutes for all the seats to fill again. However, the Press-Scimitar noted that, “Some dyed-in-the-wool Presley fans stayed for as many as five performances.”

I’ve tried to imagine how exciting it would have been to be among those enthusiastic young people who sat in the Strand theater that opening day. I suppose, though, that at the age of eight, those screaming girls would have scared the hell out of me. — Alan Hanson | © 2008

Go to Elvis in Hollwood

"Paramount was strictly experimenting with Loving You. All the studios were waiting to see results of the new distribution strategy before considering it as a standard procedure."