In Memphis on October 17, 1957, actress Judy Tyler made her official entry into the world of Elvis Presley. Twenty-six minutes into the premiere of Jailhouse Rock, she walked into a Los Angeles bar and sat down on a stool next to Presley. Awkward glances marked the first interaction of their characters, Peggy Van Alden and Vince Everett. Over the next hour, a strained relationship played itself out on the screen, culminating in romance in the film’s final scene. 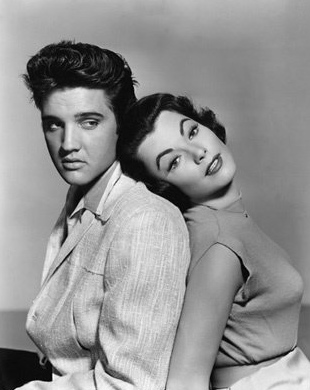 For many in the audience that night, it must have been a surreal experience watching Judy Tyler in the debut of Jailhouse Rock. They all knew that she had died over four months earlier. Even all these years later, it can be a touching experience viewing the final scene of Jailhouse Rock, knowing that just three weeks after it was filmed, the leading lady’s promising career tragically ended on a lonely Wyoming highway.

Born Judith Mae Hess on October 9, 1932, in Milwaukee, Wisconsin, Judy Tyler was raised by parents familiar with show business. Her father, a building contractor, had played the trumpet in big bands, and her mother had been a chorus girl. In her youth, Judy studied ballet, music, and acting. In 1948, at age 15, she left school to go into modeling. The following year she was named “Miss Stardust” in a nationwide contest. Soon afterwards she moved to New York City and got a job dancing in the Copacabana chorus line. There she met her vocal coach Colin Romoff, whom she later married.

After working in several New York nightclubs as a singer, Tyler got her first national exposure in 1952 when she began a three-year run as Princess Summerfall Winterspring on the Howdy Doody TV show. In 1955 she landed a roll in the Broadway production of Pipe Dream. An amicable divorce from Romoff in 1956 was followed by another marriage to TV actor Gregory LaFayette in March 1957. The couple then traveled to Hollywood for what were to be the last four months of Judy Tyler’s life.

They were eventful months for Judy. She had a substantial role in “The Case of the Fan Dancer’s Horse,” the first Perry Mason TV episode to be filmed (though not the first one broadcast). She starred in her first film, the forgettable Bop Girl Goes Calypso, and then landed a breakout part as Elvis Presley’s love interest in Jailhouse Rock. 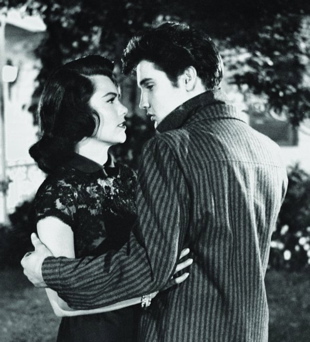 The movie was filmed at MGM’s Hollywood studios from May 13-June 14, 1957. Elvis remained front and center throughout the film, and, although Judy had second billing, her roll in the script was not a challenging one. During her contentious on-screen relationship with Presley’s character, Tyler spent much of her time revolving facial expressions between happiness, confusion, anger, and adoration. Her only memorable line came early on after Vince Everett smashed his guitar on a table in the Florida Club. When Vince asked Peggy why she was interested in him, she responded, “I like the way you swing a guitar.”

Since Tyler was dressed conservatively throughout Jailhouse Rock, she appeared considerably older than Elvis. (Actually, at 24 she was only two years older than him.) Judy had just two dramatic scenes in the film, first when Elvis’s character told her he was going to sell the recording company they started together, and the second when she told Elvis in the hospital that she loved him. Tyler handled the scenes well, but the briefness of both made them unmemorable in the context of the entire film. Judy also exhibited some athleticism in Jailhouse Rock. She twice chased Elvis down from behind on the sidewalk, wearing high heels both times.

• Did Elvis and Judy have a thing going on?

Off screen, the nature of Elvis’s relationship with his leading lady in Jailhouse Rock is in dispute. Most sources agree with Elvis’s friend George Klein that there was no romantic association between the two. “Elvis never had a romance with Judy Tyler,” says Klein. “He didn’t fool around with her during the movie because she was married. He thought she was very nice and very attractive and very professional.”

Klein was close to Elvis during filming, but so was Presley buddy Lamar Fike, who, in his 1995 book, contends, “She was a newlywed, but she and Elvis had a thing going.”

• The death of Judy Tyler

After principal photography on Jailhouse Rock ended on June 14, 1957, Judy and her husband decided to drive rather than fly to New York City, where she was due to appear on the CBS-TV program Pantomime Quiz. The couple chose to drive the mid-West route across the country through Wyoming.

In the early evening of July 3, their 1957 Chevrolet approached “Wild Bill’s Curio Store and Petting Zoo” on US Highway 30, three miles north of Rock River, Wyoming. When a car pulled out of the tourist site onto the highway, LaFayette swerved, sending the couple’s car skidding into the oncoming lane. Their car was hit broadside by an northbound vehicle. Judy was killed instantly; her husband died the next day in a Laramie hospital from chest and back injuries. Also dead at the scene was a passenger in the other car. The only survivor of the collision was the other driver.

Although Judy Tyler was not well known nationally at the time, newspapers across the country printed wire service articles on her death in the days that followed. Conflicting elements in those early accounts have left details about the accident and its aftermath unresolved to this day. Ted Smith’s assertion in the Memphis Commercial-Appeal that Judy Tyler’s body was “severed by the impact” continues to feed a belief over 50 years later that her body was cut in two. None of the other stories that appeared in the national press at the time contained that claim, including The New York Times, which cited on-scene patrolman Paul Thresher as a source.

A few contemporary reports and many on-line sources today also contend that cash, furs, and jewelry were stolen from the Tyler car after the accident. However, other accounts indicate that a Milwaukee detective returned the couple’s personal effects to their families. Gregory LaFayette’s age at the time of his death is also in question. Smith, in his Commercial Appealarticle, cited an MGM spokesman as saying “both Miss Tyler and her husband were 24.” Those ages were universally reported at the time of the accident, but current evidence indicates that LaFayette was born on January 23, 1938, which would have made him 19 years old at the time of his death.

George Klein says he’ll never forget when Elvis knocked on his door early one morning in 1957. “He said, ‘I’ve got some bad news. Judy Tyler just got killed in a car wreck.’ So we drove around Memphis, talking about, reminiscing about her. How nice she was, how professional she was, and how tragic it was that she was killed in a car accident when her first big motion picture was coming out. And he took it pretty tough.” 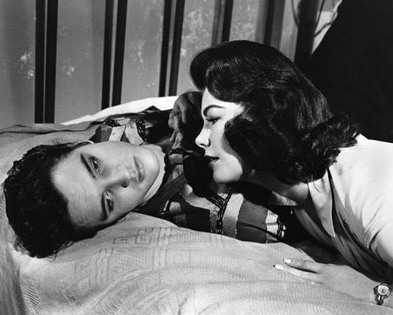 “Nothing has hurt me as bad in my life,” Elvis told reporter Smith later that day. “I remember the last night I saw them. They were leaving on a trip. Even remember what she was wearing. All of us boys really loved that girl. She meant a lot to all of us. I don’t believe I can stand to see the movie we made together now, just don’t believe I can.”

According to Lamar Fike, however, Elvis was able to put the tragedy behind him. “It really upset him. He broke down and cried … Elvis couldn’t get over it. He gave an interview to the Commercial-Appeal saying he didn’t think he could stand to ever watch the movie. And he meant it at the time. But in thirty-six hours he was over it.”

Elvis told Smith he planned on attending Tyler’s funeral in New York, even if it meant missing the Memphis premiere of his film Loving You scheduled for the following Tuesday. A few days later, however, the Presley family issued a statement saying Elvis would not attend the funeral because he didn’t want to create a disturbance.

Judy Tyler’s ashes were interred at Ferncliff Cemetery in Hartsdale, New York. Her husband was buried in his hometown of Hopewell Junction, New York.

When the film was released nationally in November 1957, reviewers were kind to Judy Tyler. Since she was dead by then, the writers apparently saw no need to analyze her work in detail, and so usually provided only passing remarks. Following are some of references to Tyler in the initial reviews of Jailhouse Rock.

“The late Judy Tyler, as a pretty record promoter who helps the crude young singer to success only to receive shameful treatment in return, gives a performance that makes her untimely death seem all the sadder. | Los Angeles Herald Express

“Although she isn’t allotted one single note here, Miss Tyler is the lovely little brunette from Broadway’s ‘Pipe Dream,’ tragically killed after making her film debut.” | The New York Times

• The lost future of Judy Tyler

While Elvis Presley fans will long remember Judy Tyler, her death at age 24 in 1957 did not raise her to iconic status in the consciousness of American culture. Unlike James Dean, she was struck down before her full promise as an actress could be realized. In a July 20, 1957, article, Variety asserted that Tyler “was advancing far ahead of herself … In ‘Pipe Dream’ her performance was described as cryptic, while in the café, Miss Tyler was described as needing direction before she could enter top ranks in this field.”

Margaret Harford, however, writing in the Los Angeles Mirror News on November 4, 1957, lamented the promising future that had been lost to the entertainment industry. “Youthful Miss Tyler’s death is a real loss,” Harford judged, “for she was a talented, fresh-looking beauty who probably would have done extremely well in the movies.” — Alan Hanson | April 2012

"Judy Tyler, as a pretty record promoter who helps the crude young singer to success, gives a performance that makes her untimely death seem all the sadder."