Friday, September 7, was a day then 18-year-old Sue Wouters of Seattle will never forget. That day, along with hundreds of others, Sue and her mother, a fair secretary, visited the movie set hoping to get a glimpse of Elvis. To her surprise, it was Presley who glimpsed the blond, blue-eyed girl in the crowd. Smiling, he winked at her and came over to introduce himself. Later, one of Elvis’ bodyguards told Sue that Presley wanted her phone number. That night the guard called Sue on Elvis’ behalf to ask for a date. With her mother’s permission, Sue accepted, and several hours later a limousine pulled up in front of her family’s home at 1736 Belmont Avenue.

The chauffer drove her to the New Washington Hotel, where she was ushered up to Elvis' room. They spent the evening in his suite with his traveling companions and their guests. “We watched television, listened to records and drank Cokes,” Sue told Stanton Patty of the P-I.“Elvis doesn’t touch liquor.” She added, “He said, ‘I would love to take you out.’ But he couldn’t because he would just get mobbed by the fans.”

The limousine again came to her house the next two nights, and she had a fourth date with Elvis on Thursday, September 13. They always met in his hotel room. Sue described Elvis as being “handsome and shy.” “He laughs all of the time,” she said, “but he does have a real temper.” Room service meals were pretty basic. “Elvis sent for hamburgers and would eat three or four of them at a time,” she explained.

Sue admitted that Elvis kissed her on each of their four dates. “There was nothing wrong about it,” she added. “He was a gentleman at all times.” Her rendezvous with Elvis cost Sue her steady boyfriend, but she thought it was worth it. “I don’t care,” she said. “Elvis was much more interesting.”

Saturday, September 8, was the fourth day of location shooting for Elvis in Seattle. Dick Moody of the Times characterized Elvis’ activities that day as follows. “Through the glazed eyes of his teen-age fans, Elvis Presley blazed a glittering path like a glowing comet across the World’s Fair grounds … It was a stardust trail of swooning girls, stepped-on feet and harried policemen … Girls laughingly assaulted the police who locked arms to keep the crowds from the singer.” 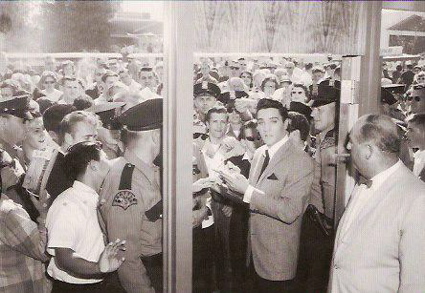 Elvis spent the day moving back and forth between set locations and his mobile dressing room near the stadium. Saturday’s filming took place at the Electric Utilities Pavilion and the Federal Science Pavilion. Once, when Elvis, riding in an electricab, passed by a crowd of on-lookers, he reached out and touched the hand of fourteen-year-old Yvonne Dohrman, who immediately dropped to the pavement. “She was old cold,” said police Sgt. Dennis Haley, who lifted the girl off the ground. “I handed her to two other policemen for first aid.” After she revived a minute later, Yvonne got up and ran off in the direction Presley had gone.

One unidentified girl scrambled past security and climbed into the electricab with Elvis. Sergeant Haley was among the officers who helped remove the girl from the vehicle. “She clasped her hand beneath her chin—and then went cross-eyed as she looked at Presley,” the officer explained.

Laura Newman, 15, of Longview, Washington, was standing nearby later in the day when Elvis came out of the Science Pavilion drinking a can of orange pop. As he neared her location, she asked, “Can I have the can when you’re through?” He answered, “Here, take it.” Holding the nearly full can, Laura whispered to no one in particular, “He drank from it.” Dick Moody of the Times reported the reverent discussion that followed.

“What are you going to do with it?” an envious girl asked.

“Drink it and save the can,” Laura replied. She carefully fitted her lips over the same spot Presley’s had touched—and quaffed deeply.

“Just a sip,” another girl begged.

“I came all the way from Longview just for this,” Laura told her.

That same day, Elvis’ co-star, Joan O’Brien, arrived in Seattle. She told a Times reporter that she had given up a sixteen-week appearance in Las Vegas to work with Elvis. That night she rode most of the Gayway rides and went to a twist party. Sunday was a day off for the film crew, and Miss O’Brien spent a good part of the day in a Seattle movie theater watching a double feature.

The actress’s first scheduled day in front of the cameras had to be put off when rain fell most of the day on Monday, September 10. The fairgrounds were dry the next morning, but producer Ted Richmond kept an eye on the cloudy sky. “I’m holding my breath at the rate of $6,000 an hour,” he said nervously. But the clouds parted, revealing some blue sky as the cameras moved to the Space Needle. 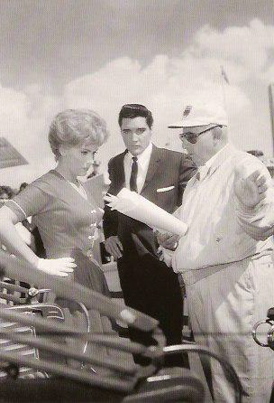 Miss O’Brien was conspicuous in a bright red dress. Hundreds of spectators packed around the Space Needle’s legs and sat on nearby walls as Presley and O’Brien played their parts near the tower’s elevators. Between scenes Miss O’Brien made it clear that she enjoyed working with her co-star. “I had not met Elvis until I arrived,” she said, “but I feel I have known him all my life. Elvis is a very warm, friendly person. He is courteous to work with and extremely conscientious.” The actress also spent some time learning to operate a bicycle-powered “pedicab” for a scene the next day in which she would pedal Elvis through the fairgrounds.

Director Norman Taurog, who had worked with Elvis on several previous films, including Blue Hawaii, didn’t seem too concerned about the crowds that surrounded each of his scene setups. “All this commotion,” he told John Voorhees of the Post-Intelligencer, “I will say it used to be much easier in the studio—it costs about $20,000 a day to film on location like this. But your Fair is particularly photogenic and I think the expense is going to be worth it. Wait till you see the Fair in CinemaScope and color.”

• Elvis in Seattle: Hotel Under Siege

At least Taurog didn’t have to deal with the commotion at the New Washington Hotel, where a legion of camera-toting teenage girls kept the building under siege from the moment school ended in the afternoon until well into the night. The distressed hotel staff was augmented by six off-duty Seattle police officers hired to protect Elvis’ fourteenth floor suite. Some aggressive fans tried to penetrate the security shield using strategies like climbing fire escapes or claiming to be Elvis’ friends. Others posed as reporters for high school newspapers, and a few even tried to convince hotel staffers that they had a date with Elvis.

Hundreds of love notes and letters for Elvis piled up at the front desk. Items dropped off there for Presley included pizzas and flowers. Dozens of girls constantly filled the lobby waiting for their idol to come down the elevator. “I’ve never seen so many tomatoes in my life,” night desk clerk Marie Hanley told a P-I reporter. “If we could only get these crazy girls out of the lobby.” She added, “I chased two down the back stairs one night. They came in the back door and got all the way to the fifth floor before they were discovered.” Any girls who tried the fire escape found a cop stationed at the top to send them back down.

The girls holding vigil for Elvis saw no need for the police presence. “All we want is his autograph,” one told the P-I’s Charles Dunsire. “You’d think we were inhuman or something,” added another. As for the police, according to Sgt. Bob Miller, in charge of security for Presley during his Seattle stay, most of the teenagers had been orderly. “Actually, they’re a nice bunch of kids,” stated Lt. Dave Jessup of fair’s police detail. “All things considered, they have been cooperative and well mannered. We’ve no quarrel with the kids we’ve dealt with so far at all.”

At the front desk, though, Miss Hanley voiced some mixed feelings about having Elvis in Seattle as a guest in the hotel. “It was nice to have him come,” she admitted. “But it will be nice to see him go.”

Tuesday, September 11, was Elvis’ seventh day in Seattle and the fifth day of filming. The first scene of the day had him and O’Brien coming down some stairs by the Food Circus and climbing into a Pedicab, which Miss O’Brien then peddled away.

In the P-I, Voorhees described the hubbub accompanying this and every other scene in which Presley appeared at the fair.

“The biggest attraction at the World’s Fair continues to be Elvis Presley, who may turn out to be the biggest boon to the sellers of camera film since the Space Needle was unveiled. Whenever the Metro-Goldwyn-Mayer crew sets up its shop to film a scene with Presley, literally thousands flock to the spot (to be held back at a respectable distance by approximately 40 off-duty Seattle policemen) and the first thing they do is get their cameras at the ready. When Elvis appears, which is always some time after a great deal of rehearsal (with stand-ins) and adjustment of equipment, the noise of cameras whirring, clicking, snapping, flashing and other assorted noises runs a close second to the helicopter [ride] and Space Needle chimes.” (To continue reading about Elvis in Seattle, click on the link below.)

Go to Elvis in Seattle: Part 3

“Through the glazed eyes of his teen-age fans, Elvis Presley blazed a glittering path like a glowing comet across the World’s Fair grounds."