On Wednesday, September 12, Elvis and the MGM crew started their second week of shooting on the World’s Fair grounds. During a mid-day break, Elvis and Colonel Parker met with Washington State Governor Albert D. Rosellini at the downtown Monorail station. Rosellini had been credited with first pitching to Hollywood executives the idea of using the Seattle fair as the scene of a major motion picture.

Elvis shook the governor’s hand, but Rosellini seemed more overwhelmed by a gift presented by Elvis and the Colonel. It was a huge smoked ham said to be a gift from Tennessee Governor Buford Ellington. “The ham must have had a rough trip from Tennessee,” noted the P-I’s Charles Dunsire, on hand to witness the ceremony. “It had a gouge on one side as though someone had taken a chaw. But it was the spirit of the gift that counted and Rosellini expressed gratitude as he took it from the singer, though he looked a bit bewildered.” 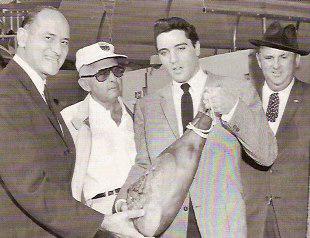 After the ham presentation, Elvis and the governor stepped over to the roped off sidewalk to sign autographs. Rosellini soon backed off, leaving Elvis to cope with the screaming fans, which Dunsire noted, “were too young to vote anyway.”

Asked what happened to the ham, the governor said he had sent it back to the state capital of Olympia. Later the ham was found in the possession of State Patrol Capt. D. D. Daniels, who wasn’t sure what he was supposed to do with it. “It would look awfully good in my refrigerator,” he said.

Before the reporters could get away, Colonel Parker said he had an exclusive for them. He announced that Elvis had just signed a new recording contract with RCA to run through 1971 for $3 million. Parker expressed confidence that Presley would be just as popular then as he was now. “If he isn’t,” added Parker, “we’ll quit with the belt on, just like Jack Dempsey.”

The MGM crew got their filming done that day, but the next morning, Thursday, September 13, began with ominous clouds blanketing the Seattle skies. Jack Jarvis found Colonel Parker organizing stacks of Elvis photos outside the National Administration exhibit, the scene of that day’s filming. “We’ve given out more than 12,000 photos of Elvis since last Saturday,” the Colonel announced, adding, “For the younger fans, they’re free. But for you Jarvis the charge will be a dollar. Get out your cash and don’t block the line.”

Without being asked, Parker brought up the earlier assurance he had given Jarvis. “Don’t think I’ve forgotten the two slices of ham I promised you,” said the Colonel. “Right at this moment someone is carrying those two slices of ham around in a paper sack with your name on it. All I have to do is find that person who has the sack. And speaking of hams, I’m embarrassed. I can’t figure out how the governor got the small ham.”

It turned out that actually two hams had been sent in from Tennessee. The second, much larger one, wound up in the hands of Joe Gandy, the World’s Fair president. Jarvis had seen the monstrous ham at the fair’s private Century 21 Club. Gandy had the ham brought out from the kitchen by a cook’s helper, who “staggered under the weight of it.”

“This is terrible,” Parker responded, after Jarvis told him he had seen the larger ham. “Governor Ellington is a Democrat and so is Governor Rosellini. I wonder what Republican took a bite out of the governor’s ham?”

The conversation suddenly ended as rain began to fall. Parker scooped up his photographs and headed for shelter. Elvis hadn’t arrived on the set by then, and neither had Joan O’Brien, who was rumored to have a migraine headache. With planned shooting delayed, director Taurog had the World’s Fair band walk through the picture’s closing scene several times. The band marched west from the NASA exhibit, winding through poles that supported hanging baskets of flowers.

Elvis finished up his portion of location filming at the Fair on Friday, September 14. Another large crowd was on hand to get a final glimpse of Elvis in Seattle before he left town. The concentration of spectators finally sent one of them to the hospital. About 3:30 in the afternoon, Mrs. Ellen Yorg, 76, of Van Nuys, California, was taken to Seattle’s Providence Hospital after suffering a possible foot fracture when a three-wheel motor scooter backed over her foot.

Elvis finished his day’s work before the cameras, and early the next morning, after spending 10 days in Seattle, he and his entourage were back on the road driving south toward Los Angeles. Filming resumed a week later at MGM’s Hollywood studios on September 17. In fact, a number of scenes in It Happened At the World’s Fair that appeared to show Elvis in Seattle were actually shot in mockups on the MGM lot.

• Elvis in Seattle Back in Hollywood

For anyone who attended the World’s Fair in 1962, some of those scenes are easy to spot. For instance, the Monorail zipped back and forth between downtown Seattle and the fairgrounds in just 60 seconds each way. In one scene in It Happened At The World’s Fair, however, the Monorail run is stretched out to over two and a half minutes to allow time for Elvis’ song “They Remind Me Too Much of You” to play through. The view of the receding fair at night from the rear window of the Monorail had obviously been filmed in Seattle and then inserted at less than half-speed behind Elvis and Vicky Tiu as they sat in a studio Monorail car mockup in Hollywood.

Another odd scene occurs when Elvis and Joan O’Brien share a table in the Space Needle’s rotating restaurant. The scene obviously was not shot in the actual “Eye of the Needle” but rather in Hollywood. Producer Ted Richmond must have thought that the audience’s eyes would be so focused on Elvis singing “I’m Falling In Love Tonight” to O’Brien that they wouldn’t notice the background. There the restaurant’s windows can clearly be seen rotating, while the outside scenery remains unchanged. In the actual Space Needle restaurant, however, the effect would have been exactly the opposite. Since the entire restaurant rotated, the outside view, and not the windows, would have moved around the diners. 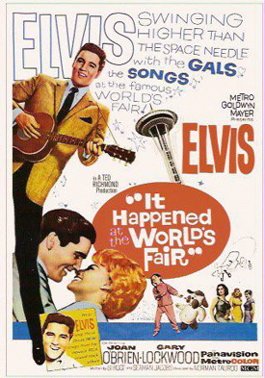 Elvis finished up his work on It Happened At the World’s Fair on November 9, 1962, and headed to Las Vegas for some vacation time. The film premiered in Los Angeles on April 3, 1963, and opened nationwide a week later. Since the Seattle fair had closed six months earlier in October 1962, the movie lost much of the punch its setting might have had at the box office. Unfortunately, MGM’s schedule dictated production in September 1962, shortly before the fair closed. If filming could have been done during the previous April, when the fair opened, the picture possibly could have been released before the fair closed, thus capitalizing on the excitement generated by the Seattle World’s Fair throughout its run. For a Presley feature at the time, the film did only average business at the box office, even in Seattle. It came in at #55 on Variety’s list of “Big Rental Pictures of 1963” with a gross of $2.25 million.

The memory of Elvis in Seattle at the World's Fair has lingered for decades in the hearts of his fans who saw him there. On August 17, 1977, about 200 Elvis fans gathered at a hotel in Longview, Washington, for what was to be a week-long “Tribute to Elvis” engagement by entertainer Johnny Rusk. Instead, the gathering turned into a memorial for Elvis, who had died the day before. Among the mourners was Laura Lefebvre, who 15 years earlier as Laura Newman, had been the teenager who spoke to Elvis in Seattle when Elvis walked past her after leaving the Science Pavilion. “At the fair, I got right next to him,” she recalled, “and asked him if I could have his can of pop when he was done. He handed it to me. I still have it. My husband hides the can just to make me mad, but then I threaten to burn his Tammy Wynette record.” Besides the empty can, Laura also treasured the ticket stubs from four Elvis concerts she had seen in the intervening years. — Alan Hanson | © November 2008

Reader Comment: I very much enjoyed your blog about the filming of It Happened at the World's Fair, but my husband and I disagree with your description of the Space Needle restaurant. The floor with the dining tables rotates, but the windows and center of the room are stationary—so the window DO in fact appear to be rotating around the diners. The same scenery backs up and repeats during the 2-minute daytime conversation, so there must have been several takes, because a complete rotation takes almost an hour. Wikipedia says the dinner scenes were shot in the real Space Needle, and we agree, after studying them closely (we have eaten there many times). Thanks for the very fun and interesting blog, which I looked up after rewatching the movie last night. — Valerie (July 2016)

"Elvis finished his day’s work before the cameras, and early the next morning, after spending 10 days in Seattle, he and his entourage were back on the road driving south toward Los Angeles."