LAS VEGAS—Elvis Presley’s opening here Monday at the New Frontier had some explosive repercussions in the local press, when the rock and roll artist stood up United Press’ syndicated Hollywood columnist, Aline Mosby, on an interview.

That was the lead in a meager three-paragraph story tucked inside the pages of Billboard magazine’s May 5, 1956, issue. Amid the swirling controversies of all sorts that surrounded Elvis Presley at that time, his not showing up for an interview may have seemed like a minor infraction to the general public. However, to members of the entertainment press corps, it was an “explosive” story not because of what Elvis did, but because of to whom he did it. He had stood up Aline Mosby! 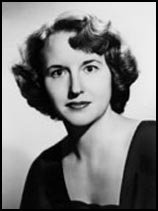 The Billboard article explained briefly why Elvis dusted off Mosby (right) and how the columnist reacted. “According to local scribes, Presley had arranged to meet Miss Mosby after the opening but instead passed her up to ‘see a Randolph Scott western movie.’ The fem columnist, who had flown here from Hollywood for the story, reportedly ‘screamed’ out of Las Vegas ‘with blood in her eyes.’”

When Elvis choose Randolph Scott over Aline Mosby, he may not have been aware of her lofty reputation in the entertainment press. When she angrily stormed out of Las Vegas, the city’s writers foresaw “explosive repercussions” for Elvis in the form venomous reporting from a respected woman scorned. However, Aline Mosby had not won her lofty position in a man’s world by letting her emotions color her judgment.

Born in Missoula, Montana, on July 22, 1922, Aline Mosby earned a degree in journalism from the University of Montana in 1943. She started her career at Time magazine before taking a position with United Press International (UPI) in Seattle. In 1946 she transferred to the wire service’s Los Angeles office, where she began reporting on the Hollywood film industry. In 1952 she broke the story that the girl who had posed for a popular nude calendar was, in fact, Marilyn Monroe, one of Hollywood’s hottest young properties at the time. (Monroe later thanked Mosby for giving her movie career a boost.) Later, Mosby’s candid articles about celebrities appeared in Collier’s magazine. It was during this period in her career that Presley jilted Mosby in Las Vegas.

Apparently both the reporter and the entertainer were able to put the unfortunate incident behind them. On at least two occasions, Mosby was later able to interview Presley, with her resulting articles going out on the United Press wire to newspapers across the country.

Just a month after he ditched her in Las Vegas, Elvis met with Mosby while he was in Los Angeles for a show in the Shrine Auditorium on June 8. Her United Press article about the interview ran in newspapers the following week.

She started by addressing the sexual controversy that had exploded around Presley following his appearance on The Milton Berle Show on June 5. "Is Elvis Presley a 'sexy' singer?" she asked her readers. "A psychiatrist thinks the new rock 'n roll sensation is so sensual that bobby-soxers feel the same way, but Elvis insists he's 'just a wiggler.'"

Although Mosby never claimed to have seen Presley's show, she went on to describe and analyze his stage antics.

"He rotates his hips and bounces around the stage, a behavior that earned him the nickname of 'Pelvis Presley.' It also causes bobby-soxers to bounce out of their theater seats in a screaming frenzy. One psychiatrist I queried on the subject decided his movements 'have sexual overtones and can prompt a group of listeners to imitate him.'"

Mosby asked Elvis, whom she described as a "sleepy-looking boy of 21," to respond to the psychiatrist's analysis. "That's a silly statement," he said. "I don't try to be sexy. I don't do any vulgar movements. I just do a lot of wigglin' and  quiverin'—but I never do a bump and grind. I can't stand still when I sing, so the kids can't sit still."

Switching to Presley's private life, Mosby noted, with some exaggeration, that, "He dates various girls every night." When she asked him about the black sapphire-and-diamond ring he was wearing, he said it was a gift from starlet Judy Spreckles. "She's like a sister to me," he added. "She gave me the ring because I admired it. She's a lot older than me. She helped me a lot and we're friends. I have no plans for marriage now. I want to work a while."

During the interview, Elvis seemed "restless" to Mosby. "He sat there brooding … his bright sport shirt unbuttoned almost to his waist. He toyed nervously with some matches."

Mosby concluded her interview by asking Presley about his upcoming Hollywood movie role. "I'm not going to sing in the picture," he told her. "Singers come and go—they die out I want to be a dramatic actor."

• Aline Mosby next met Elvis on the MGM lot in '57

A year later, as work on Elvis’s movie, “Jailhouse Rock,” was finishing up in Hollywood, the two sat down in Presley’s dressing room for another interview. Mosby filed the following UPI article on June 19, 1957. In it she eased the worst fears of Presley fans by revealing that he didn’t really receive a haircut for the movie, as had been widely reported.

"MGM figured on giving Elvis a crewcut and shaving off those side-whiskers because he plays a convict in 'Jailhouse Rock,' the third movie on the agenda of the Presley steamroller through Hollywood. But this news caused the biggest crisis in the movie business since Lassie was exposed as a he. Four thousand post cards and letters from Presley fans poured into MGM, begging that the studio let their hero act with his original hair hanging around his sensual-looking face."

Describing the news as the "biggest crisis in the movie business since Lassie was exposed as a he," Mosby citied a few of the four thousand post cards MGM received from fans begging the studio not to cut Elvis's hair. "So now the studio has decided I'll wear, a crew-but wig," Presley told the writer over lunch. "Otherwise my hair will look the same, except it was reddened because in black-and-white it photographed like a cap instead of hair."

Elvis continued to talk about his hair while consuming his usual lunch of mashed potatoes, bacon, sliced tomatoes, and Coca-Cola. Also in the dressing room were Presley's retinue of "cousins and friends from Tennessee." Elvis explained why he kept his hair long.

“I never did want my hair cut. I wear long hair and sideburns because some people look better with long hair. I do because my face is long. The fans like it long, I guess, because they first saw me that way. And I certainly don’t want to do anything they wouldn’t like. Because they put me where I am, and if you don’t please a fan I’ll be back drivin’ a truck. They’re the people who buy my records and tickets.”

Mosby included her 1957 article about Elvis by revealing that he would receive $250,000 and 50 per cent of the profits for his work on "Jailhouse Rock." She called it "one of the best deals any star has ever made in Hollywood."

In later years, Aline Mosby built a distinguished career in journalism. Soon after her 1957 interview with Elvis, she moved to UPI's London bureau. In 1959 she became the first woman U.S. correspondent in Moscow. While there she interviewed Lee Harvey Oswald, a year before he assassinated President Kennedy. During her forty-year career with UPI, Mosby worked in the wire service’s Paris, New York, and Vienna offices. In 1979 she opened UPI’s first bureau in Beijing, China. Mosby, who retired from UPI in 1984, died in August 1998 at the age of 76.

Aline Mosby was among the most respected woman journalists of her era. Both she and Elvis Presley were destined for greater things in their careers when their paths crossed in the mid-fifties. — Alan Hanson (© August 2011; Revised March 2016)

"To members of the entertainment press corps, it was an 'explosive' story not because of what Elvis did, but because of to whom he did it. He had stood up Aline Mosby!"