What if Elvis Presley
Had Married Ann-Margret?

“If Elvis had ended up with Thumper, this whole story might have wound up differently.” — Marty Lacker

I am first and foremost an Elvis fan. With an academic background in history, though, over the past half dozen years, I’ve tried to view Elvis’s life and career with objectivity, as well. The primary task of a historian is to determine and reflect on what happened, not on what might have happened. Certainly, Presley’s both spectacular and tragic life is full of what ifs, but I’ve tried to avoid crystal balls, tea leaves, and conspiracy theories as source materials for uncovering Elvis’ life story. 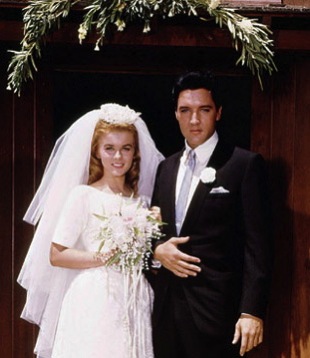 For once, though, I’ve decided to set aside my historical focus on what happened in Elvis’ life and address Presley insider Marty Lacker’s supposition that Elvis’ life may have had a happier ending had he married Ann-Margret instead of Priscilla.

Fortunately, both women have provided grist for our guesswork by addressing their relationships with Elvis in their autobiographies, Priscilla’s Elvis and Me in 1985 and Ann-Margret’s Ann-Margret: My Story in 1994. Unfortunately, Elvis left no personal memoirs, but many of those closest to him, including Lamar Fike, Marty Lacker, Joe Esposito, Billy Smith, George Klein, Red West, Sonny West, and Jerry Schilling, have published their perspectives on how Elvis felt about the two love interests in his life.

Some in Elvis’ entourage believe choosing which one to marry was a difficult decision for him. “I’ve always said it was a toss-up between Priscilla and Ann,” said Presley cousin Billy Smith. Marty Lacker weighed in, “I knew Elvis had to make a decision between them. And I thought if push came to shove, he would choose Ann.” And, according to George Klein, “While everyone knew he was absolutely smitten with Priscilla and sincerely wanted to build a life around her, it was also obvious that he was honestly overwhelmed by the feelings he had for Ann-Margret.”

If it really was a difficult decision for Elvis, it was made easier by the stark contrast between the choices. Priscilla was only 14, a child really, when Elvis, then 24, met her in Germany in 1959. In addition to her appearance and personality, by all accounts, including Priscilla’s, he was attracted by her innocence, which presented him the opportunity to mold her into the ideal marriage partner someday. When she moved into Graceland in 1963, Elvis began controlling every aspect of her life, including her appearance and relationships with others inside and outside his inner circle.

• Elvis … a woman has her place

“Only later did I realize how important it was to Elvis to always appear in control in front of me,” Priscilla noted. “Whenever I stated my own opinions too strongly, especially if they differed from his, he’d remind me that his was the stronger sex, and as a woman, I had my place.” Elvis even discouraged Priscilla from continuing her education after high school. “He figured I didn’t need it and I agreed … He wanted me to be his totally, free to go to him in an instant if he needed me.” 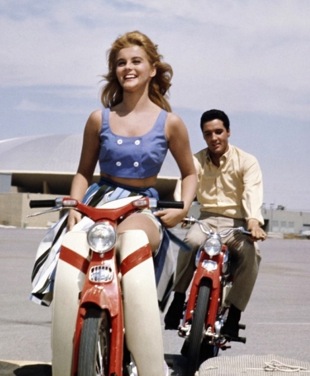 Of course, Priscilla finally broke free from Elvis’ stifling control. She went on to be an accomplished actress and a successful businesswoman who preserved Graceland and Elvis’ commercial legacy following his death. Their divorce, however, meant that she was not there to interrupt his slide into drug abuse, bizarre behavior, and premature death.

The question, then, is … If Elvis had married Ann-Margret instead, would the marriage have lasted, and, if so, could she have inspired him to lead a happier, longer life?

First, it should be noted that at age 22 when she met Elvis in 1963, Ann-Margret was a completely different kind of woman from Priscilla. Although still a young woman, she exuded self-confidence and worldliness. Bye Bye Birdie had made her a high profile Hollywood star. Elvis could not have hoped to mold her into his conception of the ideal woman, as he tried to do with Priscilla. He had to accept her as he found her, and he certainly was willing to do so in the beginning.

• Elvis and Ann-Margret … “how eerily similar we were”

In addition to sharing the same profession, Elvis and Ann-Margret were also well matched on a personal level. “The more time Elvis and I spent together, the more we learned how eerily similar we were,” she explained. “Some things were obvious, such as a love of motorcycles, music, and performing. We’d both also experienced meteoric rises in show business; we liked our privacy; we loved our families; we had a strong belief in God.” As they spent more time alone together, they grew closer and closer, according to Ann-Margret:

“We were indeed soul mates, shy on the outside, but unbridled within. We both lived on the edge and we both were self-destructive in our own ways … In many ways, both of us, despite fame and whatever else we’d achieved so quickly, had remained very childlike, and emotionally dependent. We wanted to find that same nonjudgmental, unqualified love that our parents gave us.” 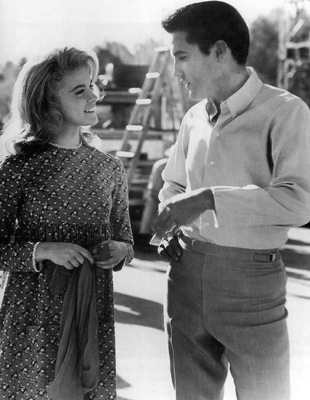 While Ann-Margret didn’t see show business as a concern in their private lives (“In terms of our careers, there was no conflict, only respect”), some of Elvis’ buddies saw it as a fatal obstacle in their relationship. Lamar Fike saw it this way:

“I think Elvis would have married her in a New York second. But he made it clear he’d do it only if Ann quit the business. Elvis believed in the old Southern idea of the wife stays home and cooks dinner and has it on the table when the husband gets home. And Ann was very career-oriented. She wouldn’t do it. She’d worked all her life to get where she was, and she wasn’t going to let anybody stand in her way.”

• Their love affair had to end

Although they dated off an on for a year after filming Viva Las Vegas, Ann-Margret indicated they knew early on that their love affair had to end. “His wish was that we could stay together,” she explained. “But of course we both knew that was impossible … Elvis and I knew he had commitments, promises to keep, and he vowed to keep his word.”

They talked about marriage, she confirms, trying to convince each other that it could work. “We were so alike, so compatible. Elvis didn’t like strong, aggressive women and I posed no threat there. He, on the other hand, was strong, gentle, exciting, and protective. Just the qualities I liked.” But it was just wishful thinking. “We were never engaged,” Ann-Margret declared with finality. In May 1967 Elvis married Priscilla and Ann-Margret married Roger Smith.

In her autobiography, Ann-Margret recalls Elvis twice reaffirming his feelings for her even after they both were married to others. In July 1967, just two months after their respective weddings, Elvis attended a performance of Ann-Margret’s stage show at the Riviera in Las Vegas. When they met alone backstage after the show, Elvis’ face turned serious. “Elvis then stepped forward and dropped to one knee,” she recalled. “He took my hands in his … in a soft, gentle voice weighted by seriousness, he told me exactly how he still felt about me, which I intuitively knew, but was very touched to hear.” 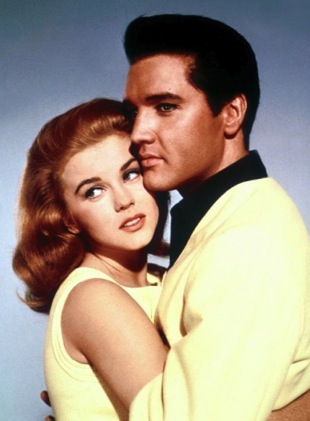 Five years later, in December 1972, Elvis visited Ann-Margret during a gathering in her suite in the Las Vegas Hilton. Later that night the phone rang in her bedroom. “Elvis told me how great it had been seeing me earlier,” she revealed. “Saying he was lonely, he asked if he could see me. It was a question I’d anticipated since afternoon but hoped that he wouldn’t really ask.” She answered, “You know I can’t.” Elvis responded, “I know, but I just want you to know that I still feel the same.”

• Could Ann-Margret have saved Elvis!

It’s obvious that Elvis and Ann-Market shared a relationship of deep affection, trust, and respect that lasted until Elvis’ death in 1977. But to return to the question at hand, if they had married, could it have lasted? And could she have saved Elvis? I think not on the first question, which makes the second question a hallow one.

In spite of Ann-Margret’s assertion that it was not an obstacle in their relationship, her show business career would surely have been a divisive issue in a marriage with Elvis. Marty Lacker knew how difficult it would be for Elvis to watch his wife’s movies. “He didn’t want to look up on a movie screen and see her in bed, kissing somebody. He couldn’t have handled it.”

Presley friend George Klein told a story in his book that supports Lacker’s conclusion. When Elvis was in Hollywood filming Girl Happy in 1964, actor Steve McQueen expressed a desire to meet Elvis. Klein and the other guys were astonished when the usually courteous Elvis rudely refused to meet McQueen. They finally realized that Elvis’ attitude toward McQueen had to do with his sexy on screen role opposite Ann-Margret in The Cincinnati Kid.“ I’m sure Elvis wasn’t thrilled about the fact that a girlfriend of his was spending her days in lingerie, jumping into bed with Steve McQueen, even if it was just for the cameras.” If Elvis couldn’t accept Ann-Margret’s movie romances when she was his girlfriend, he certainly would have been driven crazy by them if she were his wife.

• Womanizing would have ended their marriage

What would have destroyed an Elvis-Ann-Margret marriage the fastest, however, would have been Elvis’ persistent womanizing. “Elvis never stopped seeing other women,” according to Marty Lacker. “Even when he was dating Ann-Margret. I think he thought he had to do it, like it was expected of him.”

In marriage, their respective show business obligations would have kept Elvis and Ann-Margret away from each other for considerable periods of time. Elvis’ record of philandering, both in and out of marriage, makes it almost certain he would have been unfaithful to anyone he married. Ann-Margret may have accepted it as Elvis’ girlfriend, but it’s hard to imagine she would have put up with it as his wife.

Since it’s unlikely, then, that a marriage between Elvis and Ann-Margret could have survived, she, like Priscilla, would not have been around to help guide Elvis to a happier, more fulfilling life. In the end, Ann-Margret was fated to stand on the sidelines, along with all the rest of us, and watch as a person she loved slowly self-destructed. — Alan Hanson | © January 2014

Comment: A wonderful story. I have no doubt that Elvis was in love with Ann Margret. The chemistry between them on Viva Las Vegas was uncontainable. Even today it is plain to see from the many photographs of the two of them that exist, that they just sizzled in ‘64 and the years after to ‘67.

So sad that life conspired to keep them apart. Did Elvis commit to Priscilla at too young an age? We can all look back over our lives and ponder such questions. Had they married, would it have lasted?

I’ve always wondered about the scheduling of Elvis’ wedding to Priscilla exactly 1 week before Ann Margret’s to Roger Smith in Las Vegas in 1967. Her date would have been set before Elvis’s. Was he making some kind of statement here?..

‘If you knew just how I really feel

There are so many times

When people have to love and then forget

I have to force myself

Ann Margret’s marriage to Roger Smith has lasted — a wonderful testament and love story for them both. — Tim (March 2022)

“Elvis then stepped forward and dropped to one knee. He took my hands in his … in a soft, gentle voice weighted by seriousness, he told me exactly how he still felt about me, which I intuitively knew, but was very touched to hear.”