In 1956 Vernon and Gladys
Talked About Raising Young Elvis

Young Elvis Presley had become a phenomenon, and in the fall of 1956, the New York Daily Mirror decided it was time to give him a serious look. And so in early September, columnist Sidney Fields headed down to Memphis to gather material for a series of articles in the Mirror. He didn’t get a chance to talk with Elvis, who was in Hollywood shooting Love Me Tender at the time, but Fields was able to get an extensive interview with Elvis’s parents, who invited him into the Presley home. That interview with Gladys and Vernon Presley was the basis for a five-part expose entitled “The Real Story of Elvis Presley,” which ran in the Daily Mirror from September 23-27, 1956. What follows is a brief summary of the series’ first three parts, in which the Presleys revealed much about how they raised their son.

Sidney Fields had gone to Memphis hoping to discover “WHAT is Elvis Presley?” Visiting his parents seemed like a logical first step in looking for the answer. On first meeting Vernon and Gladys Presley, he was impressed with their closeness and honesty. “They do have a deep bond between them,” he observed, “which is nice to watch, and they express it in a quiet kindness.” He described Gladys as “39, plump, placid, and pious” and Vernon as “40, a gentle, graying, handsome man, as tall as his son.”

Mrs. Presley showed Fields their son’s room, the predominant feature of which was stuffed animals—teddy bears, pandas, elephants, monkeys, dogs—everywhere. “I took him to carnivals when he was a kid,” explained Vernon, “and taught him how to pitch baseballs at wooden bottles and win stuffed animals. He still does it. Last week he won a toy dump truck. It’s in the living room.”

They sat down to talk in the living room, which Fields described as “mixed modern and traditional with a touch of gaudiness.” Gladys pointed out that “Elvis picked out everything with me to furnish the house, and he’s always sending new things home. He sent so many lamps home I had to store most of them away.”

Whether their son was in Hollywood or on the road, he always keeps in touch with them, said Mrs. Presley. “He phones us every other night, no matter where he is. ‘How’s my babies?’ he asks us. We’ve always been very close. Why, to this day he gets frightened when his father dives into the pool for fear he won’t come up. He was always that way about us.”

Gladys recalled another incident that demonstrated young Elvis’s concern for his father. When Elvis was 5, his father and some other men were helping a neighbor put out a fire inside his house. Elvis screamed when he saw his father and the other men run inside the house to save some of the family’s belongings. “He was afraid his father wouldn’t ever come out,” said Gladys. “I just told him, ‘Daddy will be all right, now. You stop that, hear!’ And he did.”

Fields asked about their own upbringing and how that shaped their goals for their only son. Gladys, one of eight children, explained, “We didn’t get to go to school. Vernon didn’t graduate either. We can only read and write enough to get by. That’s why I always wanted my son to have an education.”

“We were poor,” Vernon added. “When I was sick my wife walked to work many times because she had no carfare. And many times we hardly had any lunch money to give Elvis. But we did eat and had clothes and a roof over our heads. Maybe we got them all on credit, but we had them. We never had much until three years ago, but Elvis never wanted for anything even when we were troubled. And we always taught him right from wrong as far as we knew, though we didn’t have hardly any education.”

Mrs. Presley was pleased with how they taught their son. “He was raised well,” she said. “He never lies. He doesn’t swear. I never heard him call anyone anything except ‘Mister’ and ‘Sir.’ And we taught him if he can’t help a man out of a ditch the least he can do is say a prayer for him, and the Lord will never let him fall.”

• Young Elvis was disciplined when needed

His mother spanked the young Elvis when needed, and his father remembers hitting his son just once. “He was 5 then,” Gladys explained. “He took two empty Coke bottles from a neighbor’s porch. He told me the neighbor let him take ’em, but that was stealin’ and he had to be corrected. I got Vernon to take the switch to him and give him one or two licks.” Vernon added with a wince, “It hurt me more’n it did him.”

His parents recalled that when Elvis started at L.C. Humes High School at age 13, he didn’t go in the first day because he was so scared. He was afraid the other kids would laugh at him. He had a desperate need to be liked. “And when he isn’t, he worries about it,” said his father.

The Presleys admitted they were always protective of their only son. As an example, Vernon explained how they tried to stop Elvis from playing football after he fell in love with the game at age 15. “After school the white boys would team up against the colored boys,” he recalled. “They’d come home with their clothes torn and their hides, too. Elvis being all we had, we didn’t want him to get hurt. But he wouldn’t stop. Gladys was workin’ in the hospital then and one day a boy was brought in from a football game, and he died of a blood clot. That scared both of us and we made Elvis quit.” Mrs. Presley added, “Know what he told me? He said: ‘I’ll stop because I don’t want to worry you.’”

• All of young Elvis’s girls were nice

Of course, Elvis had discovered girls about that time too. In fact, the first time young Elvis could remember really being out of his mother’s sight was when he started dating at age 16. “He didn’t have real dates till then,” said his father, “but he had girl friends since he was 11. Once, when he was 16, I seen him sittin’ real close to a little girl and I spoke to him about what he should know. He listened. He always does. We’ve been lucky. All the girls he’s known have been nice kids.”

Fields asked how they felt about the charges that Elvis’s obscene stage movements were debasing the morals of America’s youth. “Those things hurt,” admitted Mrs. Presley. “He’s never sassed us, and he’s never been uppity. Big people are still the same as little people to him, and he’s considerate of both the same way. We’re country folk. He’s a country boy, and always will be. How can any boy brought up like mine be indecent or vulgar? Especially when he’s so good to us and his friends. Why, he always wants to do what’s right.”

Elvis’s father denied other rumors that his son drinks and takes dope. “He never touch a drop of liquor in his life, and he wouldn’t know dope if he saw it.”

“He’s a sympathetic boy, and tender-hearted,” Vernon continued. “It hurts him when someone thinks bad of him. Maybe this will tell you what he’s like. He was usherin’ at the movies this time, and on his night off he was downtown with his friends and he sees this Salvation Army lady takin’ up the Christmas collection. But the box was empty. Elvis put his last $5 bill in it, and started drummin’ up a noise to get that box filled. It was filled.”

• To parents, young Elvis’s temper was his only fault

Does Elvis have any faults his parents can see? A bit of a temper, said his mother. “To be plain with you, he’s the easiest goin’ guy you ever saw until he gets pushed or shoved. Then he gets mad, and he’s a little too high tempered. But lots of people are.”

The family always talked things out. “We’ve always been able to calm him, to talk to him about everything,” said Vernon. “Except maybe his dates, and then we could talk to him if they were the wrong girls and he’d listen. He’ll say something about a car he’d like to buy and I’ll say, I wouldn’t son, and he’ll listen. Even now he obeys.”

And the Presleys see nothing wrong with their son’s “twitching and twisting” on stage. “Even when he was a tiny kid and we sang at church and camp meetin’s, Elvis moved around and acted out his songs,” Mrs. Presley said. “He’s always had a lot of energy and he’s big now and gets rid of it in his music. When he sings he’s bein’ himself and that’s not bad or wrong.”

Vernon recalled more about young Elvis’s singing. “At 9 he was picked to sing alone in church,” he said. “At home we sang as a trio, when Gladys wasn’t playin’ the harmonica. Elvis always had a natural talent. He can’t read a note even now. But you don’t have to teach a fish to swim.”

• Young Elvis: “I can sing better than that”

And Gladys remembered a time when she took her son to the fair in Tupelo. After listening to a guitarist sing a song, Elvis told his mother, “I can sing better than that.” According to Vernon, “he just walked right up on that platform, his legs shakin’ a little, and sang that song without any accompaniment.” “With a real powerful voice,” added Gladys, “and he did sing it better than that guitarist.”

The Presleys recollect that from early on young Elvis dreamed of what he would do for his parents someday. “When he was hardly four,” his mother recalled, “he’d tell me: ‘Don’t worry, baby. When I’m grown up I’ll buy you a big home and two cars. One for you and Daddy and one for me.’ All his life he’d say out loud what he was going to do for us, and he’d say it in front of other people. And you know, I believed him.”

While in high school, Elvis took jobs in the afternoon to help his parents make ends meet. “And even when he was in school he’d go around and pay the grocery bill, $25, $30,” said Mrs. Presley. “We didn’t ask him to. He’d just do it himself.” Once Elvis got his father to buy him a lawn mower and used it to make himself $8 a week. “But he stopped when the girls watched him,” remembered Vernon.

Even with their son about to turn 22, the Presleys expected their close family ties would last forever. “This is Elvis’s home,” declared his father. “He’s never had no other home except with us.”

“And even when he gets married,” said his mother, “part of him will always be here.”

When Sidney Fields left Memphis and returned to the big city up north, he took with him a good feeling about Elvis Presley’s parents. “I like these people,” he wrote in one of his Daily Mirror articles a few weeks later. “They’re simple, neighborly, unaffected by the fame and fortune of their son, or the furor he has created.” — Alan Hanson | © January 2009 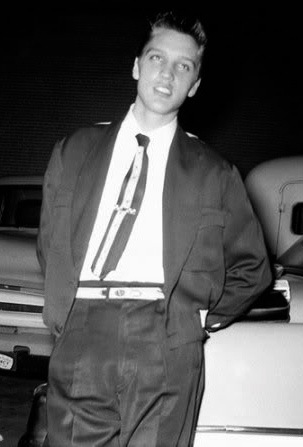 "Once, when he was 16, I seen him sittin’ real close to a little girl and I spoke to him about what he should know. He listened. He always does." 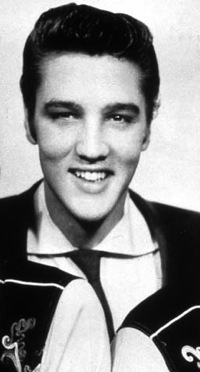