"She was always my best girl,"
Elvis Sobbed at His Mother's Funeral

When Elvis Presley rose to popularity in the late 1950s, there was no Internet, no TV news networks, no email, no social media. The dispensing of news and commentary throughout the country was firmly in the hands of one medium—newspapers. Although the three existing television networks—NBC, CBS, and ABC—had news divisions, they had minimal impact compared to the country’s vast network of newspaper syndicates. 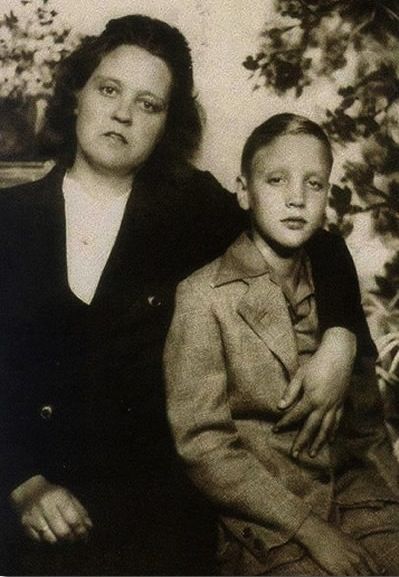 In those early days of his exploding fame, Presley embraced the power newspapers had to influence his career while tolerating their incursions into his private life. With equal composure, he accepted the praise and endured the criticism that flowed from columnists and pundits in the press.

Local newspapers in the fifties depended on two large national news services to provide them with daily news reports on events of interest outside their regional areas. Since by then almost everything about Elvis Presley was of interest everywhere, on most days the Associated Press (AP) and United Press International (UPI) kept the country's newspaper teletype machines clicking with articles about him.

The most personal Presley news that AP and UPI dispensed to newspapers in the 1950s involved the events surrounding the death of Elvis’ mother, Gladys Presley, on August 14, 1958. Elvis publicly displayed great grief over his mother’s passing, and to some it seemed callous to have his sorrow put on display in the country’s newspapers. However, before it was over, the coverage helped to soften the tone of many of his harshest critics.

Below are summaries of the wire service articles concerning Gladys Presley’s illness, death, and burial that appeared in US newspapers in August 1958. They provide a snapshot of how the American public shared the greatest tragedy in Elvis’ life day by day. 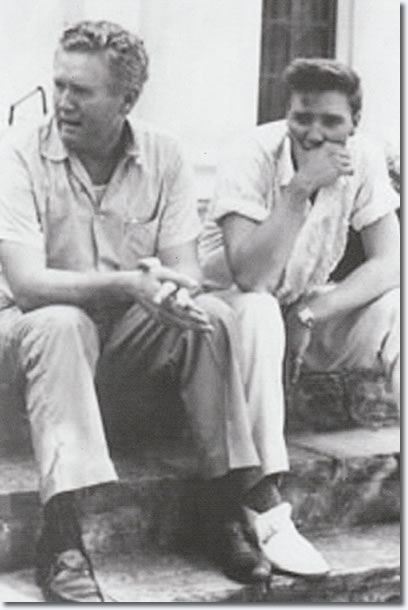 Datelined “Memphis, Tenn.,” the short UPI article began, “Mrs. Vernon Presley, mother of rock and roll singer Elvis Presley, entered Methodist hospital here Saturday for a physical exam.”  Elvis’ parents were returning to Memphis from Killeen, Texas, where their son was living while taking advanced tank training at Fort Hood. Vernon Presley told the UPI writer that his wife had been feeling badly for some time. He explained, “It was during the automobile trip from Killeen to Fort Worth, where we were going to catch a train for Memphis, that she suddenly became worse.” Doctors were examining Mrs. Presley to determine the cause of her illness.

An AP article three days after her hospitalization revealed that Gladys’s condition was much worse. “Drafted rock ’n’ roll singer Elvis Presley flew into Memphis Wednesday night and went straight to the bedside of his ailing mother,” the article stated, adding that, at the urging of a Memphis physician, Elvis had been granted an emergency 7-day leave from his army station at Fort Hood. When Elvis entered his mother’s hospital room, the AP writer reported she said, “Oh, my son, oh, my son.”

Later that night, UPI reported that Mrs. Presley was “in “critical condition” with a liver ailment at the Memphis hospital. Her physician, Dr. Charles Clarke, announced that, “She’s a desperately ill woman, but we’re a little more encouraged by her condition today.” Clarke said she was suffering from jaundice “with evidence of severe liver damage.”

A lengthier and more prominently placed AP wire story announced in the country’s newspapers that Elvis Presley’s mother had died suddenly of a heart attack at age 42. (Born on April 25, 1912, Gladys was actually 46 when she died.) “Vernon Presley said he was aroused at 3 a.m. by his wife, Gladys, ‘suffering for breath.’ He called her physician, but she was dead by the time he arrived.” When Elvis arrived at the hospital, the AP reported he “sank to his knees beside his mother’s bed and wept.” Toward the end of the straight news article, the unnamed AP reporter added a personal observation about the Presley family. “Elvis was devoted to his mother. Early in his career, when the golden flood began, he insisted on his parents living in luxury and comfort.”

“She was all we lived for,” Elvis sobbed at the hospital early Thursday morning after learning of his mother’s death, according to UPI. Today’s AP article quoted Elvis as saying, “It broke my heart. She was always my best girl.”

UPI’s wire service story reported that Elvis had his mother’s body moved to Graceland on Thursday and opened the doors “to friends for a last look at his ‘best girl-friend.’” Funeral services were scheduled for 2 p.m. today, followed by burial in Memphis’s Forest Hill Cemetery.

The unnamed UPI writer added a memorial note: “The plump Mrs. Presley, who seldom was quoted in the news but followed her son from coast to coast, was devoted to the youth who rocketed to fame as a rock ’n’ roll entertainer in the space of a few years.”

The AP reported that Elvis Presley was “near hysteria” at his mother’s funeral services yesterday. Elvis, 23, and his father, Vernon, 48, “wept throughout the service” at National Funeral Home in Memphis. The services were open to the public. UPI estimated that “women fans of the singer made up 95 per cent of the crowd in the chapel.” About 500 mourners accompanied the Presleys to the gravesite, according to AP. 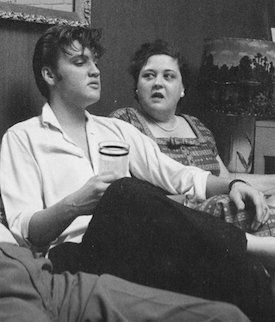 “Spectators lined the sidewalks along the three-mile route from the funeral home to the cemetery. About 700 persons were at the gravesite. They stood around talking and craning their necks to catch a glimpse of (Elvis) Presley.” Both AP and UPI reported Elvis’s “grief-stricken” words at graveside. “Goodby, darling. We loved you. Oh God, everything I have is gone. I lived my life for you. I loved you so much.” Elvis had to be helped back to the big black limousine that carried him to and from the ceremony. Walking ahead, his father was heard to say, “She’s gone. She’s not coming back … ”

“The Army has granted a five-day extension of singer Elvis Presley’s emergency leave. After attending funeral services for his mother, who died last week, Elvis was confined to bed temporarily with a virus infection and slight fever.”

Elvis Presley, returning to Ft. Hood, spoke briefly with an AP reporter in Dallas today. “One of the last things mom said was that dad and I should always be together. I’ll report back to Ft. Hood Monday morning. Wherever they send me, dad will go too.” The short article repeated the previously reported army statement that Presley’s outfit is scheduled for duty in Germany.

“Pvt. Elvis Presley wept when he stopped over (in Memphis) for three hours during the week-end. The rock and roll entertainer, en route for a tour of duty overseas, said, ‘coming home made me think of my mother,’ who died last month of a heart attack.”

The September UPI notice above was the last wire service report concerning the events surrounding the death of Elvis’ mother. However, beyond the news section, other areas in newspapers printed commentary about Mrs. Presley’s death. One of them was the “letters-to-the-editor” section. In many local papers across the country, patrons wrote in with their comments about the tragedy in Elvis’s life. Following is one of those letters. It appeared in Nashville’s The Tennessean paper on August 18, four days after Gladys’s death.

“To the Editor: With the sudden rise to fame and fortune of Elvis Presley, I’m sure his mother experienced much joy and satisfaction. At the same time with so much adverse publicity, sharp criticism, and the many harsh cruel words and untruths spoken about her only son, I’m sure she suffered untold anguish and heartache.

“It may be that with her passing some will be sorry for what they have said or written. Anyway, the tenderness and love expressed by the famed youth who was not ashamed for the world to see him cry his heart out over the loss of the dearest on earth to him should prove that there is a lot of good in perhaps the teenager’s—and many adult’s—greatest idol of the twentieth century.”— L. Albright, 3108 Doak Ave., Nashville

The editorial page was another newspaper venue for commentary, and some former harsh critics of Elvis used their space there in mid-August 1958 to reassess their previous judgments of Elvis Presley. Following is one such editorial. It appeared in The Evening News of Wilkes-Barre, Pennsylvania, on August 15, 1958, the day after Gladys Presley died.

“When Mrs. Vernon Presley, mother of Elvis Presley, died in Memphis, Tenn., yesterday, he tearfully observed: ‘She was always my best girl.’

“Mothers down through the centuries have received tributes from their sons in life and death, but none finer than these words from the famed rock ’n’ roll singer who has thousands of admirers in the opposite sex, including beauties of the screen.

“For all this adulation, not one of the attractive young women could or did replace his mother in his affection. What mother would not be proud of such commendation, especially from a son in the position of Elvis Presley. She must have been a wonderful mother to deserve these words of supreme praise and, on the other hand, the reputation of Elvis Presley certainly is going to be enhanced by his reaction to tragedy in his immediate household.

“Unlike so many sons, when fortune smiled, Elvis Presley thought first of his parents’ welfare. He provided generously for them. It was gratifying to note he saw his mother just a few hours before she died, having arrived home on emergency leave from the armed forces.

“A great many Americans, who knew little about Elvis Presley as an entertainer, will be impressed by his record as a dutiful son.”

Having willingly accepted his conscription into the army five months before his mother’s death, Elvis Presley had already started receiving some respect in the nation’s newspapers for doing his patriotic duty as a common soldier. The newspaper reports and commentary concerning the events surrounding his mother’s death further muted much of the criticism he and his family had endured over the previous two years. Ironically, for the most part, the condemnation of Elvis Presley in the nation’s press was finally brought to an end by the greatest tragedy of his life. — Alan Hanson | © October 2018

"A great many Americans, who knew little about Elvis Presley as an entertainer, will be impressed by his record as a dutiful son."