The Stanley Brothers—Billy, Rick, David—were never part of the “Memphis Mafia,” according to Marty Lacker, a long time Presley aide and friend. Late in Elvis life, the boys performed many of the services that better-known Presley insiders had done for years. But the Stanley boys were too young when they entered Presley’s world to ever be accepted into the cadre of good ol’ boys that took pride in being called the “Memphis Mafia.”

Elvis with Dee Stanley and her sons Rick, David, and Billy 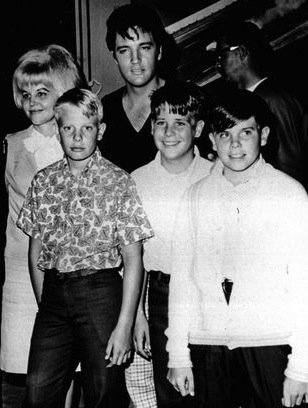 When Vernon Presley met Dee Stanley in Germany during Elvis’ army deployment there, her three sons were living at a Virginia boarding school.  One day in the spring of 1960, a big Lincoln Continental carrying Vernon and Dee pulled up in front of Breezy Point Farms. After their mother introduced Billy, Rick, and David, ages 7, 6, and 4 respectively, to their “new daddy,” the car whisked the boys to their new home—Graceland. There they lived for most of the next 17 years.

Despite their long association with Elvis, his biographers have shown little interest in the three boys. In his definitive Presley biography, Peter Guralnick details how Vernon’s relationship with Dee Stanley affected Elvis, but he says very little about her three sons. Guralnick never quotes them, suggesting that he didn’t interview them for his Presley biography.

After Elvis’ death, Dee and all of her sons published books describing their lives during the years spent with Elvis. Just a few years after Presley’s death, Dee and the boys collaborated on Elvis, We Love You Tender. In 1986 David came out with his own book, Life With Elvis. Billy followed several years later with Elvis, My Brother: An Intimate Family Memoir of Life with the King. Finally, Rick’s Caught in a Trap: Elvis Presley’s Tragic Lifelong Search for Love came out in 1992.

Reading the Stanleys’ accounts of life with Elvis is not on my bucket list. Although I must acknowledge the insanity of Presley’s final years, I have no desire to wallow in it or the excuses and blame such books promote. However, recently I read with interest a 1989 People Magazine article, in which Rick Stanley offered a few anecdotes from his years as a personal aide to Elvis.

In common with all written accounts from Presley insiders, however, Rick Stanley’s memories have to be taken with some caution. An admitted street drug user and alcoholic from his teenage years through his years working for Elvis, Rick’s ability to clearly recall events through the haze of addiction might be questioned. Also, discrepancies commonly appear in the various accounts of Presley insiders, making it hard at times to separate the truth from the BS. Marty Lacker, in particular, would later cast doubt on the recollections of all the Stanleys.

With that in mind, then, let’s see what Rick Stanley recalled in his People article in 1989 on the twelfth anniversary of Elvis’ death. First, he describes first meeting Elvis after the big Lincoln pulled up in front of Graceland.

“Elvis was standing over by the record player, listening to records. He walks across the room, and I know the first time I meet this guy, he’s different. He really rattled me by picking me up and saying, ‘These are my little brothers. That’s just the way I’m going to treat them.’”

When he went outside the next day, Rick says the yard was full of “cats, dogs, ponies, scooters, bicycles, tricycles, and swing sets,” that Elvis had bought for the boys. He also remembers many evenings of throwing a football around in the Graceland backyard with Elvis. “I felt very much at home when I was at Graceland,” Rick recalls. “We lived with Vernon in a house next door.” 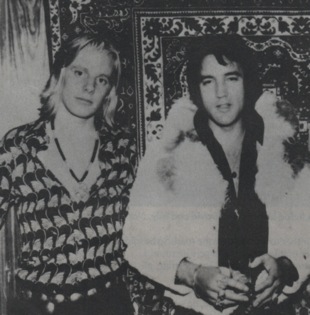 In 1971, Elvis asked Dee to let 17-year-old Rick begin working for him (right). To convince her, Elvis promised he would have a private tutor for Rick on the road. Lacker claims the Elvis brought Ricky into the entourage, “not out of love, but convenience. And because Vernon asked him to do it—Ricky was getting in so much trouble that Vernon wanted him out of the way.” Lacker further contented Elvis had hidden plans for Rick and his brothers. “The Stanleys would be his drug runners.”

That may have been what Elvis had in mind. On Rick’s first tour, Elvis revealed the name of his “tutor.” “I’m the teacher,” Elvis told him. “I’m going to teach you everything you need to know, and by the way, what you see and hear on the road, you don’t say nothing about at home.”

Rick recalled a rainy night on that tour, when Elvis tested the boy’s street smarts. It started when Elvis called Rick into his room at 3 or 4 o’clock in the morning and told him he wanted some cheeseburgers.

“It was December, freezing weather. ‘Where do I get them?’ and he said, ‘That’s your responsibility. Find out.’ I called the bellman; he didn’t know. So I literally get out in the streets of D.C. and find a place. And I put the cheeseburgers inside my coat and run all the way back to the hotel, get up stairs, go in the room … I pulled the hamburgers out, handed them to Elvis, and he said, ‘I don’t want them. I was just checking you out, to see if you could do it.’”

In addition to his many duties concerning Elvis wardrobe, preparing his hotel room, and helping him to his car after concerts, Rick claims he often rounded up of girls for Elvis. When Elvis wanted a girl, which was almost every night, according to Rick, he would announce, “It’s time to go trolling.” Then one of guys would head down to the lobby to pick out four or five of the girls for Elvis to look over. “I introduced him to a lot of girls, and members of the entourage introduced him to some. It was usually me, because I knew his taste—tall, clean girls.”

“I’d take them up, and there he’d be. All smiles and very gracious. Elvis would make women feel wonderful. They’d sit around in the suite for a while, and Elvis would look them over while he talked to them. Then he’d let me know which one he wanted to stay. When the visit wore down, I’d escort the others to the door, and the one that was chosen would stay behind.

“Then I’d instruct her, tell her what Elvis liked and didn’t like. I’d tell her that if things worked out in a way she decided she wanted to stay the night—and I knew they’d already decided, or they wouldn’t be there—that there might be some things she would want to know.”

• What Elvis does in Vegas …

Rick was also involved in the conspiracy to keep Elvis’ wife from knowing about the other women. “Priscilla would fly into Vegas on weekends, Rick recalls. “I’d have to take Priscilla’s dresses out of the suite when she was away and write down where each dress was hung and its color because she wanted them kept in a certain order. I’d move them back when he was about to come in.” 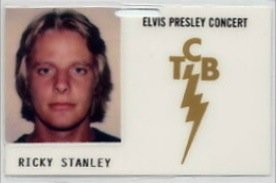 The "Kit” went everywhere Elvis went, and Rick was the designated carrier. Contents: “Dexedrine, Black Beauties. Then you’ve got the Class-A Percodan, Demerol, codeine. There were barbituates—Tuinal, Seconal, Nembutal, Carbital. Toward the end there was liquid Demerol. Needles. Plus 10 grand in a wallet, makeup, a driver’s license and a lot of jewelry.”

When Vernon confronted his son about his drug use, Rick says Elvis would always respond, “I know what I’m doing. Use and abuse are two different things.”

Rick Stanley also recalls how two sides of Elvis’ personality could surface in reaction to the same event. He says one night in Vegas, Elvis noticed that some money and a few intimate photos of Priscilla were missing from his "Kit." An aide nicknamed Hamburger James was fingered for the theft, and an angry Elvis rounded up the guys and headed to the airport, where they dragged James off a plane about to leave for Memphis.

Back in his hotel suite, Elvis slapped the sobbing and scared culprit a couple of times. Then, says Rick, an amazing thing happened:

“Hamburger James got a funny look on his face and wilted like a baby. He cried and cried. Like his heart was broken. He said he was sorry he stole, and he would give it all back, and he knew that he had done something that he couldn’t ever be forgiven for.

“Elvis looked at him for a minute. And then he broke down and started crying too. He just sobbed and sobbed. He went down on his knees in front of Hamburger James and said he was sorry. He kept saying to him, ‘Why didn’t you let me know if you needed money? Why didn’t you let me know if you wanted to go back to Memphis? I would have given you money. You didn’t have to steal from me.’ They cried and cried like that for a long time, and Elvis kept telling Hamburger James that he didn’t have to leave, that he could keep his job.”

Rick Stanley tells other stories about Elvis in his People article, but this seems like a good one to end with here. It shows that despite the drug fueled bizarre behavior that marked his final years, Elvis was still able to show compassion for a man who had done him wrong. In the end, it’s hard to find anything inspiring or noble about the way Elvis went out, but I’d like to think that there was a touch of decency, perhaps even of love, in him all the way to the end. — Alan Hanson | © November 2014

"On Rick’s first tour, Elvis revealed the name of his tutor. 'I’m the teacher,' Elvis told him. 'I’m going to teach you everything you need to know, and by the way, what you see and hear on the road, you don’t say nothing about at home.'"