Elvis-Nixon is surely one of American history’s strangest pairings. December 21, 2010, is the 40th anniversary of Elvis Presley’s White Houe meeting with President Richard Nixon in 1970. It’ll be a two-teddy bear year on Shop.Elvis.com. A smilin’ Dick Nixon Bear in a gray suit shaking hands with a purple velvet caped Elvis Bear. The President and the King of Rock ’n’ Roll—just think of all the double profit possibilities!

Faye Flore led off 2010’s hottest Elvis anniversary event with her lengthy article in the Los Angeles Times in mid-January. I always have mixed feelings when reading an Elvis story by a journalist who was not well informed about the man. They tend to give credence to false assertions about Elvis that have been kept alive on the internet. On the other hand, not being Elvis fans, their perspective is not contaminated by the adulation commonly found in the writing of the Presley faithful. 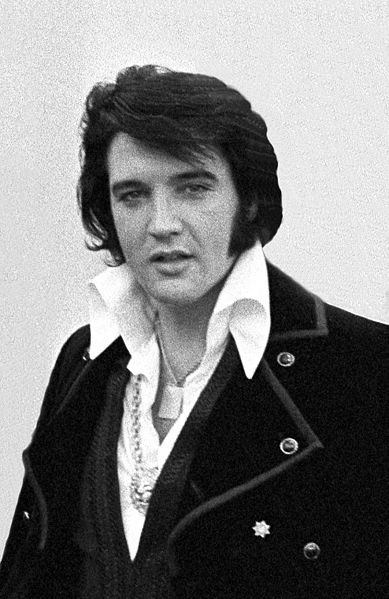 Fortunately, Flore’s article is both objective and entertaining. It even includes some new information about the often-told Elvis-Nixon tale. Her sources were former Nixon aid Egil “Bud” Krogh and long-time Elvis friend Jerry Schilling. Both men were eyewitnesses to the Elvis-Nixon meeting on December 21, 1970. Krogh and Schilling met again at the National Archives in Washington D.C. early in January to recall the events of that day. “A crowd waited in the frigid cold for a seat,” Flore reported. “Even in the imperious capital, Elvis can still pack a house.” The Krogh-Schilling forum, noted Flore, “offered an hourlong window into a simpler time, before Watergate or terror attacks, when the world’s most famous man asked the world’s most powerful one to grant him a wish, and got it.”

Flore then recounted the well-known events that led up to the Elvis-Nixon meeting nearly 40 years before. The story began on December 19, 1970, when Elvis flew alone out of Memphis after a confrontation at Graceland with his wife and father over his spending habits. Flore says Elvis took the first flight out of Memphis, “which happened to be bound for Washington.” In fact, Elvis probably headed for D.C. because Joyce Bova, his main lady-on-the-side at the time, lived there. From Washington he decided to fly on to Los Angeles. As he was about to board, however, an airline steward discovered Elvis was carrying a gun and told him he couldn’t bring it on the plane. A petulant Elvis stomped away, but was chased down by the pilot, who told him, “I’m sorry, Mr. Presley, of course you can keep your gun.” Elvis re-boarded, still packing his pistol.

Elvis called Schilling in LA to pick him up at the airport. The next day Elvis decided he wanted to go back to Washington. He wouldn’t tell Schilling why, and Jerry knew better than to question the King. On the plane, Elvis, who had only written a few letters in his life, penned a rambling, five-page letter to the president. In it Presley expressed his concern about the drug culture and other divisive groups in the country and offered to “be of any service that I can to help the country out.” Although Elvis claimed to have no “motives other than helping the country,” he asked Nixon three times in the letter to make him a “Federal Agent at Large.” Elvis concluded by telling the president he’d like to meet him.

• Elvis bonded with the president

On arriving in Washington that night, Elvis decided to personally deliver the letter to the White House. “I don’t think this is such a good idea,” Schilling told him. Still, Elvis had the limo driver pull up to the White House’s northwest gate, where he got out and handed the letter to a security guard. “Schilling, realizing that in the dark Elvis looks a lot like Dracula,” Flore noted, “jumped out and explained. The guard agreed to deliver the letter to the president. Elvis and Schilling retired to the Washington Hotel to wait.” 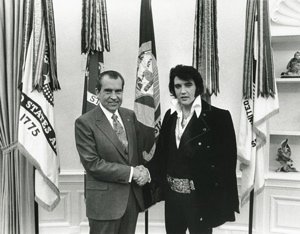 Through the night, Elvis’ letter crossed the desks of various White House officials, until Nixon’s chief of staff H.R. Haldeman decided having Elvis as an ally in the war against drugs might help the president, and approved the Elvis-Nixon meeting. At 11:45 a.m. on December 21, Elvis entered the White House wearing “tight purple velvet pants, the matching cape, a white point collared shirt unbuttoned to reveal two enormous gold chains.” At 12:30 Nixon entered the Oval Office for a scheduled five-minute meeting with Presley. Flore described what followed.

“Soon … Elvis is pulling out pictures of his wife and baby, along with photos of assorted police and security badges he has collected over the years. The allotted five minutes pass, and they’re still going, bonding over their lowly beginnings (poverty, challenging childhoods). They commiserate about the burdens of fame … Elvis offers to help Nixon fight the war on drugs and restore respect for the flag. Nixon admires Elvis’ big cuff links."

• Elvis got his Christmas toy from Santa Nixon

Flore continues: “Then Elvis asks for what he’s been after all along, a big gold badge to add to his collection, the thing that would make him a federal agent-at-large for the Bureau of Narcotics and Dangerous Drugs. He had tried to get one from an agency head and was turned down, which is why he decided to go straight to Nixon.

“Elvis is crestfallen, visibly wilted under the weight of all that gold, a man who could have anything—cars, women, houses—except the one thing he wants most. Nixon takes one look at him and caves.

“Elvis is so excited he gives the president a big hug.”

Elvis then gives Nixon a commemorative Colt 45 pistol he carried into the Oval Office to the dismay of the Secret Service. Then, according to Flore, the two men decide to keep their meeting a secret. “Nixon is sinking in the polls, Elvis is working on his comeback, and neither of their constituencies was likely to understand.” It isn’t until over a year later that columnist Jack Anderson broke the story that, “Elvis Presley, the swivel-hipped singer, has been issued a federal narcotics badge.”

Neither Elvis nor Nixon needed to worry that knowledge of their secret meeting might harm their future prospects. In fact, even as they met in the White House, both men had already taken the first steps on the road to self-destruction. Nixon’s arrogance would lead to the Watergate cover up and his resignation of the presidency 3 ½ years later. For Elvis, there would be no comeback, professionally or personally. His increasingly bizarre behavior would first cost him his wife, and eventually his life.

In addition to the iconic picture of the two men together, the items exchanged during the Elvis-Nixon encounter that day can still be viewed at the institutions dedicated to their lives. In closing her article, Faye Flore explained:

“The commemorative gun is on display at the Nixon Library in Yorba Linda, Calif. The badge, specially prepared by the Bureau of Narcotics and Dangerous Drugs with Elvis’ name on it, now hangs in his home in Graceland, on the Wall of Gold.” — Alan Hanson | © February 2010

"Neither Elvis nor Nixon needed to worry that knowledge of their secret meeting might harm their future prospects. In fact, even as they met in the White House, both men had already taken the first steps on the road to self-destruction."