Did Girls Have Sex on Their Minds
When Watching Elvis in the '50s?

“Screaming girls”—that was a recurring theme in newspaper reviews of Elvis’ stage shows in 1956 and 1957. At almost every stop, the girls screamed so loud that no one could hear Elvis sing. Even the musicians on stage had trouble hearing each other. Scotty Moore once said, “We were the first band directed by an ass.” He meant that because of all the screaming, he and the other musicians couldn’t hear Elvis sing, so they took their cues from watching Elvis move from behind. Elvis himself explained that at times in 1957 he had to cover his ears with his hands so that he could hear himself sing.

These days girls screaming at a concert is not unusual, but back in 1956 and 1957 it was a new phenomenon. It frightened some adults and puzzled nearly all of them. Sinatra’s fans had certainly gotten excited and some swooned, but they hadn’t abandoned all reason and screamed hysterically and continually like Elvis’ fans did. Why did they do it?

• Specialists say girls had sex on their minds while watching Elvis

In an article titled “Girls Identify Elvis as Lover” in the September 28, 1956, issue of the New York Daily Mirror, writers Norman Miller and James McGlincy tried to uncover the reasons behind the Presley craze by consulting psychiatrists, psychologists, and social workers. After doing so, they came to the following shocking conclusion.

“When a teenager on the threshold of womanhood watches or listens to Elvis Presley, there is only one thing on her mind—sex. She may deny this. She may not even believe it herself. But that’s what it is, according to specialists.”

Miller and James then presented their evidence in the form of quotations from these “eminent,” but unnamed, specialists. “Watch their faces,” one psychiatrist said of the girls in Elvis’ audiences. “See their twitching, their uncontrolled movements. They are in ecstasy. They have identified Presley as their lover. Many of them are, to use an old-fashioned term, ‘good girls.’ Most of them, probably. They never would let themselves go with their own boyfriends. But, watching Presley, it’s safe.”

The psychiatrist pointed out that this reaction was not confined to teenage girls. He also had business women as clients, who he said felt frustrated and confined in what was still a man’s world. 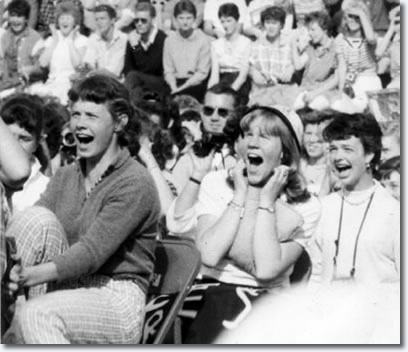 “They are fearful of romantic involvement,” explained the doctor. “But they still want to escape the masculinity of the business world. They want to be women. Elvis Presley gives them that. They escape to their natural femaleness, listening to him. And it’s perfectly safe. Next day they go back to work with no ties, no danger, as there might be in a love affair. It’s vicarious. But it is a release.”

A psychologist offered another theory for why Elvis affected girls and women as he did. “He’s primitive man. His dress, his actions, the music he sings, all these are primitive. And they arouse primitive instincts. Put Elvis Presley in a Brook Brothers suit, shave the sideburns and make him stand still while he sings a romantic ballad, and he would be just another unsuccessful entertainer.”

The analyst went on to contrast the female reaction to previous singing idols with that provoked by Elvis. “Rudy Vallee crooning into his megaphone was a nice-looking young man who attracted older women who wanted to mother him,” he explained. “I think Sinatra probably always made the girls feel they ought to take him home and feed him a big steak, another form of maternal instinct. As for Johnny Ray, who knows? But in all those cases there was some sweet, romantic attachment between the fan and the star.

“There is nothing sweet about it when a young girl goes crazy for Elvis, as all of them seem to have done. I’ve talked with some of them and they certainly can’t define their reactions too well. They say, ‘He’s gone,’ or ‘He’s the greatest.’ What they mean is that they are gone, probably for the first time in their lives. Many of them are going through that disturbing, puzzling period of their lives when they begin to awaken to the fact they are women.”

As you can imagine, within days some of the girls who felt they had been over-analyzed in Miller and McGlincy’s article, responded in the Mirror with letters-to-the-editor. Two of them used sarcasm to counter the authors’ conclusion that “sex” was the only thing on their minds when they watched Elvis.

Vivian Barnsworth wrote, “Sex! Yes, that’s it! That’s what Elvis has got. That’s what sends those shivers up and down your spine. Oh, sweet daddy—sing to me Elvis, sing to me!”

Bertha Millerman added in her letter, “I’ve always wondered what irresistible attraction Elvis has had for me. Now I know, and I’m dreadfully ashamed. The Norman Miller-Jim McGlincy series has opened my eyes to my iniquity. Oh, sex—begone! Elvis, why have you done this to me?”

• Fifty years later, girl admits, “it was like a sexual experience”

When I spoke with some women who had attended an Elvis concert back in 1957, most of them admitted they had screamed. But, as the psychologist explained in the Mirror article, most of them couldn’t explain exactly why they had done so. For some it was clearly a mob response. Everybody else was screaming, so they did too.

Only once did I get a thoughtful response to the question, “Why did you scream when you watched Elvis?” It came from a woman, who was 15 when she saw Elvis perform in Spokane’s Memorial Stadium on August 30, 1957.

“We screamed when he came out. I didn’t know I was going to yell and scream. I’d never done that in my whole life. It was spontaneous. You know, his wiggle and that leg going; all of us started screaming when he did that. There was that feeling there like when I matured; it was almost like that feeling. He could excite you with his music so much. My mom’s gone; I guess she wouldn’t care if I said it now … it was like a sexual experience. It went through your body kind of like that.”

So maybe Miller and McGlincy came to the right conclusion back in 1956, at least for some of the girls. But then, Elvis was also right back then when he said, “We’re all getting something out of our system and no one’s getting hurt.” — Alan Hanson | © September 2008

"They want to be women. Elvis Presley gives them that. They escape to their natural femaleness, listening to him. Next day they go back to work with no ties, no danger, as there might be in a love affair."