I’m sure I’m not alone among Elvis Presley fans in noticing the similar circumstances surrounding the 2009 death of Michael Jackson and the death of Elvis in 1977. Both died suddenly and unexpectedly. The misuse of prescription drugs obviously played a role in both deaths. For both men a huge, spontaneous public out-pouring of grief and remembrance resulted in wall-to-wall coverage by seemingly all media outlets.

Another similarity arising from the two icons’ deaths can be seen on the newsstands. As with Elvis back in 1977, the image of Michael Jackson can be found on the covers of dozens—perhaps hundreds—of magazines and tabloids. I haven’t purchased a single publication with the King of Pop on the cover, but when Elvis died, I picked up several dozen magazines with covers featuring his image. I still have most of them, and recently I pulled them out of storage to take another look. 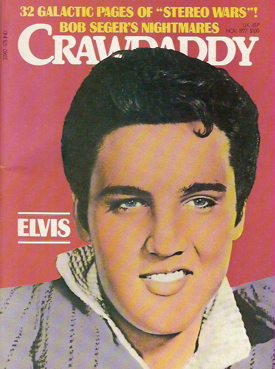 • Finding a jewel among the junk in those Elvis magazines

Of course, most of those magazines were rushed to newsstands by publishers simply looking to make a few bucks on Elvis’s untimely death. Some merely reprinted dozens of articles that had appeared in magazines throughout Elvis’s career. Many others contained nothing by meaningless articles recounting Elvis’s exemplary life and portraying him as the only perfect man to walk the earth since Jesus.

Among all the filler, however, an occasional thoughtful tribute to Elvis was to be found by those of us who were then trying to come to grips with the real meaning of the man’s life. In the months following Elvis’s death, the article that best answered that question for me appeared in the November 1977 issue of Crawdaddy magazine. Founded in 1966, Crawdaddy was the first American magazine to treat rock ’n’ roll as a serious form of music, on a level with jazz and folk. It’s not surprising, then, that the magazine commissioned several respected writers to give their perspectives following Elvis’s death.

The best article in that issue was written by Robert Ward, an up-and-coming novelist, whose work had already appeared in Esquire, New Times, Penthouse, and Sport magazines. In later years, adding to his nine published novels, Ward became a screenwriter, with nine episodes of Hill Street Blues and eight episodes of Miami Vice among his many TV credits.

• The magic of hearing Elvis’ voice for the first time

In his 4,000-word article about Elvis in 1977, Ward discussed both the impact of Elvis on his own life and the man’s influence on American culture. After explaining the alienation he felt as a 12-year-old in the stifling American culture of the mid-fifties, Ward described one of the defining moments of his life—the first time he heard Elvis Presley’s voice. He was reading a book and listening to the radio in the cellar of his parents’ small Baltimore home, when disc jockey Buddy Deane played “Heartbreak Hotel” for the first time. Over 20 years later Ward recalled the intensity of that moment.

“Instantly I can see it, feel it, touch it all … I’m there … I’ve always been there … on the blackest of streets … and I can see the bellhop, his face in his hands, and the desk clerk, sitting behind a worm-eaten desk with his black shirt, black face. Behind him are the letter slots, but they are empty today, tomorrow, forever—it’s the saddest, loneliest tableau in the world, and the singer’s voice, expertly complemented by the raw blues guitar (and I have never heard the word “blues"), makes this world seem an ideal … it’s a perfect loneliness, a perfect dream space where all the pain is around me and yet I’m magically protected from it by the tough, vulnerable, infinitely sensual voice. Nothing in my entire life has hit me with the force of the first moment I hear Elvis Presley sing ‘Heartbreak Hotel.’ I literally cannot bear for the song to end … ”

But the song did end, and young Robert ran upstairs to call Deane and request he play it again. He couldn’t get through; the lines were jammed. Running back downstairs, he waited by the radio. Forty minutes later, Deane spoke of “hundreds” of callers who wanted to hear “Heartbreak Hotel” again. Once again, Ward was mesmerized.

“The song starts again, and instantly I am transported as I had been the first time. The exquisite pleasure I get from Presley’s voice—the way it seems to put me in touch with something infinite and magical—is so baffling to me, so wonderful, that after the song finishes for the second time, I’m so dazed I can’t remember his name. I know it is something weird, wild and lovely and sweet all at once. I have to own the record, without delay.”

Jumping on his American Flyer bike, Ward pedaled two miles to the “Music Mart.” He couldn’t find “Heartbreak Hotel” in the new records section, and when the owner asked the name of the singer, Ward couldn’t remember, exactly. “Melvis Peasley, I think,” he stammered. “It’s by who?” asked the owner. The boy offered a few more guesses—“Melvis Persley … or Gelvis Pesley … or Belvis Pesley.”

After asking the owner to call him when the record came in, Ward pedaled home, singing the lyrics to “Heartbreak Hotel” all the way. “God, I feel good singing those sad sad words,” he remembered. “Pedaling and sweating and singing, I have never felt so goddamned good in my whole life. Whatever his name is, I love him. His great, distant/near, tender/rough voice lifts me up, gives me strength, courage, and above all, ecstasy. He is mine, all mine.”

Ward jumps ahead 21 years to August 1977. He was living in Manhattan then. One day he answered the phone. It was his father calling from Baltimore. “I got to thinking of you tonight,” said his father, “you know, when I heard that Elvis Presley died. You know how much you used to like his records.”

That’s how Ward learned that Elvis had died. Although he hadn’t bought an Elvis record in years, he felt “ridiculously shaky.” For some reason, the news of Elvis’s death seemed “like your own past coming to bury you.” Like many of us at that time, Ward for the first time tried to understand the influence Elvis had left behind in his own life and on his generation. He came up with the following:

• Finding the meaning in Elvis’ life

“We loved you. You were our Youthful God, and when we believed in you, you made us believe we too were gods. And then you went and did it, man. You got old, you got fat, you grew lazy, confused. And then you went down the crapper. You flunked, baby. You weren’t a legend at all. You were only a mortal, and a Southern shitkicker to book, like your shitkicker fans. And you left us all alone.

“Yet, like our hometowns, like our parents who we once rejected—like our own pasts—finally we are powerless to reject Elvis without severing the vital connections that keep us alive. His life was a triumph over low birth, lack of education and a deadening conformist era which broke many a more advantaged man’s heart. He taught us how to begin to feel, what it meant to turn yourself loose. He seized his time, and he gave it back to us—recharged, renewed, filled with all the courage, tension and sweetness which made up his own complex and lonely heart. In short, he was simply one of us—and for a very long time, one of the best.” — Alan Hanson | © July 2009

"Nothing in my entire life has hit me with the force of the first moment I hear Elvis Presley sing ‘Heartbreak Hotel.’ I literally cannot bear for the song to end."