Sam Phillips Was Big Daddy
At Sun Records in the Fifties

“Sam Phillips was ‘Big Daddy.’ I mean, I don’t care what they say he did or didn’t do, but that studio had a lot to do with the success of Elvis Presley.” That appraisal was voiced by legendary record producer Phil Spector in the 1971 radio documentary, The Elvis Presley Story. Spector's statement reveals the conundrum of Sam Phillips’ role in the career of Elvis Presley. Everybody seems to agree that as headman at Sun Records in the mid-fifties, Phillips played an important role in launching Presley’s career. But what exactly was his role? What did he do, or not do, that earned him legendary stature in the founding of white rockabilly? 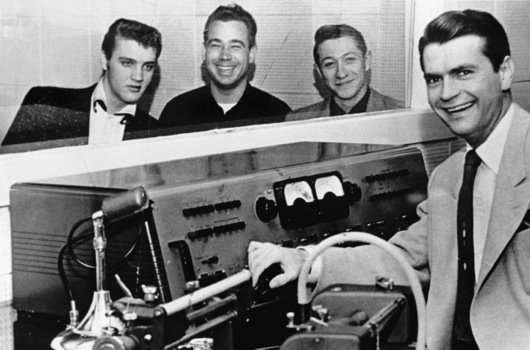 When I became an Elvis fan in the early ’60s, I soon became aware of Sam Phillips’ image as the man who “discovered” Elvis. But there, at least for me, the substance of Sam Phillips ended. He seemed no more than the man who sat quietly in the control booth while Elvis, Scotty, and Bill experimented in Sun’s matchbox studio. Then one day he stuck his head out of the control room door and said, “Hey, that sounds pretty good,” and the rest was history.

Sam Phillips remained a shadowy figure in my Elvis world until the singer’s death in 1977. Then the journalists sought Sam out and put him on their TV specials. I remember how strange he seemed to me then. At times he was modest about his achievements in the early days of rock ’n’ roll, while on other occasions a sense of self-importance was evident.

Billboard published an interview article about Sam Phillips in its May 23, 1970, issue. It’s understandable that author James D. Kingsley sought Phillips out for comment, since Elvis’s career was experiencing a renaissance at the time. Some of Phillips’ comments in the article shed some light on what he really “did” or “didn’t” do to help Presley get going, at least as Sam saw it.

Phillips traced his philosophy about music back to “Uncle Silas Payne,” a blind black man who lived with his family when Sam was a child. “He taught me that there was a message in every song and there was a feel in everybody’s deliverance of that song,” explained Phillips. “He also inspired in me that any message could be put forth better if it were encouched in music.”

Then came the fateful encounter. “It was with this belief that a young man named Elvis Presley came to my studios with long hair,” Phillips recalled. “He walked up and down in front of my studios before coming in the door. As he entered, I detected the same type of fright in his eye and demeanor that I had seen so many times in the black man’s expression and manner. Although he came there only to make a small record for his mother’s birthday, he came there with the countenance of a person who had been through trials, hardships and tribulations. Thank God, I was not wrong in his facial expressions.”

I suppose we should give Sam some leeway here. It’s been well established that he wasn’t there the day when Elvis first came to the studio to make that recording for his mother. What’s astounding in Phillips’ statement, however, is his claim that he was originally drawn to Elvis not because he “sounded” like a black man, but because he “looked” like one in his “expression and manner.”

Once Phillips had this young white boy with the countenance and experience of a black man, it was what he “didn’t do” that became important. He didn’t try to mold Presley into his image of a black r&b singer. Instead, he sat back and let Elvis, with help from Scotty and Bill, find his own style.

Phillips credits Presley’s success at Sun with bringing other legendary names to the door. “After Elvis hit, many white persons of varying backgrounds, but equally deprived of opportunity in their opinions came to the studios to be heard,” Sam explained. “They were met with the informality that they were raised up in and with. It was, I believe this way that such persons as Jerry Lee Lewis, Carl Perkins and Johnny Cash came to my studios.”

Phillips particularly remembers the day early in 1955, when Johnny Cash came into the studio asking for an audition. “It is my opinion that Johnny, after hearing of the success of Elvis—as a white man that was reasonably unconventional in his style at that time—finally gained the courage to walk into the studio for the sole purpose to be heard, for the purpose of making his message known through recordings.”

Sun’s “Million Dollar Quartet” all succeeded in the music business, according to Phillips, because each exhibited the same core set of critical characteristics, born in the shared poverty of their youth. “It was from the work with these great artists that things began to change in music,” Sam recalled. “They were rough, but willing to be polished. They created a new breed of excitement and expressions. They were fearless and willing to put up with the criticism any new artist with changes has to take. The abuse for all must have been hard for them to take. But they were message sellers and they had their messages to sell.”

In that 1970 interview, Sam Phillips took no credit for molding the early careers of the four legendary Sun performers. “I have to think that it had to be fate that guided us,” said Phillips of the early days at Sun, “and such great artists as Johnny, Elvis, Jerry Lee and Carl, walked in and helped me do my thing—that was to keep music from being stereotyped.”

In the end, it seems that Sam Phillips’ eminence as a music pioneer rests somewhat both with what he “did” and what he “didn’t” do. He “did” have faith in the message of young, poor white singers and gave them an opportunity to voice that message. He “didn’t” interfere with their creative development nor did he hold them back when it was time for each to move on to a bigger stage. When he first opened his own studio, his boss warned him that he was going to go broke. He had the courage to do it anyway, and for that Sam Phillips deserves the title Phil Spector gave him—“Big Daddy.” — Alan Hanson | © April 2010)

"Phillips claims that he was originally drawn to Elvis not because he 'sounded' like a black man, but because he 'looked' like one in his expression and manner."