Many Entertainers Defended
Elvis Presley in the Fifties

It’s well known that religious and civic leaders, along with newspaper reporters and columnists, savagely criticized Elvis Presley when he burst on the show biz scene in the 1950s. One group who generally defended Presley in the public discourse of that era consisted of his fellow entertainers. Admittedly, some performers openly condemned Elvis. Singer Mel Torme, for example, said, “I was shocked to hear that a man of integrity like Hal Wallis had referred to Presley as a great dramatic actor. It just shows how far a man will go for the almighty dollar.” (The Arizona Republic, June 14, 1956). And there were undoubtedly other entertainers who felt contempt for Elvis but kept it to themselves. 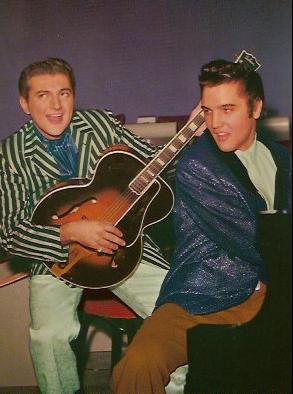 However, the majority of entertainers who spoke openly about Presley in the fifties defended him or, at least, offered fair and unbiased opinions about Elvis. As you’ll note in the following list, reasonable assessments of Elvis came from a mixture of performers in various fields of the entertainment business.

Elvis and Liberace were often mentioned in the same sentence in the ’50s, not because of any similarity in their stage shows, but because of their unconventional clothes and appearance. On November 15, 1956, Elvis attended Liberace’s show at Las Vegas’s Riviera Hotel. Later the two entertainers put on an impromptu 30-minute show for reporters and photographers in Liberace’s dressing room. According to a caption accompanying an AP wirephoto, Liberace made the following comment during that encounter with Elvis.

“Elvis and I may be characters—he with his sideburns and me with my gold jacket—but we can afford to be.”

The bandleader and trombone player, along with his brother Jimmy, had seen Elvis’ act close up. Presley appeared six times on their nationally televised “Stage Show” in January, February, and March 1956. A few months later the brothers were preparing for a concert in Charlotte, North Carolina, when Elvis brought his show to town. A reporter for the Charlotte Observer asked Tommy what he thought about the controversy over Elvis. He responded:

“It’s a hullabaloo about nothing. I don’t particularly care for his type of music, but that’s the teen-agers’ choice and if they like it we’ll give it to them. Only time will tell if he has any lasting qualities. Most people have forgotten how they used to swoon over [Rudy] Vallee. The kids want Elvis now and they should be able to have him—the folks over 40 had swing. Remember the controversy over that?”

And what did the aforementioned Rudy Vallee feel about being compared to Elvis Presley? He commented as follows in Erskine Johnson’s “Hollywood Today” column in the San Francisco News on December 7, 1956.

“I never had a great singing voice and neither does Elvis. He’s probably as shy a kid now as I was then. I covered my shyness with a megaphone and Elvis covers his with those gyrations. I think he’s more sinned against than a sinner.”

Although separated by a couple of generations, Presley’s and Vallee’s careers later overlapped when they worked together in Elvis’ 1968 film Live a Little, Love a Little.

Ok, Natalie dated Elvis, and so she was obviously biased in his favor. Still, she was in the business. A former child actress, she had blossomed into an 18-year-old sweater girl and Oscar-nominated actress by the time she met Elvis in 1956. However, in her following comments in the San Francisco News on October 14, 1956, she sounded more like a normal 14-year-old girl with a crush on Elvis.

“I saw his picture in the paper before he got very popular and I liked his eyes. I thought then I just had to go out with him. He’s really great and the most totally real boy I’ve ever met. He’s a real pixie and has a wonderful little boy quality. He’s very courteous and polite and so sweet! He’s the nicest boy I know. A wonderful dancer—and he sings all the time to me. All the girls in the country are in love with him—so why should I be any different?”

The 48-year-old American jazz pianist and bandleader seemed an unlikely Elvis Presley defender in 1956, but that’s exactly what he was in a December 19 article in Variety.

“I’ve heard some musicians say, ‘That man ain’t sayin’ nothing.’ It’s just a matter of rival performers trying to detract from those who are doing business. As far as I’m concerned, a man that sells that many records must be saying something to somebody.”

The 19-year-old Sands seemed like an Elvis-Wannabe when his hit record “Teenage Crush” hit the pop charts in 1957. However, he told Harold Heffernan in a Detroit News article on March 12 of that year that he had no intention of growing sideburns or replicating Presley’s stage gyrations. He made it clear, though, that he didn’t disapprove of Elvis’ use of both.

“Elvis originally grew those sideburns to make him look older,” Sands explained. “As for the movements, I wish I could do them. But they’ve got to be natural, as they are with Elvis, for them to come off well.”

Over the years Elvis historians and fans have continued to disparage Sinatra for his alleged criticism of Presley in October 1957. However, when Sinatra called rock ’n’ roll singers “cretinous goons” then, he was referring to rock ’n’ roll music in general, and he made no mention of Elvis specifically. Five months earlier Sinatra had addressed the Presley controversy directly. Variety reported his following reasonable comments in its June 5, 1957, edition. On the set of Pal Joey, Sinatra was asked if Elvis was a “freak” in the music business.

“Only time will tell,” he said. “They said I was a freak when I first hit, but I’m still around. Presley has no training at all. When he goes into something serious, a bigger kind of singing, we’ll find out if he is a singer. He has a natural, animalistic talent.”

Like Tommy Sands, Johnny Ray was often compared with Elvis. Both rose quickly in the music industry, as seemingly over-night successes. Due to his blues-influenced music and vigorous stage show, some have credited Ray with being a forerunner of rock ’n’ roll. As to be expected, then, Ray defended Presley during a 1957 interview in Germany. Variety reported Ray’s comments in its August 21, 1957, issue.

“I’m inclined to sympathize with Presley in the controversy he’s stirred up. He’s accused of inciting juvenile delinquents. That’s ridiculous. You can’t tie a delinquent kid to a hit record by Presley. Charges against him are unfounded, unfair, and bigoted. People resent his success. He’ll be around a lot longer than most of them think. And his records have stimulated a controversy that’s helped the whole record industry—we have Elvis to thank.”

An internationally renowned ballerina, Slavenska was a star performer at New York’s Metropolitan Opera. She and her dance company were in Toronto for a two-week run of performances when Elvis came to town in April 1957. Elvis admitted he had never heard of the famous ballerina, but she had heard of him. She was on hand to meet Presley and pose for photos with him. She had praise for Elvis’ often-maligned stage gyrations.

“Mr. Presley has a very definite form of dance rhythm,” she told reporters. “This may well be what creates the hysteria.”

Arguably Hollywood’s most respected actor at the time, Brynner had appeared in two blockbuster films in 1956—The Ten Commandments and The King and I—winning an Academy Award for Best Actor in the latter. He was on the set of Buccaneer in October 1957 when Elvis gave his controversial show at the Pan-Pacific Auditorium in Los Angeles. Columnist Hedda Hopper reported that she had “rarely seen a madder man than Yul Brynner” when he learned of the city police department’s decision to film Presley’s show the next night.

“I hold no brief for Presley,” Brynner told Hopper. “I’ve never seen him, but when police are allowed to set up cameras and be judge, that’s an invasion of an artist’s rights and should be looked into mighty carefully by every artist and actors’ agency in our business.”

Elvis admitted that he didn’t understand why so much criticism was aimed at him in the fifties, and he was hurt by some of it, especially that portion coming from the religious pulpit. The moral support he received from fellow performers, especially from highly respected entertainers like Frank Sinatra and Yul Brynner, must have been gratifying and reaffirming. It helped soften the condemnation coming from other quarters during his first couple of years in the spotlight. — Alan Hanson | © March 2011

"The moral support he received from fellow performers must have been gratifying and reaffirming. It helped soften the condemnation coming from other quarters."