A Magic Moment With Elvis Presley
The Priscilla Myers Story

Throughout his career, Elvis Presley took the time to personally visit fans who were limited by disabilities, injuries, or serious illnesses. Just how many times he went out of his way to brighten the lives of these special young people will never be known. Many such visits were noted in the press, but publicity was not Elvis’ motive for these one-on-one meetings. Many other encounters remained private, shared only by Elvis and the young person whose wish he made come true.

Many of those personal visits occurred while Elvis was touring the country during his early years of fame in the fifties. Just how Elvis learned of these unfortunate fans who longed to meet him is unknown. Some probably became known through the press. Family members of others may have written to Elvis at Graceland. Colonel Parker probably brought others to Elvis’ attention. However he learned about them, Elvis appears to have done his best, within the confines of his hectic schedule, to arrange meetings  with them.

This is the story of one of them. In the spring of 1956, 13-year-old Priscilla Myers of Dayton, Ohio, was suffering from a serious lung ailment, a complication of genetic cystic fibrosis. In May, Priscilla was checked into University Hospital in Columbus, 70 miles from her home, in preparation for surgery. That spring, Elvis Presley’s busy tour schedule included an appearance at Columbus’ Veterans Memorial Coliseum on May 27.

Knowing of Priscilla’s fondness for Elvis, several Dayton disc jockeys got word to Elvis, and arrangements were made for him to visit her at the hospital a few days before she was scheduled to undergo the surgery. Unfortunately, Elvis’ tight schedule conspired to prevent the meeting. He arrived in Columbus just minutes before going onstage and had to leave town immediately after his performance for his next scheduled appearance.

Priscilla’s disappointment was tempered, though, when she received a bouquet of flowers and a note from her idol. In a Dayton Daily News article, Gee Mitchell noted that Elvis' thoughtfulness, “undoubtedly played an important role in Priscilla’s coming through a delicate operation successfully.” She spent that summer at home, but her doctor advised that she not return to school in the fall. Disappointed, Priscilla prepared to take her courses at home with a tutor.

Meanwhile, Elvis had not forgotten his promise to visit Priscilla. Her gloom faded when she learned Elvis wanted to see her when his tour schedule brought him back to Ohio in November. His closest show to Dayton was scheduled for Hobart Arena in Troy, Ohio, on November 24. Arrangements were made for Priscilla and Elvis to meet in his arena dressing room prior to the concert.

On the morning of scheduled meeting, Priscilla and her mother made the 20-mile drive to Troy from their home in Dayton. In his newspaper article the following day, Gee Mitchell described the long anticipated meeting. 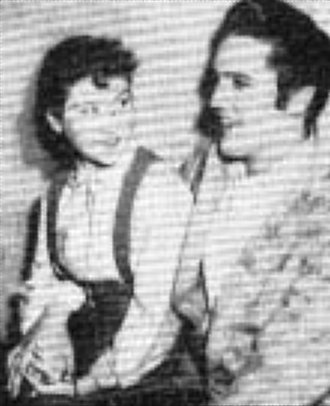 “While some 5,000 others screamed ‘We Want Elvis,’ in the main auditorium, Priscilla and her mother sat in the dressing room and awaited his arrival. Impatient? Sure. But she had been waiting seven months. What was a matter of a half-hour or so more?

“The door a few feet from Priscilla flew open finally and the tall, black-haired young man in a gray plaid sports jacket bounced in. ‘Elvis,’ someone started, ‘this is … ’ 'I know, you’re Priscilla,’ the idol of every bobby soxer broke in. ‘It’s good to see you.’ He said ‘hello’ to Mrs. Meyers then sat down with Priscilla and began chatting as though with a friend of many years.”

“Outside the dressing room the ‘We Want Elvis,’ clamor increased. But those worshippers had to wait awhile for their moment. This one belonged to Priscilla.”

What sentiments passed between Elvis and Priscilla during those brief minutes and to what degree they sustained her in the difficult year to follow remained private. In July 1957, cystic fibrosis and it’s accompanying lung disorders began to ravage Priscilla’s young body. By October she had lost 35 pounds and was in an oxygen tent in critical condition at University Hospital in Columbus.

Bonnie, one of Priscilla’s friends, sent her a card, and when Priscilla’s mother’s thank you note mentioned that her daughter would love to receive more cards, the word was spread through Elvis Presley fan clubs around the country.

Bonnie also sent a letter to Virginia Kay, a 17-year-old high school student with a column in the Pasadena Independent newspaper. In her column of October 31, 1957, Virginia urged readers to send cards to Priscilla for her upcoming 15th birthday. Virginia added, “Letters have been coming in from members of the Elvis Presley Fan Club, also giving us news of the little sick girl, and to assure us that their idol did send a personal message to Priscilla.”

Unfortunately, Priscilla Myers did not survive to reach her 15th birthday. In her November 14 column, Virginia Kay printed the contents of a brief letter she had received.

“Dear Miss Kay: Sorry to inform you, and interested readers, that 14-year-old Priscilla Myers has passed away. For several years she had been in and out of hospitals. One of her greatest sources of pleasure was Elvis Presley and his records. She received a wire and gifts from him. — Mrs. O. E. McKinley, East Lynn, Mass.”

Less than a year before, Elvis Presley had taken the time to make a dream come true for Priscilla Myers. He never received, nor sought, public acknowledgement for the compassion he showed Priscilla and many other young fans who were forced to face difficult trials much too early in life. — Alan Hanson (© April 2019)

Go to Elvis in the News

“Outside the dressing room the ‘We Want Elvis,’ clamor increased. But those worshippers had to wait awhile for their moment. This one belonged to Priscilla.”