"Last Sunday we met you for the first time. Remember Sunday? It was a day of disappointments. The weather was disappointing. Your crowds both at the St. Paul and Minneapolis auditoriums were disappointing (a Twin Cities total of something like 25,000 was expected and the combined total was only about 6,000). And Elvis, we’re sorry to say it, but your act was disappointing."

Disappointment. That was the theme of Bill Diehl’s “Open Letter to Elvis Presley,” which appeared in the St. Paul Dispatch a week after Elvis played both St. Paul and Minneapolis on May 13, 1956. Diehl was the paper’s “Motion Picture Editor.” More excerpts from his letter to Elvis appear below.

It was billed as Elvis Presley’s “first in-person appearance in the Northwest,” when ads heralding the singer’s coming shows began running in Twin Cities newspapers on May 7. Local promoter T. B. Skarning booked the Auditoriums in both cities for Sunday, May 13. Elvis would play St. Paul at 3 p.m. that afternoon, then take his show a few miles westward for an 8 p.m. performance in Minneapolis.

Skarning was expecting a big turnout from Minnesota’s teenagers. In St. Paul he not only booked the 13,000-seat Auditorium, but also lined up the arena’s 3,000-seat theater section as a standby for overflow. If needed the plan was for Presley to shuttle back and forth between the two venues during his show. Tickets in both towns were listed at $1.50, $2.00, and $2.50. Skarning would have to sell about 30,000 of them just to break even after the $15,000 he had to pay out in advance for Presley’s fee and the 10 police bodyguards required by his contract with Colonel Parker. (With only a combined two-city crowd of about 6,000-8,000, Skarning lost his shirt.)

We saw you, talked to you and were impressed by your courtesy and consideration and poise in the dressing room. You were generous with autographs and interviews. Your fingers showed no yellow stains, so we assume the stories about your not smoking are true. Your hair was long, sure, but neatly groomed. Even your fingernails were reasonably clean.

Shortly after the opening acts started at the 3 p.m. St. Paul show, Elvis arrived at the Auditorium. A phalanx of police officers escorted him to his dressing room, where he signed autographs, posed for pictures, and talked with reporters.

In his Minneapolis Tribune review the next day, Will Jones described Presley’s appearance in detail: “He smiled a faint, half sneering kind of smile at times. He didn’t look nearly so tortured or pouty as he does in most published photographs. His brown hair doesn’t appear so dark, either. He has pimples all over the back of his neck, a few on his chin, and a number of nervous facial mannerisms. The most intriguing is the repeated, rapid puffing of a single cheek. His long eyelashes have a Valentino-like mascaraed look … People kept handing him pictures and slips of paper to autograph. His right cheek twitched each time he signed an autograph.”

Among the reporters asking questions was Allen Doerr of the St. Paul Pioneer Press. “Ah’m not worried,” Elvis responded to how long his popularity might last. “There were plenty of good ‘rock and roll’ men before I came along. This is good. I hope it keeps on. Ah’ll keep working as long as it does.”

Jones asked Elvis about his movie plans. That provoked an unusually long response from Elvis. “I was asked to do one of the leading parts in ‘The Rainmaker’ with Burt Lancaster. A young kid, lovesick, real shy. I mean, he wasn’t real shy. Real jolly. Real happy, real jolly, real lovesick. It wasn’t like me. Mr. Wallis asked me what kind of part I’d like, and I told him one more like myself, so I wouldn’t have to do any excess actin’. So he’s havin’ somebody write one for me like that.”

But then, Elvis, we saw your act. And we were, in a word, disappointed. Somebody, probably an adult, has told you to wriggle around when you sing. Your actions, Elvis, were “low.” And you don’t have to be like that, boy. Your records are selling like crazy to kids who have never seen you but who like your singing style … free and uninhibited. On stage, Elvis, you were nothing but a male burlesque dancer. Your gyrations were straight from strip-tease alley. Happily, you did leave your clothes on.

The crowd in the Auditorium chanted, “We want Elvis.” In the dressing room, Elvis put a Kelly green jacket on over his black shirt and pants and, again surrounded by a ring of policemen, headed for the stage. “After the first words of his hit song ‘Heartbreak Hotel,’ the noise of the crowd drowned out the music,” Doerr observed. “Only the beat carried over the loudspeaker system.” One girl shouted to the reporter, “You don’t need to know what he’s saying. It’s just to look at him.”

Doerr described Elvis’ state antics: “Presley grabbed the microphone with both hands and tossed his head. He shook his shoulders in a motion that carried down through his body to his feet. He shuffled stiff-legged from side to side. He leaned his forehead on the microphone, closed his eyes and twitched slowly through his body as he sang.” 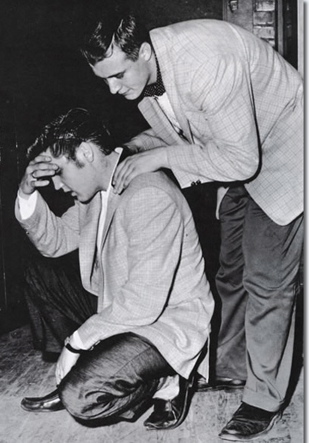 Then, suddenly, Doerr realized Elvis was wounded. “He threw his guitar from side to side and moved jerkily around the stage. The guitar gashed the side of his head and girls in the audience moaned and threw their handkerchiefs to him as blood flowed.”

The show continued. “I love you, baby. I love you, I love you,” screamed a girl in the front row, tears running down her face. “In moments of public passion, he clutched the microphone to his forehead,” noted Jones. “When he wanted silence to announce a number he held up a hand in the traditional platform gesture—but a double-jointed thumb twitched as he held the hand aloft. He ended up limp and sweating and loped off the stage half-staggering.”

"Do you wonder why flops in St. Paul and Minneapolis happened? Oh, they’ll blame the weather and Mother’s Day and anything else. We’ve been asking around, though, and I’ll tell you one big reason: Moms and Dads had seen you on TV and didn’t like your unnecessary bump-and-grind routine. If more Moms and Dads had seen you, I bet not even the scattered 6,000 would have turned up. You disillusioned many of your fans needlessly."

As a mob of girls frantically followed, “police formed a flying wedge to take Presley to a waiting car after the show,” wrote Doerr, “but the crowd broke through. The Kelly green coat was half torn off.” Jones added, “A young, beautiful, well-dressed, highly-made-up blonde tried to get in the car with him. The police barred her. ‘I’m a member of his company!’ she cried. ‘I belong with him! Stupid police!’ Presley got away. The blonde walked around in the rain complaining to bystanders while the rain made a soggy mess of her hair.”

Will Jones’s next day review of Elvis’ show in the Minneapolis Tribune was mild compared to those of many other reporters in 1956, but still Presley loyalists blasted him in letters to the newspaper. On May 18, four days after his review appeared, Jones printed some excerpts from what he labeled, “Twits from the twitchy set.”

“You sure have your nerve tearing Elvis Presley apart in your column,” read one letter, signed by 14 Elvis fans. “Nobody asked you to go to see him. The scum of a crowd always have to open their big mouths, and it seems you belong to this group. You are so low on the scale of humanity it would take a special dispensation from heaven to raise you to even the lowest form of human degradation.”

Another Presley supporter fired away: “As for his dancing, if you could ‘vibrate’ (as you call it) half as well, I’m positive you wouldn’t be sitting on your supposed high horse writing debasive articles about the most popular man with the teen-agers at this time. And I’m sure he’s making quite a bit more money than you are. I could say more, but on paper so I’ll sign off with this. Thousands of kids including me love Elvis Presley, so don’t Step on His Blue Suede Shoes again.”

Why, Elvis, do you resort to your “Pelvis Presley” routine? You’d better drop it before more and more people drop you. Of course, there’ll always be a few crackpots to screech: “Oohhh, Elvis” when you do your hip-wiggle bit. But by now you should know that in show-biz nothing grows in dirt. Clean it up and you’ll really clean up. — Hopefully, Bill Diehl

On May 27, 1956, two weeks after Elvis had left town and one week after his “Open Letter to Elvis Presley” was printed in the Pioneer Press, Bill Diehl addressed the “interesting” mail that his open letter had generated. “Many of the letters come from Presley fans who agree that Elvis had better forget the snake-hipping bit. A few are from parents who jot their concern about the situation. But most of the letters are from Presley boosters who used the foulest, most obscene, dirtiest sex phrases to defend their singing hero. We didn’t even hear Elvis use a ‘darn’ in the dressing room (you see, we still like him—but want him to tidy up his act), but the scrawlers who have risen to his defense resort to phrases I can’t even hint at.”

Diehl then went on to criticize the spelling and grammar in many of the letters he received from young Elvis fans. “When—in a very few years—these ‘cats’ try to make a living, they’ll probably wish they’d studied their spelling instead of Elvis’ midsection,” he declared.

When it came to the subject of Elvis Presley, generational disconnect was never more clearly delineated than it was when columnist Bill Diehl and the singer’s teenage fans clashed in the pages of the St. Paul Pioneer Press in May 1956. — Alan Hanson | © September 2011

"Somebody, probably an adult, has told you to wriggle around when you sing. Your actions, Elvis, were 'low.' And you don’t have to be like that, boy."