Little Rock Writer Had Sensible
Attitude About Elvis in 1956

What would you do if you wanted to find information about Elvis Presley’s appearance in a certain town? Say, for example, you grew up in Little Rock, Arkansas, in the sixties, and you’re interested in knowing what it was like when Elvis played your hometown in 1956. How would you go about it?

Actually, back in 2002 I found myself in a similar situation. I had grown up during the 1960s in Spokane, Washington, and became an Elvis fan in 1963. I knew Elvis had appeared in my hometown in 1957, but, being an eight-year-old at the time, I was much more interested in Mickey Mouse than I was in Elvis Presley. However, at the age of 53 in 2002, I was commissioned to write an article about Elvis for the city’s major newspaper on the anniversary of his death in August.

I decided to write about Elvis’s show in Spokane 45 years earlier. The date—August 30, 1957—was all I knew about it, so to start my research I headed for my local library to view the Spokane newspaper archives for 1957. It was easy to find a news article summarizing Elvis concert in Spokane. Starting about in May 1956, when Presley was first recognized as a national show business prodigy, local newspapers almost always ran lengthy articles about Elvis’s appearance in their cities. There’re easy to find. Just go to the newspaper’s issue the day after Elvis’s concert, and there it is, often on page 1.

The 2002 article about Elvis in Spokane started me on the road to writing a book, Elvis ’57: The Final Fifties Tours, published in 2007. While conducting research for the book, I learned that getting the full picture of Elvis’s appearance in a city required a more thorough search of the newspapers around the time of Elvis’s show. I learned to take the time to look through the microfilm starting about 10 days before Elvis arrived in town until about 10 days after he left.

What was I looking for? First, I scoped the editorial page each day for commentary on Elvis. Then there’s the letters-to-the-editor column, which often produced a treasure trove of information about Elvis. Finally, I checked closely the regular local columns most newspapers ran in those days. Many of these columnists weighed in on the Presley controversy during the days right before or after he appeared in their towns.

Often these columnists were very popular with the papers' readers and occasionally wielded some influence in the community. The best example of that is Dick Williams, a columnist for the Los AngelesMirror-News. After Elvis’s show at the Pan-Pacific Auditorium on October 28, 1957, Williams labeled Presley a “sexhibtionist” in his column the next day and even contended that Elvis had simulated a sex act on stage with a plaster replica of Nipper, the RCA dog. The column caused such anuproar in the community, that the police showed up to film Elvis’s show the next night.

Occasionally, though, a columnist displayed a more balanced, reasonable take on the phenomenon that was Elvis Presley in those early days of his popularity. That brings me back to Elvis’s 1956 appearance in Little Rock. Elvis played in the city the evening of May 16, 1956. A lengthy story reviewing Elvis’s show appeared the next day in the Arkansas Gazette. However, taking the time to review the newspaper’s issues before Elvis arrived in Little Rock, uncovered one of my favorite newspaper columns about Presley. It appeared in Charles Allbright’s regular “Our Town” column in the Gazette.

Allbright obviously didn’t understand Presley’s appeal anymore than the next adult at the time. Still, unlike Williams and his ilk, Allbright took the time to listen to young people in his community and concluded that Elvis was not a threat to them. His column on Elvis, printed in its entirety below, is both enlightening and entertaining.

We may see history made at Our Town tonight. We may witness the last great stand of the Rockers and Rollers.

How can rock and roll ever die, you ask? How can we forget what it has meant, what comfort it has brought? The song may end but the melody will linger on:

“I can look at you and tell you don’t love me no more.

But all things have a way of passing—a fact that is realized by three seniors at Little Rock Central High School.

But it will have a final triumphant hour tonight when Elvis Presley comes to town. There will be those who stand bareheaded (others probably barefooted) as Elvis nears the end of his concert telling plaintively how Long Tall Sally ran up the alley.

To get mentally and emotionally ready for the big event, Music Lover dashed over to interview three Central High coeds—Janice McAtee, Jan Alexander and Lydia Lincoln.

They were informative, good sports and—best of all—extremely kind. They answered crude questions after fumbling inquiry with graciousness. Unfortunately, everybody talked at once and it is difficult now to recall who said what. In the discussion that follows, Janis, Jan and Lydia are referred to only as “Girls.”

Music Lover: Excuse me, Girls, but what does it mean—“One-eyed cat peeping in a seafood store?”

Girls: What do you mean, what does it mean?

Girls: It doesn’t mean anything, it’s just cool, that’s all. You’re not too cool, are you dad?

Music Lover: No, I’m quite comfortable, thanks … Oh, I’m sorry, I suppose I’m not. How about Elvis Presley, is he cool?

Girls: Sure, he has sideburns. Two of them.

Music Lover: Then how about Guy Lombardo and Lawrence Welk? They have two sideburns each, are they cool?

Music Lover: Tell me, has any of you ever stepped on a pair of blue suede shoes, and what was the horrible result?

Music Lover: But in the song it says “whatever you do, do not step on …”

Girls: There you go again dad. Don’t pay any attention to what the song says.

Music Lover: I’m sorry. I notice that none of you is wearing dungarees. Are you not classified as Dongaree Dolls?

Girls: Of course, we’re not wearing dungarees. Nobody wears dungarees, but what can you get to rhyme with Capri pants doll or toreador pants doll. Come alive, dad, you’re being too literal. You’ve got to be open-minded. Take us, we recognize that there is other music besides rock and roll.

Music Lover: Oh? And what would that be?

Music Lover: Good, good. You listen to music, too.

Girls: Sure, we listen to the drums, don’t you?

Music Lover: Well, I will in the future. Will Elvis have drums tonight?

Girls: Who cares? When Elvis sings nothing else counts.

Music Lover: Do all the high school seniors feel this way about rock and roll? Do they consider it the utmost?

Girls: You mean the most. Most of them do than will admit it. In some circles you say you hate it; in others you say you like it.

Music Lover: Then there’ll be some blushing faces in the crowd tonight, won’t there?

Girls: Nothing else counts when Elvis sings. 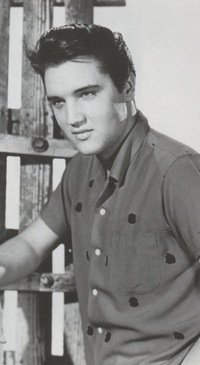 "When Elvis Presley comes to town, there will be those who stand bareheaded (others probably barefooted) as Elvis nears the end of his concert telling plaintively how Long Tall Sally ran up the alley."