While doing research for my book, Elvis ’57: The Final Fifties Tours, I discovered that “letters-to-the-editor” were a valuable source of information about the Presley phenomenon in the fifties. Written mostly by people who had very recently seen Elvis perform on stage or TV, such letters provide significant insight into how the general public, especially teenagers, viewed Elvis and the controversy that followed him everywhere he went. A good example is series of letters that appeared in a Denver newspaper in 1956. First, though, let’s take a look at conditions that motivated readers to send letters about Elvis to their local newspapers back then.

First of all, we all know that Elvis first burst on the national scene as a result of a series of network TV performances early in 1956 on Stage Show, hosted by the Dorsey brothers. However, his notoriety built slowly through the first five months of that year. Although he toured constantly, in the early months of 1956 local newspapers rarely deemed his appearances in their towns worthy of print coverage. In April and May, sporadic reviews of his stage show started to appear in some papers, but usually only in the inside entertainment section. It wasn’t until after his infamous pelvic performance of “Hound Dog” on the Milton Bearle Show in early June that an Elvis appearance became front page news in nearly every community he played from then through the end of 1957.

It’s important to understand that letters-to-the-editor surfaced only after newspapers printed negative reviews of Elvis concerts. Such articles raised the ire of young Presley fans, causing them to do two things they normally didn’t do—read the newspaper and write letters of protest. If local papers didn’t cover Elvis’s appearances in their communities, as they usually didn’t in the early months of 1956, there was no motivation for Elvis fans to send letters to the publisher.

The very first sizable group of letters-to-the-editor about Elvis began to appear in the Rocky Mountain News on April 11, 1956, three days after Elvis played the Denver Coliseum. The letters, and some phone calls, were aimed at Frances Melrose, a News writer, whose regular column usually appeared in the paper’s entertainment section. “Rage Over Elvis Presley Is a Bit Sickening” was the provocative headline above Melrose’s review on page 27 of the April 10, 1956, edition of the Denver paper.

“There’s a new rage of the age—Elvis Presley,” noted Miss Melrose. “As far as I’m concerned I hope this rage passes into oblivion as quickly as it has sprung up.” Several paragraphs later came the passage that undoubtedly sparked a deluge of antagonism toward her from Denver’s Elvis fans. “It’s a toss-up which was worse, Elvis or his fans,” Melrose wrote. “I’d say the edge goes to Elvis.

To criticize Elvis was one thing, but to openly put down his young fans was asking for trouble. Still, Melrose was apparently taken by surprise when her phone in the newsroom began ringing off the hook that very afternoon. Nearly all the callers disagreed with her assessment of Elvis. Most did so politely. However, in her column the next day, Melrose chose to feature an anonymous caller, who commented as follows.

“Miss Melrose? This is one of your fans—only we don’t like you … You’re an old stinkin’ rat! We don’t think you ought to write that way about Elvis Presley.”

It’s understandable that some of Elvis’s teenage fans reacted passionately to Melrose’s criticism of their favorite, but such name-calling only helped to strengthen the conviction of Melrose and other anti-Elvis journalists at the time that Elvis was a harmful influence on teenagers.

On April 13, Melrose printed portions of 21 letters and phone calls as “samples” of those she had received in just the past two days. “The hurricane stirred up by my column on Elvis Presley continues to ricochet around my ears,” she explained. Among the printed messages she had received were many insulting comments aimed at the News writer. Some examples, bad grammar and all, follow.

“You’re just jealous because you can’t wiggle and shake and sing, too, like Elvis?”

“Go soak your head in a pickle barrel!”

“I suppose you’ve never crooned for someone. Well believe me, if you haven’t you’re the squarest.”

“The News could use a new reporter. One who is a little more broadminded.”

“If you had half the talent Elvis Presley has, you might be good enough to shine our shoes. If anybody’s a bit sickening, it’s you.”

“Just because you don’t dig jive and are too old to rock to his music, you have no reason to call him down like that. I think you’re jealous.”

“I’ve never in all my life heard of such a dirty rotten deal for someone so great as Elvis Presley. You are the most selfish and jealous person I’ve ever heard of. Everybody could have did without those lies, but it takes an old rotten bag like you to say something like that. I hope your proud of yourself.”

“We feel sorry for old harpies like you. We sure do … Presley is the greatest ever. Anything you say about him will not turn us against him.”

“You are the bum, not Presley. I bet you are jealous because you can’t sing, shake and look as good as him.”

• “There’s nothing half-way about Elvis Presley.”

A few of the letters Melrose printed were respectful in their disagreement with her opinion about Elvis. A couple were thoughtful in their defense of Presley. There were even a few letters that praised her stand. The majority, though, expressed anger at Melrose. She seemed to take her thrashing with considerably more grace than her young detractors displayed. “And so it went,” she concluded. “There’s nothing half-way about Elvis Presley. You either like him or you hate him.”

Similar scenarios concerning Elvis played out in city after city where he appeared over the next 20 months. That continuing flood of letters stands today as clear evidence of Elvis Presley’s influence on popular culture in the latter half of the 1950s. No other entertainer of that era, or any other before or since, has dominated the letters columns of the country’s newspapers for as long as Elvis did. And Frances Melrose was right about one thing—people then either liked Elvis or they hated him. People either clung to the music and styles of the past or they saw rock ’n’ roll as representing long overdue freedom from conformity. And nowhere was the battle fought more passionately than in the nation’s newspapers in 1956 and 1957. — Alan Hanson | © January 2009

"There’s a new rage of the age—Elvis Presley," noted Miss Melrose. "As far as I’m concerned I hope this rage passes into oblivion as quickly as it has sprung up." 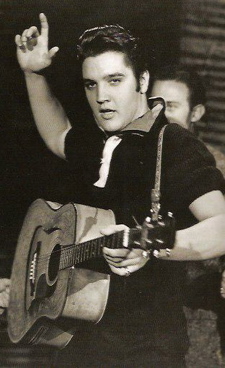