In mid-April 1956, Elvis Presley set out on a personal appearance tour of six Texas towns. Amarillo was the first stop, followed by San Antonio, Corpus Christi, Waco, Fort Worth, and Houston. Elvis’ star was clearly on the rise that spring. Six network TV appearances on Stage Show and one on The Milton Berle Show had thrust him into the national spotlight. When he pulled into Amarillo on April 13, his first RCA single, “Heartbreak Hotel,” was at #8 on the Billboard Hot 100. Presley’s dynamic stage show was now being booked in auditoriums and coliseums instead of clubs and movie theaters, as had been the case a few months before.

Rock ’n’ roll in general was busting out all over the nation. Disc jockey Alan Freed’s recent 10-day stand with a rock ’n’ roll troupe at the Paramount Theatre in Brooklyn took in $204,000, a record take for that house. Promoters, venue owners, and talent managers were ecstatic over the wealth being generated, but in other quarters concern was building over perceived side effects of rock ’n’ roll, such as juvenile delinquency, vulgarity, and immorality.

Although he didn’t see it coming, Elvis Presley, as the industry’s most visible exponent of rock’ n’ roll, would soon become the favorite target of the new craze’s critics. As he arrived in Corpus Christi for a show on Monday, April 16, 1956, Elvis was already being setup as the poster boy for all of rock ’n’ roll’s evils.

Colonel’s Parker first newspaper ad for Elvis’ appearance in the Gulf Coast town appeared in the Corpus Christi Caller on April 11. It announced Elvis’s evening show five days later in the city’s Memorial Coliseum. “The star of stars in the show of shows!” the ad proclaimed. Listed as supporting acts were Wanda Jackson, Hank Locklin, The Farmer Boys, and the Rudy Grayzell Band. Advance tickets ran $1.50. There was no implied danger in the paper’s pre-show announcements. An April 15 article in the Corpus Christi Timeshailed Elvis as “the greatest personality in the last decade of recorded music” and claimed “his versatility makes him one of the few artists whose records are played by hillbilly, pop and blues disc jockeys.”

While teenagers gobbled up the 6,000 available tickets to the show, there was one man in Corpus Christi who was working himself into a panic about the coming event. A few days before Presley’s arrival in town, city building manager Tom Davis grew more apprehensive as he read a front page article in the April 11 issue of Variety. “ROCK ’N’ ROLL B.O. ‘DYNAMITE’’’ screamed the banner headline, with a subhead adding, “Biz Big But So Are Kids’ Riots.”

Davis’ brow no doubt furrowed as he read the article’s opening paragraph:

“Rock ’n’ roll—the most explosive show biz phenomenon of the decade—may be getting too hot to handle. While its money-making potential has made it all but irresistible, its Svengali grip on the teenagers has produced a staggering wave of juvenile violence and mayhem. Rock ’n’ roll is now literal b.o. (box office) dynamite—not only a matter of profit, but a matter for police … On the police blotters, rock ’n’ roll has been writing an unprecedented record. In one locale rock ’n’ roll shows, or disk hops where such tunes have been played, have touched off every type of juvenile delinquency.” 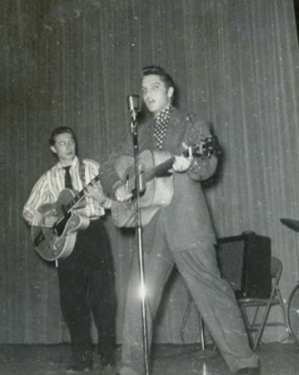 While Davis might have been justly concerned about the immediate crowd reaction at Presley’s show, he must have become even more frightened when he readVariety’s warning of future consequences for any venue that hosted rock ’n’ roll shows:

“Talent agencies are fearful that the effects of rock ’n’ roll may linger around for a long time, even when that kind of entertainment has had its vogue. Agencies believe that the present crop of vauders fear that the association of wild shows may stick with a house, and even should they ever get around to presenting another type of vaudeshow, the connotations of the three R’s—rock ’n’ roll and riots—will still stigmatize the house.” (Photo Credit: Renato Ramirez)

For Tom Davis it was a call to action. Before Elvis Presley even stepped on the stage in Corpus Christi, Davis had a plan in the works to distance the city and its cherished Memorial Coliseum from rock ’n’ roll and its leading practitioner. It was too late to cancel Presley’s April 16 concert, but Davis was determined to blunt the rock ’n’ roll hooligans in the crowd that evening and see to it that Presley and other such acts would never again be welcome in Corpus Christi.

Starting at 8 o’clock on the evening of April 16, 1956, Elvis and his troupe performed before a sold out house in Corpus Christi. (About 1,000 fans were turned away at the door.) The following morning the Caller printed a review of barely 70 words. It acknowledged the largest paid admission total ever at the coliseum and noted that, “A dozen police fought all evening clearing aisles and herding the unruly crowd out of range of the stage … but police kept the youths under control without major mishap.”

Two days later Tom Davis struck. In a lengthy page one Caller article, written by Conrad Casler, Davis apologized for booking Elvis and announced a ban on rock ’n’ roll shows at Memorial Coliseum and other city-owned buildings. Davis provided a list of reasons for his action. He had received complaints from both parents and teenagers that the show was “vulgar.” “What got us was that a fellow on the stage pulled a raw joke,” Davis added, noting that 95% of the audience was teenagers and the rest were parents and children.

Casler reported that the show’s “performers worked themselves and the audience into near frenzy with their savage-like playing. Teenagers jumped to their feet screaming and flailing their arms.” Casler had nothing to say about Presley’s performance in particular (probably because he was not there to see it) but did mention that a San Diego newspaper listed “sensuous gyrations and a savage beat” as elements of Elvis’ style.

Without providing any evidence to support his claim, Davis nevertheless declared Presley’s show, and others like it, a contributing factor to juvenile delinquency. “I do not want the auditorium or coliseum to be used for that sort of thing,” he concluded.

In his article, however, Casler provided evidence that countered every charge Davis had made. Elvis was not responsible for the “raw joke” that Davis had mentioned. That came from The Farmer Boys, a country music duo among the opening acts. Davis admitted that no violence broke out at Presley’s show. “We had no trouble from the crowd at all,” he said. “And there was no damage to the building attributable to the crowd.” Finally, in response to Davis’s claim that Elvis’s show led to juvenile delinquency, Corpus Christi Police Chief Dick Runyan mentioned that he was unaware of any such misbehavior influenced by rock ’n’ roll. Juvenile Judge Paul Martineau added that he had “seen no evidence in Juvenile Court of teenage crime influenced by the craze.”

• Presley faithful come to his defense in letters

As to be expected, Elvis’ fans in Corpus Christi came to his defense. In its April 21 issue, the Caller printed three letters from Presley supporters. “I screamed and clapped and ‘flailed my arms’ as much as anyone, I fancy,” wrote teenager Robert Driscoll. “Most cities have no right to boast about exceptionally well-behaved teenagers. Neither has Corpus Christi, but we were quite a bit less violent than others! And it was not owing to the ‘cordon of police.’ After all, in terms of the old cliché, ‘kids will be kids.’ Would it kill some people’s souls to let us have fun? I’m sure I do not see any wrong in ‘rock-and-roll’ music and rather enjoy bopping to it.”

Another teenager’s letter stated, “Elvis Presley is a good singer who has an ability to sing his songs with a certain rhythm. There is nothing wrong with his songs or the way he sings them. I think Tom Davis is wrong in banning all rock and roll music performers in the Coliseum. I think it has nothing to do with the juvenile delinquency in parts of our country today.”

Finally, an adult reader addressed Tom Davis directly in an open letter. “It was one of the best shows I have ever seen in Corpus Christi. It was about the only show that has really been a success in filling the Coliseum. I think banning rock and roll bookings is the most preposterous thing I have ever heard of. The only vulgar thing in the show was the joke. Let the teenagers have their fad. It seems to me it is better for them to be able to see and hear their idols than to be endangering everyone by racing around town at night.”

On page 1 of its April 25, 1956, issue, Variety ran the following 43-word summary of the Presley situation in Corpus Christi:

“Rock ’n’ roll shows were outlawed in Memorial Coliseum and Exposition Hall. The move came after more than 6,000 teenagers attended the Elvis Presley show at the spot. Tom Davis, building manager, termed the show and others like it a contributing factor to juvenile delinquency.”

Thus, one high-minded civic official in Texas had succeeded, with no evidence whatsoever, in linking Elvis Presley’s name with juvenile delinquency in the entertainment business’s most prestigious national publication.

And in Corpus Christi, Tom Davis held firm on his Elvis Presley ban. When Elvis made another swing through Texas in October 1956, the world’s most famous entertainer was welcomed back by Dallas, Waco, Houston, and San Antonio, but not by Corpus Christi. Both the city’s economy and its teenagers suffered because of one civic official’s sanctimonious stand. — Alan Hanson | © April 2011

Reader Comment: My husband, my sister, her husband, and I were on the front row of the show in question. The jokes were told by the Farmer Bros. Elvis just did what he had been doing. Singing and moving around. There was some loud clapping and such from the audience but no unruly things going on. We enjoyed the show.  He did come back to CC later and played at a dance hall on Ayers St. Don't remember the name, but the 4 of us were there also.  He got a bad rap from the people of CC. — Ila (January 2017)

"One high-minded civic official in Texas had succeeded, with no evidence whatsoever, in linking Elvis Presley’s name with juvenile delinquency."