“All in all, [Elvis on the Hayride] was a big event in several respects and a good time was had by all, maybe Elvis more than anybody else. Whether Shreveport will ever be the same again remains to be seen.”

Thus did Shreveport Times writer Bob Masters close his review of Elvis Presley’s performance on The Louisiana Hayride on December 15, 1956. At the time, Masters didn’t realize the show’s historical significance in Presley’s career. After all, Elvis had come to Shreveport over 40 times before to perform on the Hayride’s Saturday night program on KWKH radio. Nobody knew then that Elvis would never again return to Shreveport, and, in fact, would only perform on stage one more time in the entire South before being drafted into the army 16 months later.

His performance on the Hayride in Shreveport came at the end of an almost continual year of grueling travel for Elvis in 1956. In addition to 8 appearances on the Hayride, Elvis performed 143 concerts in 79 cities in 1956. Add to that 11 network TV appearances, and Elvis was seldom off the road in 1956.

Since Elvis’ career would shift away from personal appearances and toward film work in 1957, his final ’56 show in Shreveport can be seen as ending a phase in his career. Actually, that phase might have ended in Louisville, Kentucky, when his final tour of the year ended there on November 25, but when Colonel Parker bought Presley out of his contract with the Hayride for $10,000 the previous April, the agreement obligated Elvis to appear at a special Hayride charity show in December.

So, on Friday, December 14, 1956, Elvis and three members of his entourage left Memphis for Shreveport, home of the Hayride. Also along on the road trip was director Hal Kanter, who was gathering background for Presley’s upcoming Paramount movie, “Loving You.” The group arrived in Shreveport at five o’clock the following morning and checked into the Captain Shreve Hotel.

• Elvis’ first time back on Hayride since hitting the big time

Shreveport residents first learned Elvis was returning to town in a December 1 article in theShreveport Times. In announcing Presley’s appearance on the 15th, Henry Clay, general manager of station KWKH, revealed the show was being moved from Municipal Auditorium to the Youth Center at the Louisiana State Fairgrounds to accommodate the expected large crowd.

Elvis would receive no fee, as all proceeds from the Hayride show would go to the YMCA expansion project in the Shreveport area. There would be no reserved seating. Tickets, priced at $2 in advance ($2.50 at the door), were available at Security Jewelers, Domestic Appliance Center, Harbuck Sporting Goods, the Southern Maid Donut Company, the Central YMCA, and Stan’s Record Shop.

On December 13, two days before the concert, an unusual article appeared in the Times.Under the headline, “Elvis Will Meet Jap Counterpart,” Hayride director Horace Logan reported that a special telephone had been set up in a room at the Youth Center so that Elvis could speak via trans-oceanic cable with Kazuya Kosaka, a Japanese singer who performed “in the famed Elvis-the-Pelvis style.” The article claimed that Elvis had 15 million fans in Japan. (None of the post-concert reviews indicated whether or not the phone conversation actually took place. The Shreveport Journal, however, did print a photo of Elvis speaking to an unidentified party on the telephone.)

As Elvis grabbed a few hours of sleep in his hotel room early on Saturday morning, groups of teenage girls launched an all-out "Find Elvis" campaign, according to The Shreveport Journal. Oscar Davis, a Colonel Parker assistant, told the paper he didn't know where Elvis was staying but wouldn't be surprised if his fans found him. The teenage set has, said Davis, "a pretty successful synchronized system all its own."

Other fans not looking for Elvis were already lining up for the Hayride show outside the Youth Center for that night’s 8 o’clock performance. Teenager Billie Jean Prescott claimed the first spot in line when she arrived at 7 a.m. Back at the Captain Shreve Hotel, one young fan hit the jackpot. Nine-year-old Phillippa (“Flip”) Unger of Denton, Texas, and her mother had stopped at the hotel for the night on their way home. When they learned Elvis was in town, they decided to stay over and catch his show at the Fairgrounds. “Flip” got more than she expected when she was allowed into Elvis’ room for a “big hug” and an autograph.

In the early evening, Elvis arrived at the Youth Center for his usual pre-concert press conference. “It was a hectic evening for Elvis all around,” Masters reported. “A scheduled press conference more nearly resembled a mob scene, with representatives of the press and radio lost among the throngs of fans, autograph seekers and the curious who infiltrated the meeting.” Perhaps the most meaningful autograph Elvis signed that day was for Mrs. Betty Fields, a polio patient since 1951 at Confederate Memorial Hospital. She had been transported, iron lung and all, to the Youth Center to meet her favorite singer after winning a radio station contest.

“It was a big night for the Shreveport police force, too,” observed Masters. “With teen-agers giving every indication of tearing the Pelvis limb from limb out of sheer admiration and animal spirits, the police threw up more or less effective barricades throughout the building. They were effective enough to keep Presley from being mobbed, but just barely. It required considerable agility to keep up with him as he fled from one room to another—always a step or two ahead of his admirers.” 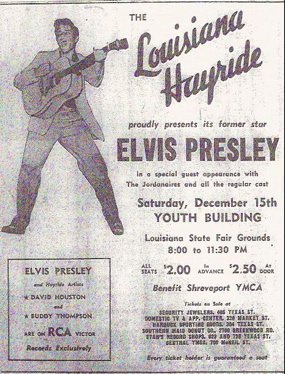 Elvis spoke briefly with fan club presidents Jeanelle Alexander of Shreveport and Kay Wheeler of Dallas. Jeanelle later told Masters that when she met Elvis she experienced “simultaneously the emotions of love, hate, anger, hero worship, anxiety and a few others whose names she didn’t have on the tip of her tongue.” Kay agreed. “I flip every time I meet him,” she said. “He’s the most fascinating human I’ve ever known. Elvis is a living denial of the notion teenagers should be seen and not heard.”

The Shreveport Journal reported that Elvis extended a holiday greeting to local teens during press conference. "Cool Yule and a Fantastic First," he said, adding, "If you know what I mean."

Finally, it was show time for the final time in 1956. Horace Logan introduced Elvis, who came on stage wearing white shoes with blue soles, a green coat, blue pants, and white shirt, tie and silk scarf. “No entertainer in history has worked under greater audience handicaps,” noted Pericles Alexander, Times Amusement Editor. “Elvis’ mere appearance on the ‘Hayride’ stage last night set off a veritable atomic explosion of photographic flash bulbs and squeals from teen-agers which crescendoed into pandemonium. It was beside the point that the gyrating, rotary troubadour was seldom if ever heard by an audience screaming like Zulus every time he moved a muscle. The Pelvis applies more ‘body English’ to a song than many a baseball pitcher and he has more movements than a well-oiled Swiss watch.”

Masters termed the show, “undoubtedly one of the finest displays of mass hysteria in Shreveport history.” He added, “Presumably he sang; you couldn’t hear him over the screams of the frenzied 9,000. But at least his lips were moving, and his pelvis certainly was. He wasn’t halfway through ‘Heartbreak Hotel’ before it became apparent nobody ever had a more appropriate nickname … The motions, gyrations, bumps and grinds, or whatever you want to call them, Elvis goes through wouldn’t be tolerated in most burlesque houses. They do, however, undoubtedly call for considerable acrobatic talent. Probably never before have so many been stirred so much by an acrobat.”

In a December 17 article, The Shreveport Journal compared Presley with three previous teen heartthrobs. "One thing is clear: the youth is a phenomena," observed the Journal. "Roll Crosby, Vallee, Sinatra and all the others into one and they still couldn't get the wild ovation that the 21-year-old Mississippian got. The odd part is that Crosby, Vallee and Sinatra had a definable talent. Presley has none according to accepted standards, but then he may be the prototype of a new form of entertainment. All one can do is hope, of course."

• Elvis spent final days of his break-out year at home

Elvis spent the night in Shreveport before heading home. The Journal described the scene at his hotel. "The rock 'n' roll czar made a fairly quiet departure Sunday afternoon. About half a hundred of his admirers gathered around the Captain Shreve lobby to see their idol depart. Plenty of policemen and hotel officials guarded Presley lest the teen-agers yank him to pieces in their ardor. Presley gave a few autographs, walked out to his white Cadillac and headed out, reportedly for Memphis, Tenn., his hometown."

Elvis spent the holidays with his family in Memphis. On January 6, 1957, he made his final appearance on The Ed Sullivan Show, after which he would not perform on TV again for over three years. Like the performance in Shreveport, it was another step in Elvis’ transition from stage performer to film star. He would spend much of his time during 1957 in Hollywood making movies. It wasn’t until March that year that he again appeared on stage, this time clad in gold lamé in Chicago. Elvis played just 18 cities in 1957, down from 79 the year before.

Most Presley historians overlook the significance of that final appearance in Shreveport. It wasn’t the end of “Elvis the Pelvis,” but it marked the beginning of the end. Bob Masters of the Shreveport Times would never forget it. “Elvis seemed to be glad to perform for nothing,” he noted in his review, “and certainly he didn’t spare the gyrations. For 35 minutes or thereabouts he gave what can certainly be described as an ‘unforgettable’ performance.” — Alan Hanson | © June 2010

“Elvis seemed to be glad to perform for nothing, and certainly he didn’t spare the gyrations. For 35 minutes or thereabouts he gave what can certainly be described as an ‘unforgettable’ performance.”