Elvis played Charleston twice in 1956, first on March 18 and a couple of months later on June 28. Other than a brief announcement of his coming appearance and some newspaper ads, Elvis’ first show in Charleston went unrecorded by the city’s press. By mid-March, his appearances on the Dorsey Brothers’ “Stage Show” had made him a rising star in the entertainment field, but explosive popularity was yet to come. “Heartbreak Hotel” had only been on Billboard’s Top 100 chart for three weeks and wouldn’t reach #1 until May. And so neither the Charleston Evening Post nor The News and Courier chose to review his afternoon and evening shows at County Hall that spring. 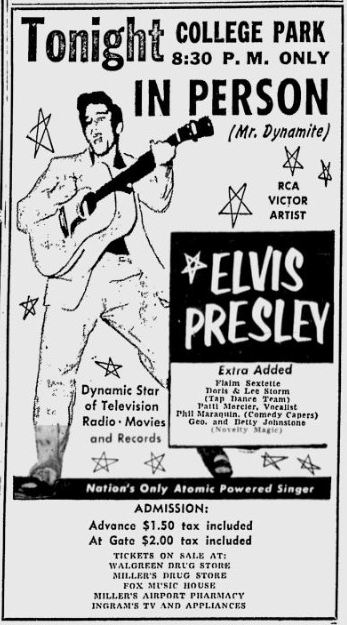 By the time Elvis returned to Charleston in late June, he was the country’s biggest singing sensation. “Heartbreak Hotel” was spending its seventh consecutive week at #1 on the Top 100, and his grinding version of “Hound Dog” on “The Milton Berle Show” earlier that month had drawn wide-spread criticism in the national press. On June 28, 1956, he was booked into College Park baseball field in Charleston for one show at 8:30 p.m. Ticket prices had jumped modestly to $1.50 in advance and $2 at the gate. In addition to the two drug stores, advance tickets were available at Fox Music House, Miller’s Airport Pharmacy, and Ingram’s TV and Appliances.

In “Keeping Posted,” his Charleston Evening Post column, Basil Hall predicted Elvis would skip town “just as soon as he gets all the young folk hereabouts broken out in a real cool rash.” He added that he’d been promised 15 minutes of Presley's "precious time before the curtain rises on Elvis tonight at College Park. Ol’ Swivel Hips doesn’t know anything about that, though, and he may be moody. I don’t think I could stomach that.” Judy Rhodes, a college intern at the Post, volunteered to help Hall with the interview. “I finally told her yesterday she could go,” Hall noted, “and she’s been squealing ever since.”

Of course, when he showed up at College Park that night, Hall discovered that what he thought was going to be a private interview turned out to be a press conference. “I told you I’d try to find out what makes this boy tick,” he reminded his readers in his column the next day. “Well, to sum it up, I’d say money.”

“He claims he doesn’t know what his take-home pay is, but I have my doubts. It’s enough, anyway, to satisfy some pretty ridiculous whims—and he gave the impression that he’s being smart enough to put some aside for the day when, to some, he’ll be just a distasteful memory … Matter of fact, he’s pretty much a country kid who manages to keep a sharp eye on the dollar bills he missed so much when he was younger.”

Hall shared other tid-bits of information he learned about Elvis. He never thought about going to college. (“I was short of cash, and probably would not have passed if I’d gone.”) The writer was not surprised that Elvis neither drinks nor smokes. “With this boy’s energy, he just doesn’t need any stimulants.” Elvis said he was waiting out the draft, but Hall thought it a shame Elvis wasn’t already in the army. “A GI haircut would improve the fellow immeasurably.” Elvis claimed the sideburns and the clothes he wore were just part of an act to please his fans. “At heart, he says, he’s conservative. But it’s hard to believe," the columnist declared.

As for Presley’s stage act, Hall thought it was just that, an act.

“He doesn’t even pretend to be a good singer, but he thinks his sense of rhythm has the appeal that’s put him on top. As for his gyrations that have caused most adverse criticism, Elvis says they’re the evidence that he ‘feels’ the rhythm he’s trying to put across. That’s another thing I doubt. I think it’s all a part of the act that’s put his show on the road.”

As for Judy Rhodes, Hall says he let the “starry-eyed college girl” throw questions at Elvis for him. Both of them came away thinking Elvis was a pretty hot item. “She’d like to see him a little more often,” Hall noted. “I’d just like to be his manager for 30 days. I’d retire!”

Over at The News and Courier, Betty Wilkirson got the assignment to cover Elvis. After the press conference, she provided details of Presley’s appearance that Hall failed to report. “Attired in a mandarin-collared grey silk shirt, high-waisted grey trousers, Presley signed autographs with hands that bore two diamond rings—one a horseshoe of stones.” 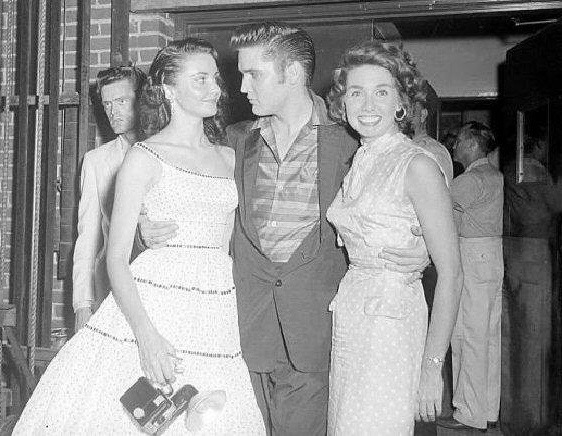 Both Hall and Wilkirson stuck around to see Presley’s show on the baseball field. Hall estimated the crowd at “close to 3,000,” while Wilkerson judged it to be a “screaming, howling 4,000.” Elvis “packed the park,” she noted. “Two hours before curtain, teenagers were lined a half block both ways from the park entrance waiting for tickets. Some impatient ones climbed the wall.”

When Elvis came on stage, Hall noted, “Sinatra NEVER had it so good! The Old Groaner couldn’t have stood the mass adulation. But Elvis, the Pelvis—MAN! You ever see a ball park jump? Well, I did. If squeals, shouts, moans and sighs are any indication, Elvis was a tremendous hit. Nobody fainted—they didn’t want to miss the show.”

Seeing what she considered a pseudo-burlesque show on stage, Wilkirson opened her review next morning in The News and Courier with a bizarre comparison between a stripper’s G-string and Presley’s guitar strings.

“Many a burlesque routine has been built around a G-string—even as that given at College Park last night by Elvis Presley. But a G-string that breaks? For ‘Mr. Dynamite’ of the rock ’n’ roll idiom, the current teenage thrill who has the adult world in a slow burn, a broken G-string is nothing. ‘I break two or three strings at each performance,’ he said. It’s part of his savage guitar approach—a sort of music-in-the-raw that is his trademark. That and the bumps and grinds usually reserved for the burlesque houses.”

The Courier ran a series of photos showing Elvis “suffering” on stage and the girls in the audience screaming for more. A couple of 12-year-old (at the most) girls put their hands over their mouths, apparently a bit embarrassed by what they were seeing.

In the end, Elvis’s Charleston appearance replicated that in many other Southern communities in the summer of 1956—except for a famous bite. On June 30, a day after Elvis left town, Betty Wilkirson accused him of biting her hand. Apparently, when she approached his car after the show to take a picture, a playful Elvis stuck his head out of the window and chomped on her hand. The story went out on the Associated Press wire and landed in dozens of newspapers across the country.

Betty: “Hey, you, what’s the idea? You trying to make like Marlon Brando or something?”

Elvis: “I was only being friendly, like a little puppy dog.”

Betty: “Well, it’s the first time anyone ever bit me to show friendliness.”

Elvis: “Lady, if you want to get ahead, you gotta be different.”

A minor wound it must have been, since two days later Wilkirson was showing off the abrasion and basking in the national spotlight that had shone upon her.

“Overnight, or over a bite, you might say, the hand that’s been punching out copy for the unconcerned becomes celebrated as the hand that was bitten by Elvis Presley … As a newshen gnawed by the nation’s top hound dog singer, I’ve been advised variously to sue for assault, take a rabies shot, inquire whether he brushes after every meal, offer my paw to the museum. Yep, folks have really showed concern.”

Like in many communities across the country in 1956, in the wake of Elvis Presley’s passage through, some Charleston citizens dueled over his impact in the letters-to-the-editor column of the city’s newspapers. It started with an “anti-Elvis” tirade in The News and Courier on July 3, 1956.

“It probably will require a hurricane to de-contaminate this area properly after the appearance here of Elvis (What-is-it) Presley … I know hundreds, and there must be thousands, who deplore the type of so-called music that is being fed to the younger elements of our community. Let us hope that those who feel as the writer does will make themselves heard so that something may be done to curb the mouthings of that avaricious maniac.” — W. A. Morris

Such a self-righteous rant by an adult guaranteed letters in response from Elvis’s youthful followers. For example, the following letter appeared in the same newspaper four days later.

“Every time I look around I find the same old song and dance coming from the older members of this miserable race. ‘Those kids shouldn’t do that. That music they listen to is making delinquents out of them. Elvis should be locked up.’

“Personally, I resent the ‘shouldn’t do that’ attitude of many guardians and reformers who want to straighten out the younger generation. I am a young person and don’t doubt that I need a great deal of correcting, but when we stop listening to Elvis, stop reading comics, stop doing this, and stop doing that, what are we going to do then? In short, what have you older folks provided for us in the way of wholesome entertainment? Until you older folks can provide something in this line, I would appreciate it if you leave our literature, music, and Elvis alone.”— Harry Chinnis

The debate over Elvis in the press died out that summer in 1956. Charleston’s citizens would never again have cause to weigh the impact of an Elvis Presley appearance in their city because he never came back. Oddly, although Presley later performed in dozens of communities across the nation in the 1970s, after June 28, 1956, he never again set foot on a stage in Charleston. — Alan Hanson | © June 2017

"Overnight, or over a bite, you might say, the hand that’s been punching out copy for the unconcerned becomes celebrated as the hand that was bitten by Elvis Presley."