Elvis in December—Elvis hardly ever worked during the final month of the year. Wherever his work found him, whether it was in Hollywood, in Las Vegas, or on the road somewhere, he almost always came home to Memphis for the holidays. He loved to decorate Graceland for his fans to see, and at Christmas time he gave generously to many of his hometown charities. We know that, regardless of the season, he loved to give gifts to his family and friends, but that was especially so at Christmas time. Elvis’ most important career event in December was the airing of his “Comeback Special” on NBC-TV in 1968. In his personal life, two important events occurred during December—the issuing of his draft notice in 1957 and his marriage proposal to Priscilla in 1966. 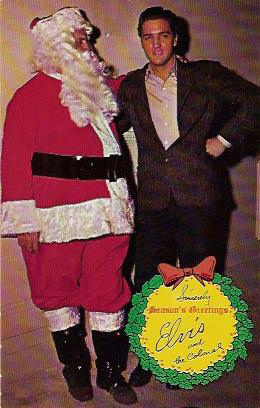 • Elvis in December: A list of important events that occurred in December during the life and career of Elvis Presley

December 19, 1962 — Priscilla arrived at Graceland for a Christmas visit.

• Elvis in December: Anecdote #1
Question on Elvis a hot potato for Minnesota governor in 1956

On December 11, 1956, Elvis’ first movie, Love Me Tender, was in its third week in Minneapolis theaters. That morning the Minneapolis Morning Tribune ran a front-page story on how the state’s governor, O. A. Freeman, answered a question posed by 11-year-old Linda Johnson. “I would like to have your personal opinion of Elvis Presley,” Linda wrote the governor. “I love him.”

According to the Tribune, Freeman “straddled the fence on a burning national issue.” His return letter to Linda read, in part, “I’ve been so busy with my duties here and my reelection campaign (a successful one) that I had never seen Mr. Presley until his recent appearance on the Ed Sullivan program. He is certainly a very unusual showman and apparently appeals to many people.”

Tribune reporter Ed Goodpaster, who wrote the paper’s story about the correspondence between the young girl and the governor, closed his article with the following observation.

“Freeman, no stranger to political differences of mind, realized that this, however, was a different situation. As one of his assistants put it: ‘Political infighting hath no fury like a Presley fan whose blue suedes have been stepped on.’”

Elvis in December: Anecdote #2
What we missed out on when the army took Elvis away in 1958

The facts are these: Elvis picked up his draft notice at the offices of the Memphis draft board on December 20, 1957. He requested and received a 60-day deferment to complete work on Paramount’s King Creole and then was inducted into the army on March 24, 1958.

Naturally, all of Elvis’ entertainment commitments for the rest of 1958 had to be cancelled. But what were those commitments? What would he have done if Uncle Sam hadn’t called him so suddenly? Those questions were answered in a Christmas Day 1957 Variety article, headlined, “Presley’s Draft Will Cost Him 450G.”

“Elvis Presley will lose a minimum of $450,000 in firm picture commitments for 1958 as a result of his draft call,” the Variety article began. It pointed out that Elvis’ draft call would force him out of his contract with 20th Century Fox to do a movie in 1958. Elvis was to receive a flat $200,000 for that film, which would have been a bargain for the studio since the contract had been signed in 1956 before Elvis’ movie price soared. (Elvis fulfilled his obligation to 20th Century Fox with Flaming Star in 1960.)

Elvis was also signed to do another film for MGM, which would have been his third movie of 1958. According to Variety, MGM planned to cast Elvis in a “biopic of the late hillbilly howler Hank Williams, for which he was to receive $250,000 in cash plus 50% of the profits.” (Elvis would not do another movie for MGM until 1962, when he appeared in It Happened At the World’s Fair.)

In addition to the two film projects, Elvis’ army service also cancelled out his scheduled personal appearances for 1958. (It would be interesting to know what cities lost their Elvis concerts that year because of the army.) Of course, Elvis’ recording sales for RCA were scaled back for two years due to his military service. Between cancelled motion pictures, lost concert ticket sales, and reduced record sales, Elvis’ draft call conservatively cost him $1 million in income during 1958 alone.

• Elvis in December: Birthdays of Prominent People in Elvis’ World

• Elvis in December: A December quote from Elvis Presley

“I don’t know what all the fuss is about. I’m just a guy who makes music—no different from anybody else … this country has given to me. And now I’m ready to return a little. It’s the only adult way to look at it.” — on receiving his draft notice, Memphis Press-Scimitar; December 21, 1957

A compilation of important dates, events, birthdays, and anecdotes from the month of December during the life and career of Elvis Presley