Elvis in February—During his career, Elvis was involved in a variety of activities during the second month of the year. Starting in 1970, he played a Las Vegas engagement nearly every February for the rest of his life. As the list below indicates, some of his most well-known songs were recorded during February. Of course, starting in 1968, every February he celebrated one of the most important events of his life—the birth of his daughter, Lisa Marie. 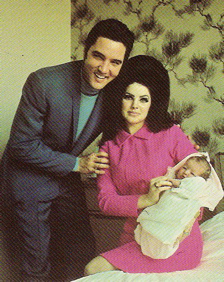 • Elvis in February: A list of important events that occurred in February during the life and career of Elvis Presley

February 11, 1956 — Elvis made his third appearance on “Stage Show,” hosted by the Dorsey brothers. Elvis sang his new record, “Heartbreak Hotel,” for the first time on national TV, along with “Blue Suede Shoes.”

February 24, 1957 — Elvis recorded “Loving You” at Radio Recorders in Hollywood.

February 1, 1958 — Elvis recorded “Wear My Ring Around Your Neck” at Radio Recorders in Hollywood.

February 3, 1959 —Buddy Holly, Ritchie Valens, and the Big Bopper died in a plane crash near Clear Lake, Iowa. Elvis learned of the deaths two days later at his army posting in Germany.

February 11, 1960 — Elvis was promoted to sergeant, the highest rank he would attain in the army.

February 25, 1961 — Elvis performed two charity shows at Ellis Auditorium in Memphis. They were his next to last live appearances until to his return to the stage in Las Vegas over eight years later.

February 24, 1965 — Elvis began the soundtrack recording session for Harum Scarum at RCA’s Studio B in Nashville.

February 27, 1970 — Elvis performed live at the Houston Astrodome. It was his first road show since his 1961 concert in Honolulu.

“Memphis’ Elvis Outdoes Caruso in Record Sales” was the headline of an article in the Memphis Commercial Appeal on February 6, 1957. The article reminded readers that the concept of “golden disks” began when operatic star Enrico Caruso’s recording of “Vesta la giubba” was the first to sell more than a million copies. Caruso later received another “golden disk” for “O sole mio,” a tune from which Elvis’s 1960 gold record “It’s Now or Never” was adapted.

It also noted, however, that Elvis was still a long way away from topping the all-time top-selling single. That was Tommy Dorsey’s “Boogie Woogie,” which sold 4,500,000 copies back in 1938.

The newspaper also reported that Elvis had been chosen by Photoplay magazine as a recipient of its “Stars of 1957” award. Photoplay’s award banquet was broadcast live by NBC-TV from the Beverly Hills Hotel the evening of February 7, 1957. On hand were other award winners, among them Rock Hudson and Kim Novak. Elvis, who was filming Loving You in Hollywood at the time, did not attend the banquet.

Elvis in February: Anecdote #2
February Was "Elvis Month" at the International Hotel

When Elvis returned to live performing starting in 1969, February was one of the two months (August was the other) each year that found him on stage in Las Vegas at the International Hotel (later the Hilton). Variety covered nearly all of his Vegas appearances through the years. On February 3, 1971, the show biz magazine reviewed Elvis’s fourth engagement at the International.

“All the principal arteries leading into and around Vegas are dotted with ‘Elvis’ billboards,” Variety noted. “Bus benches everywhere contain the same message and radio is busily putting out the word many times an hour. This, a favorite Col. Tom Parker promo, will continue throughout the month as the Presley mystique continues to grow and grow in this aleatory sand pit.”

The reviewer declared that Elvis came on even stronger than in his three previous sold-out engagements. “The programming is better with amounts of the goodies along the past years spaced out well, interspliced with contemp fare and—stroke of master planner—a couple of his gospel hits. Amazingly, his trump tune brings down the curtain with a roaring surge of applause … after more than an hour of belting and much physical exertion, that wins the surprise sweepstakes of the year for a Vegas performer.”

The writer was particularly impressed by Elvis’ ability to integrate karate moves into his act. “Presley has also designed his karate chops for better frequency, so that when he does give the moves, the effect is dynamite in topping off a rhythm tune.”

Of Elvis’ customary stage-side kisses, Variety noted, “The usual ringside tour in ‘Love Me Tender,’ with the bussing of femmes, is also gotten out of the way early in order that the principal game be played to enthrall the greater majority of votaries.”

Variety’s entire review of Elvis’ show was over-the-top positive, concluding with, “The entire scheme this trip is a model of the most highly effective showmanship touches, blended with very good sounds.”

• Elvis in February: Birthdays of Prominent People in Elvis’ World

February 11 — Hank Garland, the guitarist who played prominently on such Elvis recordings as “A Fool Such As I” and “I Need Your Love Tonight,” was born in 1930. He died December 27, 2004.

February 12 — Steve Sholes, the RCA Victor executive who negotiated Elvis’s first contract with RCA, was born in 1911. He died in 1968.

• Elvis in February: A February quote from Elvis Presley

“It’s kind of funny. You go out with a girl a couple of times and it’s a big romance, you know. They had me married a couple of times. I was down on Wilshire Boulevard one night. I was in a lobby of a theatre. Some people said, ‘I thought you were in Mexico City on your honeymoon.’ I came to find out that it was in a Mexican paper that I’d eloped and was coming there to get married, and they had a hotel suite reserved and all that stuff. I didn’t even know the girl I was supposed to be married to.” — February 25, 1961, press conference at the Claridge Hotel, Memphis.

A compilation of important dates, events, birthdays, and anecdotes from the month of February during the life and career of Elvis Presley