Elvis in January—it was often a "going-back-to-work" month for him following spending the holidays at home in Memphis. As you'll notice on the list below, Elvis recorded some of his biggest hit records during January. Also, it was a big month for his live TV performances in 1956, 1957, and 1973. Finally, Elvis started work on two of his movies during the first month of the year. 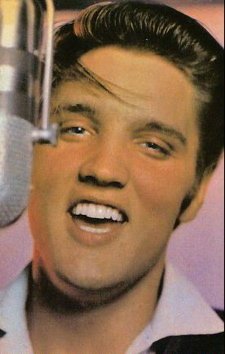 • Elvis in January: A list of important events that occurred in January during the life and career of Elvis Presley

January 28, 1956 — Elvis made his first national TV appearance on “Stage Show,” hosted by Jimmy and Tommy Dorsey in New York City. Elvis sang “Shake, Rattle, and Roll” and “I Got a Woman.”

January 6, 1957 — Elvis appeared for the final time on “The Ed Sullivan Show.” Elvis sang “Peace in the Valley” on the program.

January 12, 1957 — Elvis recorded “All Shook Up” at Radio Recorders in Hollywood.

January 13, 1969 — Elvis started his 11-day recording session at American Studios in Memphis. Among the hit records recorded during the sessions were “In the Ghetto” and “Suspicious Minds.”

January 16, 1971 — At age 36, Elvis was honored by the Junior Chamber of Commerce of America as one of the “Ten Outstanding Young Men of the Year” at an awards ceremony in Memphis.

• Elvis in January: Anecdote #1
How “The Mystery of the Broken Elvis Records” was solved in 1957

On January 5, 1957, Billboard magazine reported on a mysterious case of damaged Elvis records. Larry Kanaga, then vice-president and general manager of RCA’s Record Division, heard the true story at a convention of record distributors in Indianapolis.

It seems that a supermarket manager called up the local RCA record jobber and complained that all the Elvis Presley 78’s he had on display were broken. The jobber couldn’t understand it, but he replaced the broken records in the supermarket. Several days later, however, the manager called back again with the same complaint. All the replacement records were broken.

The jobber replaced the Presley records again, but this time he made the delivery himself, inspecting each disk as it put it on the supermarket rack. Then, positioning himself in a spot where he could observe the rack unnoticed, the RCA rep sat down and waited.

He didn’t have to wait long. Soon he spotted a little old lady with a cane walking down an aisle toward the record rack. She walked up to the Presley display, and, after taking a look around, raised her cane and gave the records a couple of whacks.

The mystery was solved, but Billboard made no mention of what, if any, action was taken against the old lady for her act of vandalism. Perhaps an appropriate punishment in this case would have been being forced to sit and listen to Elvis’ records for several hours.

Elvis Presley’s career has always been defined by numbers—big numbers. In a January 15, 1964, article, Variety used some big numbers to assess Elvis’ career to that point. The article opened with the following paragraph.

“His imminent professional demise having been forecast annually since his dynamic arrival on the show biz scene in 1956, Elvis Presley heads into 1964 as easily the most robust corpse extant, his estimated gross income to date a lively $20,000,000.”

Variety then went out to reveal one big Presley number after another. According to RCA Victor figures released the week before, Elvis’ single record sales during his eight years with the company totaled 49,300,000. He also had sold 11 million LPs and 12 million EPs. The 15 movies in which he had appeared from 1956-1963 had brought in an estimated $75 million in box office receipts. Colonel Parker told Variety that Elvis had taken in $1.5 million in straight salary for his two 1963 films, It Happened At the World’s Fair and Fun in Acapulco, with 50% of the profits still to come on top of that.

So where did all that movie money go? Parker explained that the William Morris agency skimmed 10% off the top, with Elvis getting 75% and the Colonel 25% of what was left. Answering criticism that his share was too large, the Colonel explained that at least half of what he received from Elvis was put right back into the business, for such things as office expenses, advertising, and promotion. Elvis’ cut, according to Parker, went “straight to the Memphis accountants.”

The Colonel also explained that he had turned down all TV offers, which ranged up to $150,000, and personal appearances, estimated at $75-100,000 per week, because he said Elvis didn’t have the time to do them.

• Elvis in January: Birthdates of Prominent People in Elvis’s World

January 5 — Sam Phillips, owner of the Memphis Recording Studio and Sun Records, where Elvis first recorded professionally, was born in 1923. He died on July 30, 2003.

January 8 — Elvis Presley was born in Tupelo, Mississippi, in 1935.

January 14 — Clint Reno, Elvis’ character in Love Me Tender, was born in 1843. (So read his tombstone in the movie’s final scene.)

• Elvis in January: A January quote from Elvis Presley

“I would give my neck to be back home. I am homesick all the time … I’m happy to do my part in the Army, but you’ll never know how much I want to get back home … back to the entertainment business one way or another the rest of my life … whether playing or as a stagehand. You will never know how wonderful old Memphis is until you’ve been away for a while.” — during a telephone interview while in Germany, January 3, 1959

A compilation of important dates, events, birthdays, and anecdotes from the month of January during the life and career of Elvis Presley