Elvis in May—Undoubtedly, the most important event in Elvis' life during May was his marriage to Priscilla on May 1, 1967. During his career, however, May was a month of varied activity. Some years May found him in Hollywood shooting a movie to be released during the holiday season at year's end. Films he worked on during the month of May include Jailhouse Rock (1957), Blue Hawaii (1961), Roustabout (1964), and Live a Little, Love a Little (1968). When Elvis was not working in Hollywood during May, the month was usually a spring vacation period for him. It might find him resting in Hawaii, in Palm Springs, or at Graceland. If Elvis was at home during May, it was not unusual for him to spend some time in the recording studio during the month. During the early concert years of the 1970s, Elvis always took the month of May off. However, starting in 1973, Elvis worked on the road every May until the end of his life. 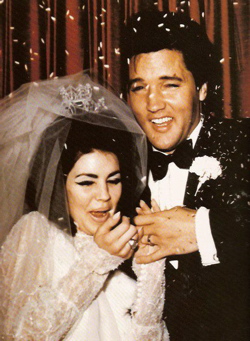 • Elvis in May: A list of important events that occurred in May during the life and career of Elvis Presley

May 1, 1967 —Elvis and Priscilla were married at the Aladdin Hotel in Las Vegas.

• Elvis in May: Anecdote #1
It Was All About Big Numbers With Elvis on the Road in May 1975

Back in the 1950s, some cities were so afraid of the damage (both physical and emotionally) that Elvis Presley would do that they refused to let him perform in their communities. Montreal in 1957 is just one example. Other cities begrudgingly let Elvis use their public auditoriums but banned him from ever returning after seeing what they considered his vulgar acts on stage.

When he went back on the road in the 1970s, however, Elvis was welcomed by the city fathers wherever he went. The reason? An Elvis appearance was guaranteed to rain money on the community. A couple of good examples of this phenomenon appeared in the May 7, 1975, issue of Variety.

The first one gave the financial details of Elvis’ 1975 show in Macon, Georgia. “After making 10,242 of his Georgia fans happy,” noted Variety, “Elvis Presley left Macon about $85,000 richer from his sellout concert April 24 at the Coliseum.” The arena manager reported that Elvis’ share of the $96,000 receipts was $81,000. To that was added about $4,000 in the sale of Elvis souvenirs. In addition to the Coliseum’s $15,000 fee, Macon retailers and hoteliers profited nicely from Elvis coming to town.

A separate article in the same May issue of Variety indicated officials in Charleston, West Virginia, were already counting the loot that would flow into the city and state coffers when Elvis appeared in their town on July 11 and 12. Charleston’s Civic Center Manager announced ticket sales for Elvis’s three shows, all of which sold out hours after they went on sale, totaled $243,000. After taxes and fees, Elvis’ cut would be in the neighborhood of $205,000.

Elvis in May: Anecdote #2
Elvis Music Was in Big Demand in Russia During Cold War

Elvis Presley had been in the army barely two months, but the U.S. government already had plans to use their new private’s music to help ease the Cold War. In May 1958, the State Department was lining up program content for a negotiated radio broadcast exchange with the Soviet Union. In a May 26, 1958, article, Billboard reported that Presley’s music was being considered for some of the 16 programs the State Department had to provide the Soviets under the agreement signed in January.

Elvis’s music was certainly in demand behind the Iron Curtain. RCA Victor Vice President George R. Marek testified at a Senate hearing that “Russians are so wild for the big beat they pay up to $100 for bootleg recordings, snagged from taped Voice of America programs."

In his popular book, Inside Russia, author John Gunther reported that bootleg Elvis records, recorded on old X-ray plates, were selling for fantastic prices in the U.S.S.R. At the same time, the Soviet government was portraying Elvis Presley as an example of America’s decadent culture. So it was unclear, despite his popularity among Russian teenagers (or perhaps because of it), if the Reds would accept Elvis’ participation in the broadcast exchange. For that matter, the U.S. State Department was probably no more eager to hold Elvis up as a shining example of America’s superior culture. With Elvis in the army, though, his bad-boy reputation began to soften quickly on both sides of the Iron Curtain.

• Elvis in May: Birthdays of Prominent People in Elvis’s World

May 13 — Memphis disc jockey Dewey Phillips, who is credited with being the first DJ to play an Elvis record on the radio, was born in 1926. He died on September 28, 1968.

• Elvis in May: A May quote from Elvis Presley

“Rock and roll has been in for about five years. I’m not gonna sit here and say that it’s gonna last because I don’t know. But all I can say is that it’s good, the people like it, it’s sellin’ … It might change. Like years ago when the Charleston was real popular, or the vaudeville acts, stuff like that. You could’a told those people maybe it was gonna die out and they wouldn’t’ve believed you. But it’s dead now, see. And maybe four or five years from now, well, rock and roll will be dead. As far as rock and roll goes, I really like it. I enjoy doin’ it, and the people have really accepted it great and it just makes me wanna knock myself out to keep givin’ ’em somethin’ that they enjoy.” — radio interview, Little Rock, Arkansas: May 16, 1956

A compilation of important dates, events, birthdays, and anecdotes from the month of May during the life and career of Elvis Presley