“So Elvis Presley came, strumming a weird guitar and wagging his tail across the continent, ripping off fame and fortune as he scrunged his way. And, like a latter-day Johnny Appleseed, sewing seeds of a new rhythm and style in the white souls of the white youth of America, whose inner hunger and need was no longer satisfied with the antiseptic white shoes and whiter songs of Pat Boone. ‘You can do anything,’ sang Elvis to Pat Boone’s white shoes, ‘but don’t ya step on my blue suede shoes.’”
— Eldridge Cleaver, Soul on Ice, 1968.

Like the Black Panther leader of the riotous sixties, many Americans then and since have associated Blue Suede Shoes and its rebellious message with Elvis Presley. The truth is, of course, the song was written by Presley’s Sun Records stablemate Carl Perkins, who had a hit record with the tune in 1956. Elvis’s version of Blue Suede Shoes was never a chart hit, and yet, in the public’s perception, Presley has somehow co-opted cultural ownership of the classic song. A review of the song’s history reveals how it happened. 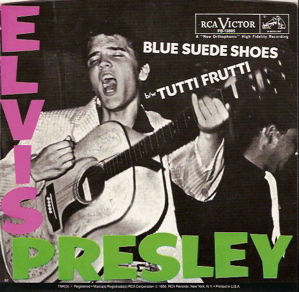 While details of how and when Blue Suede Shoes was written vary, all parties agree that Johnny Cash gave Perkins the basic idea for the song. In a 1988 interview in England, Cash explained how the image came to him and how he passed it on to Carl.

“I was in the Air Force in Germany, and I had a black friend named C.V. White from Virginia. He’d get dressed up for a three-day pass, and in his mind, when he put on his clothes to go out, his black shoes were blue suede shoes. He would say, ‘Man! Don’t step on my blue suede shoes; I’m goin’ out tonight.’ Carl Perkins and I were in Amory, Mississippi, with Elvis. Now Elvis, of course, was hotter than a pistol … and Carl hadn’t had a hit. He’d had two country records. He asked me to write a song with him. I said, ‘You take this idea and write it yourself.’ This ‘blue suede shoes’ line that my buddy used to say had been in my mind ever since I went to Sun. I told Carl about it and he said, ‘That’s the one I’m looking for,’ and he wrote it that night. He started it backstage, but he went home and finished it.”

Cash said he never regretted giving the “blue suede shoes” concept to Carl. “I’m still glad I did, because he was my best friend, and he deserved a hit. He’d worked hard for one.” 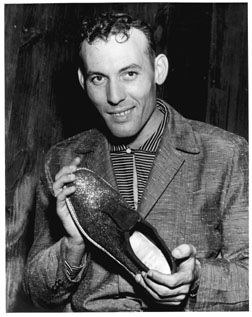 However, in his 1996 autobiography, Go, Cat, Go, Perkins claimed he initially shrugged off Cash’s idea. “I don’t know nothin’ about them shoes,” Carl told Johnny. Perkins claims that it wasn’t until a later appearance at a Jackson nightclub that he first saw the potential for the term in a song. After finishing a number, he heard a boy near the stage forcefully telling his date, “Don’t step on my suedes!” Perkins thought, “A pretty little thing like that and all he can think about is his blue suede shoes.” Later that night, Perkins wrote Blue Suede Shoes. It came to him quickly. It felt like “a song writing itself,” he said later.

On December 19, 1955, Carl Perkins recorded Blue Suede Shoes at Sam Phillips’ studio in Memphis. According to Go, Cat, Go, “The first take was tentative, stiff … His initial guitar solo was tepid and sloppy; he was searching for some fire but managing only faint sparks.” On the second take, “Carl [cut] loose on his vocal, singing with an easy but driving swing in his voice, and an ingratiating ebullience. The lyrics were tighter, the instrumentalists better locked into each other, and the feel was fresh and lively.” After a mediocre third take, Sam came out of the control booth. Shocked, Carl said, “Mr. Phillips, I made some bad guitar mistakes in there.” Sam played back the second take. “You just listen to this break,” he said. “Do you hear that? You burnt it! We’re not changin’ anything—this record’s a smash!”

Sun Records #234 was released on January 1, 1956. Demand for Blue Suede Shoes was slow at first. It got some traction on Country & Western stations in some Southern cities, but Perkins began to despair of the record getting any national attention. However, on February 18, 1956, Billboard magazine listed Blue Suede Shoes at the top of it’s C&W “This Week’s Best Buys” column. “Difficult as the country field is for a newcomer to ‘crack’ these days,” the review began, “Perkins has come up with some wax here that has hit the national retail chart in almost record time. New Orleans, Memphis, Nashville, Richmond, Durham and other areas report it a leading seller. Interestingly enough, the disk has a large measure of appeal for pop and r.&b. customers.”

Interestingly enough, also, was that further down in that same column was a review of another Billboard “Best Buy”—Heartbreak Hotel by Elvis Presley. Over the next three months, Perkins’s Blue Suede Shoes and Presley’s Heartbreak Hotel faced off in match race to the top of Billboard’s charts. It started in the C&W sector. By April 7, both records were at the top of all three country charts, trading places in the #1 spots from week to week. On April 28, though, Presley got the upper hand. Heartbreak Hotel held the top spot on all the C&W charts for three weeks with Blue Suede Shoes in the runner-up spot all the while.

The two records also had a race to the top of the Hot 100. Both entered Billboard’s top pop chart on March 3, 1956, with Heartbreak Hotel at #68 and Blue Suede Shoes at #83. The very next week, however, Perkins’s record leaped up to #23, five spots ahead of Presley. Both recordings reached the top 10 on March 31, when they tied for the #9 spot. Then, slowly, Heartbreak Hotel inched ahead, reaching #1 on May 5, while Blue Suede Shoes spent six weeks vacillating between #4 and #5. In the end, Elvis’ first RCA record spent seven weeks at #1. Carl Perkins’ first entry in the Top 100 was a smash hit as well. Blue Suede Shoes spent 21 weeks on the chart, nine of them in the top ten. 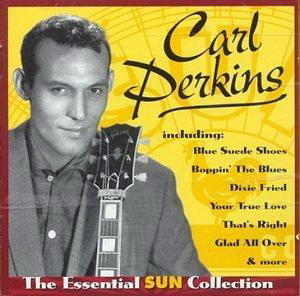 Meanwhile, Elvis Presley had recorded his own version of Blue Suede Shoes at RCA’s New York studios on January 30, 1956. The main goal of that session was to produce some tracks to fill Presley’s first album. Sam Phillips claims that RCA’s Steve Sholes promised not to release Elvis’s cover of Blue Suede Shoes as a single while Carl Perkins’s record was still hot on the charts.

According to Scotty Moore, Elvis recorded the song because of his personal friendship with Carl Perkins. “It’s been claimed that RCA and Colonel Parker were trying to get Elvis to do the song,” said Scotty, “but he did it more as a tribute thing than anything else. He had been talking to the band about it, and then he just decided he wanted to do it.”

Presley gave Blue Suede Shoes the full rock ’n’ roll treatment, at a faster pace and with greater energy than Perkins’s rockabilly recording. Go, Cat, Go noted that, “The beauty of Presley’s unrestrained performance on ‘Shoes’—he eliminated the stop-time break and instead tore through the opening, barely taking a breath—was a link to the Sun style. As they had when working with Phillips, Moore, Bill Black, and Presley’s new drummer, D.J. Fontana, set up and blew, according to Moore: ‘We just went in there and started playing, just winged it. Just following however Elvis felt.’”

• Elvis was hesitant and stiff at session

However, according to Ernst Jorgensen’s book on Presley’s recording sessions, recording Blue Suede Shoes was far more problematic than a handful of musicians “winging it.” Jorgensen contends that Elvis was unsure of how to approach the song in the studio. “There was a hesitation and stiffness in Elvis’ voice in the ten takes it took to produce a cover of Carl Perkins’s ‘Blue Suede Shoes;’” observed Jorgensen, “maybe Elvis felt uncomfortable ‘stealing’ a former stablemate’s song, or maybe he was taken aback by the unspoken, but perfectly understood, doubt in the air about his own potential … That didn’t make Elvis’ version of ‘Blue Suede Shoes’ a failure, though it did set it apart from what had come before; energy and toughness were starting to replace the natural swing and underplayed charm of both Presley’s Sun sides and Perkins’s original.” 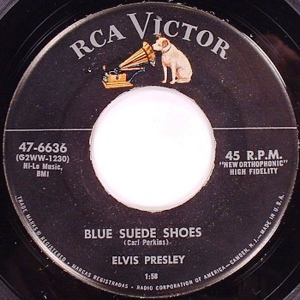 While Blue Suede Shoes was not a chart hit for Elvis in 1956, he made it a standard offering of his in other media. On television he sang the Perkins tune on CBS’s “Stage Show” on February 11 and again on March 17. He followed it up with a raucous version on “The Milton Berle Show” on April 3. As part of his screen test on April 1, Presley lip-synced Blue Suede Shoes for the Paramount Studio camera. Of course, Blue Suede Shoes was a staple in Presley’s live stage shows in 1956, including during his two-week run in Las Vegas beginning on April 23.

Elvis continued his association with Blue Suede Shoes in later stages of his career. A toned down version appeared in the film G.I. Blues in 1960. When he returned to live performing starting in 1969, he often included Blue Suede Shoes in the playlist, sometimes as his opening number. Of course, Elvis’ original recording of Blue Suede Shoes was included in dozens of RCA record and CD releases through the years. And in 1985, eight years after Elvis’s death, RCA produced a music video featuring his 1956 version of Blue Suede Shoes. Carl Perkins made a cameo appearance in the video.

• Perkins got his due respect for Blue Suede Shoes

Although Carl Perkins has remained in the blue suede shoes shadow of Elvis Presley through the years, he has received his due credit for composing one of the most influential songs of the past century. Blue Suede Shoes was named one of the Rock and Roll Hall of Fame’s 500 “Songs That Shaped Rock and Roll.” Perkins’s recording was inducted into the Grammy Hall of Fame in 1986 and in 2006 was inducted into the National Recording Preservation Board in the Library of Congress National Recording Registry. On Rolling Stone’s 2004 list of “The 500 Greatest Songs of All Time,” Perkins’s version of Blue Suede Shoes was listed at #95. Elvis’ recording of the same song ranked #423 on the list. Finally, in 1999 National Public Radio included Blue Suede Shoes on its list of the 100 most important American musical works of the 20th Century. Carl Perkins died in 1998. — Alan Hanson | © March 2011