When Charro! began arriving in big city theaters in the late summer of 1969, it seemed to be just what Elvis fans like me had always hoped for. Billed as a straight dramatic Western, without comedy and Elvis vocals, it presented Presley with a long denied opportunity to display his talent as a serious actor. However, after viewing the movie at a Seattle theater in October 1969, I came away with a couple of painful realizations. First, the acting talent I was so sure was in Elvis didn’t come out in this movie, and maybe, perish the thought, it didn’t exist at all anymore. Second, I had to face the truth that the ingredient that had ultimately made Elvis movies entertaining for me was Elvis’ singing. With that missing, so was the appeal of Charro! 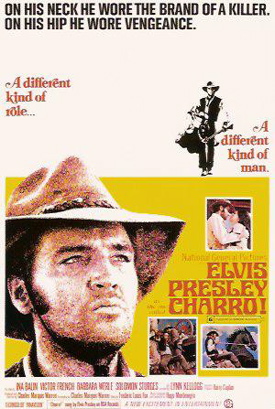 Besides being the only Presley picture in which the star didn’t sing after the opening credits, Charro! offered several other firsts in Elvis’ Hollywood career. It was his first and only movie produced by National General Pictures, which became the sixth Hollywood studio to turn out at least one Elvis movie. The studio’s marketing of the film was another unique feature. It opened March 12, 1969, in a “pre-release” 300-theater saturation booking in the Southwestern states before being released to the rest of the country later in the year. Then, of course, it was the only time Presley sported facial hair on screen.

Elvis’ chance to showcase his acting ability in Charro! was undercut to some extent by a dull and sluggish script. The picture was written, produced, and directed, by Charles Marquis Warren, who drew deserved criticism in Variety’s review of March 12, 1969. “Presley strolls through a tedious role that would have driven many another actor up the wall,” noted the reviewer. “Even more at fault than Presley, who has occasionally responded in the past to the demands of a good director, is Charles Marquis Warren, who takes credit (or blame?) for the script, the direction and even part of the production.”

Open to debate is the extent to which Presley’s impassive portrayal of gunslinger Jess Wade was the actor’s own interpretation or the director’s. Certainly, Elvis shows little emotion in the role, especially compared to the fiery depiction of Vince, his nemesis, played by Victor French. Presley spends much of his time staring menacingly at various characters. These prolonged, concentrated looks are a bit hard to take seriously by long-time Elvis moviegoers, like me. I half expected each Elvis’ stare to dissolve into a big, lip-curving smile, as happened so often in most Presley movies of the previous half dozen years.

When the script does allow Elvis to speak, his dialogue is riddled with such hackneyed lines such as, “My name’s Wade. Jess Wade. Mean anything to you?” or “Do you go to sleep, or do I put you to sleep?” Then there’s his challenge to Vince—“Just make a move. That’s all I ask, just make a move.”

An obvious attempt to make Elvis’ character look menacing, the unkempt beard was offset by Presley’s laid back portrayal, as noted by Roger Greenspun in his New York Times review of September 4, 1969. “His mouth hidden behind the mask of a stubble-like beard, his hair powerfully slicked into place, his walk modest and his manner retiring. Presley appears thoroughly tamed.”

• Was Elvis embarrassed about his role in Charro!?

Greenspun further judged that Elvis had underplayed his role. “He treats his part rather as a minor embarrassment,” Greenspun wrote, “and he seems determined not to push himself in a role that could have used a stronger personality to fill the lapses in the story and the wide open spaces in the dialogue.” Greenspun, however, also blamed Warren’s script for not giving Elvis’ character more depth. “Of course Presley saves the town. The issue was never in doubt, and not even the rudiments of conflict or of suppressed loyalties exist within the central character.” 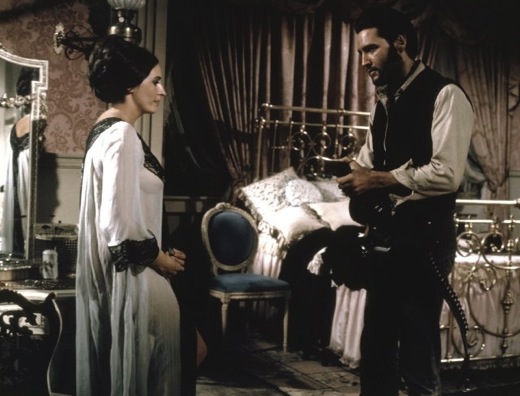 While Elvis does not sing in the film, other than the title song, music plays a significant role in Charro! Hugo Montenegro’s score, gives a “spaghetti western” feel to the movie. Music serves throughout to heighten tension (sometimes when no apparent tension exists in the story), to fill gaps in the dialogue, or to herald romantic feelings when Ina Balin comes on the scene. Variety noted that “Hugo Montenegro’s score is pleasing and [the] title tune has already given Presley a popular single via RCA Victor. (Of course, by Presley standards, the record was not a hit.)

Variety passed out limited credit to the supporting cast as follows:

“The closest thing to impressive acting in the film is contributed by Victor French as the gang’s leader (and he’s a bit trying at times). Ina Balin, as Presley’s dance hall hostess girl friend, and Lynn Kellogg, as one of her girls, provide the pulchritude (a shot of Miss Balin in a clingy gown right after her bath is a small touch of sex). Solomon Sturges, as the hysterical younger brother of French, and James Almanzar, as the town sheriff, are the only supporting members who have a chance to leave an impression, plus Barbara Werle as Almanzar’s wife.”

• Presley should have played the bad guy’s part

As for French’s character, Greenspun in the Times went even further, contending that it was French, and not Presley, who had the meaningful role in Charro!. Greenspun explained, “So far as it belongs to anybody, ’Charro’ really belongs to Presley’s enemy, the gang leader Vince,” who follows in the interesting recent tradition of mature, sober-sided outlaws … Although he brands Presley with a red-hot poker, it is Vince who bears the real scar: a gun-happy kid brother to whom he remains loyal even to the boy’s death and his own undoing. Victor French is capable of his role’s subdued expressions, and he carries the weight of his familial curse with a measure of settled determination that suggests the authority the code of the West might have in telling us how to act, what face to show to our miseries.”

Of course, Greenspun’s observation begs the question: Would Elvis have been better served in the more challenging role of the volatile Vince rather than the unruffled Wade? Perhaps, though, National felt it was already asking a lot for Elvis’ loyal audience to accept him in any non-musical role, much less that of a villain. In the end, Charro! was a flawed vehicle for Elvis Presley’s return to serious acting work. It lacked the compelling action and drama that marks most successful Westerns. Elvis would have one more try at dramatic acting in Change of Habit later in 1969, before forever abandoning the screen for the concert stage. — Alan Hanson | © September 2008

"While Elvis does not sing in the film, other than the title song, music plays a significant role in Charro! Hugo Montenegro’s score, gives a 'spaghetti western' feel to the movie."