When Easy Come, Easy Go came to my local theater during spring break of 1967, I was only a few months away from high school graduation. While other concerns, most notably the draft and college, were competing for my attention at the time, my loyalty to Elvis was still strong, and so I drove my first car, a ’53 Chevy, downtown one afternoon to see Elvis’ latest movie. I was neither disappointed nor especially delighted with what I saw. Except for a new slant in the storyline, Easy Come, Easy Go differed little from Presley’s films of the previous two years. But there was Elvis to see and a handful of new songs to hear, and that was good enough for me in those days. 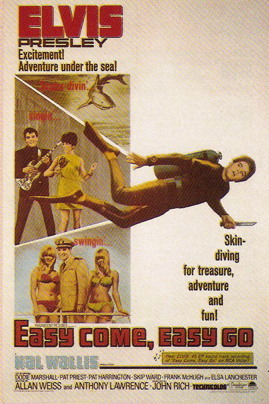 I did notice some new twists in this Presley feature, however. As a Navy frogman, Elvis was serving in his third different branch of the armed forces. (He was previously in the Army in G.I. Blues and in the Air Force in Kissin’ Cousins.) Then, despite all the gorgeous girls frolicking around him, Elvis’ character was actually more money-hungry than girl-crazy this time around. Finally, although this was Presley’s ninth picture for Hal Wallis, it lacked the colorful scenery and wall-to-wall Elvis vocals that spiced up the producer’s previous Presley films.

Although I thought Easy Come, Easy Go a rather lackluster effort, Variety’s reviewer (identified only as “Murf.”) amazingly gave it one of the paper’s most positive reviews of a Presley movie in years. The review started out as follows:

Variety also commended Elvis’ appearance in the movie. “Somewhat slimmer here than in recent pix, Elvis looks great and ageless,” observed “Murf.” To my eye, though, Elvis still seemed a little hefty in Easy Come, Easy Go, especially compared to either his athletic physique of only a couple of years earlier or the Greek God appearance he would feature on stage two years later. In this film, after Elvis is discharged from the Navy, he looks much better in civilian clothes the rest of the way. It was certainly no coincidence that director John Rich dressed the star in black civies, as such attire produced a slimming effect through the eye of the camera.

• Picture’s Two Themes Got in Each Other’s Way

The movie’s title foretells the sluggish movement of its narrative. The leisurely pace is a result of the story’s two thematic strands, which never successfully merge with each other. On one hand, there is the adventure story of a lost treasure chest in a sunken ship and the race to recover it. This runs concurrently throughout the film with what is clearly intended to be a spoof on the counter culture of the mid-sixties. There’s the yoga scene; the “Happening” of drenching an embracing couple in spaghetti; a couple of modern art sequences; and wall signs featuring such heavy thoughts as, “Conserve Water, Shower Together,” and “Narcissism—the Only Ism for Me.” The spoofing interrupts and slows down the treasure hunt action throughout. Nothing slows down the film as much, however, as the two lengthy underwater sequences, especially since the viewer knows that’s not really Elvis in the black scuba outfit. 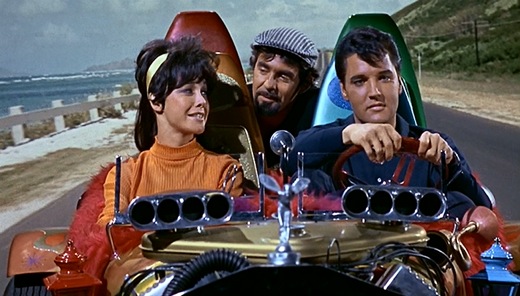 As for the music, you have to go back five years to 1962’s Kid Galahad to find an Elvis movie as short on tunes as Easy Come, Easy Go. Aside from the goofy “Yoga Is As Yoga Does” duet with Elsa Lanchester, Elvis’ vocals here are the mellow sounds typically found in his films of the late 1960s. Only the uptempo “You Gotta Stop” has an edge to it. Varietynoted the six songs were “easy on the ears, scored well by Joseph J. Lilley and choreographed in effective and deceptive simplicity by David Winters.” Commercially, the movie’s soundtrack recording was a flop. Released in “extended play” format, the six-tune package proved to be the worst selling non-Christmas record in Elvis’ career to that point. It never made the charts and sold only about 30,000 copies.

Variety’s reviewer handed out almost universal praise to Presley’s co-stars. As a nightclub owner, Pat Harrington “comes across very well as a bearded beatnik type,” according to Variety, and Dodie Marshall, who emerges as Elvis’ love interest at the very end of the film, is called “an excellent young actress with appealing warmth and looks for meatier sympathetic roles.” The heavies were assessed as follows: “Pat Priest (excellent also as the out-for-kicks, hardened rich dame) and her current beach-bum tag-along, Skip Ward (a bit stiff in some sequences, but overall okay for the part).”

Variety continued, “Frank McHugh has some good satirical scenes as the bathtub sailor … Elsa Lanchester shines in her bit as the kooky yoga instructor, and Diki Lerner sticks out as an effete artist with a flair for turning automobiles into mobiles. Rest of cast is good.”

As mentioned, Easy Come, Easy Go is no better nor worse than the dozen or so Elvis movies that preceded it. Still, it suffered artistically and commercially as the latest in a long-line of uninspired Presley features. Despite that, however, take a look at the following, frankly, astonishing general assessment of Elvis’ movies in Variety’s review of Easy Come, Easy Go.

“The word ‘formula’ is too negative if applied to Elvis pix, although, to be sure, a given story line is simple, admitting of tune inserts, and assured of happy resolution. Anyone who has seen similar films recognizes the superior quality of Presley films: the story makes sense; the songs are better, and better motivated; cast and direction are stronger; production values are firstrate. A generation from now, Elvis pix will be film festival items, just as the Busby Berkely, Astaire-Rogers and Mae West pix are now.”

• Was Elvis Losing the Magic Touch?

Of course, Elvis film festivals do pop up occasionally on cable TV channels, but rarely is Easy Come, Easy Go considered worthy enough to be included. In fact, in its own time it finished down the list at #50 on Variety’s Big Rental Pictures of 1967. Grossing just $1.95 million, it caused Hollywood execs to begin wondering if Presley’s magical power to deliver at the box office was finally beginning to fade. Perhaps Elvis was starting to wonder the same thing. — Alan Hanson | © August 2008

"Easy Come, Easy Go is no better nor worse than the dozen or so Elvis movies that preceded it. Still, it suffered artistically and commercially as the latest in a long-line of uninspired Presley features."