It’s Time to Reflect on a
Elvis-History-Blog Milestone

I hope you’ll forgive me if this week I take the spotlight off of Elvis Presley and shine it on myself just for this once. You see, this is my 200th weekly blog on elvis-history-blog.com, and I feel the need to stop and reflect on what has passed here and what the future holds for this Elvis blog. (I’m even going to feature pictures of myself instead of Elvis.)

My first entry, titled “It’s Getting Harder and Harder to Find the ‘Real’ Elvis Presley,” was posted Thursday, March 13, 2008. Phil Arnold, the “Big Daddy” of all Elvis bloggers, soon contacted me to offer some pointers about Elvis blogging. The most important advice he gave was this: “Tell your readers when you’ll be blogging, and then deliver on time every week.” Only once in nearly four years have I failed to post a blog on a Thursday. That was in the summer of 2010, when my wife and I spent two weeks in England. Even then I scheduled our trip so that we left and returned home on a Thursday, so that I would miss only one blog. 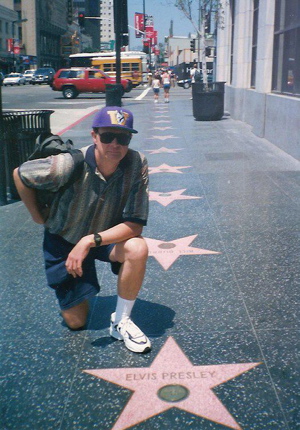 With Elvis’ star on the Hollywood Walk of Fame, June 1999

Another piece of advice Phil gave me was to limit my blog entries to no more than 1,000 words. More than that would turn off fans, who look to blogs for quick Elvis fixes, Phil explained. At first I tried to keep to the thousand-word limit, but often found the story took me several hundred words beyond that threshold. On average my Elvis blogs have run about 1,200 to 1,300 words each. Over the run of 200 entries, then, I’ve posted about 225,000 words on Elvis-related topics in this space. And that’s not even counting the 34 Elvis movie reviews and many other pages on elvis-history-blog.com that did not originate as blogs.

• From Elvis “muckraker” to story-teller

Four years ago I would never have believed it possible to find 200 Elvis topics to blog about. At the start, I committed myself to three years of postings, but I sailed right past that marker in March 2011. And I can honestly say that so far I’ve never had difficulty coming up with an Elvis blog topic.

One major change along the way, however, has been my blogging philosophy. At the onset, I fancied myself an Elvis investigative reporter. I was going to tell the “truth” about Elvis, and expose the myths and legends perpetuated by the misguided Presley faithful who had deified their infallible idol. As the weeks and months passed, though, I found myself becoming less of a “muckraker” and more of an Elvis storyteller, a chronicler of the Presley phenomenon through the years. There were so many interesting episodes in Elvis’ life, especially in the 1950s, that had never been told, and I enjoyed detailing them in this space.

Oh, I did tackle a few of the myths. One that always rankled me was that Colonel Parker was to blame for every misstep in Elvis’s career. So in five blogs (#10, #12, #68, #138, #195), I’ve taken up the sword in the Colonel’s defense and insisted that Elvis be given both the credit and the blame for the various directions his career took. (For those interested, these blogs and others enumerated below can be accessed through the links at the end of this blog.)

Another Elvis myth I tried to debunk was the preposterous notion that over one billion people worldwide tuned into his 1973 “Aloha” TV special (#137). How any reasonable person could believe that one-third of the world’s population even had access to television sets back then, much less that they were all watching Elvis at the same time, is beyond me. However, that particular myth has become ingrained in popular culture and is still routinely repeated by respectable media sources.

I’ve discovered that rather than beat my head against a brick wall trying to expose Elvis myths, it’s more enjoyable to look back on and share some of my own experiences as an Elvis fan. Some examples are what it was like to be an Elvis fan in the mid-sixties (#30), watching Elvis’s “Comeback Special” in 1968 (#41), seeing Elvis live for the first time in 1970 (#148), and listening to The Elvis Presley Story on the radio in 1971 (#121). 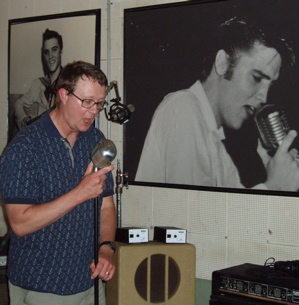 In the end, though, my favorite part of Elvis blogging has not been the content of the entries, but instead how they have allowed me to interact with other members of Elvis’ world—both insiders and fellow fans. For instance, after I posted a blog about “Alan,” the pioneering Elvis Tribute Artist (#105), he got in touch with me and shared some interesting information about his career. Then there was Billy Garland, the brother of Hank Garland, who played lead guitar on such Presley recordings as “A Fool Such As I” and “A Big Hunk O’ Love.” After he contacted me, we had a long phone conversation, during which he repeated his belief that the 1961 auto accident that robbed Hank of his ability to play the guitar professionally was actually an attempted murder!

And then there’s the ever gracious Jordanaire, Gordon Stoker, who was a major source for my Elvis ’57 book in 2007. Whenever I have asked his help over the past four years, he has courteously obliged, despite recurring health problems. Elvis Presley has never had a great defender over the decades than Gordon Stoker.

Many Elvis fans have contacted me through the “Comment” link at the bottom of this blog page. Two Australian Elvis fans, Bob Hayden (#101) and Eugene Sheviakoff (#108-109, #132) became good friends. Eugene, who emailed me weekly for a year, was a guest blogger on elvis-history-blog.com for two weeks in April 2010. My saddest moment as an Elvis blogger came a few months later, when Eugene’s daughter informed me that her father had passed away unexpectedly.

Among my most enjoyable experiences associated with this blog are when Elvis fans take the time to share their personal Elvis stories with me. Just last week, for example, after reading my past blog about Elvis’ 1956 special Las Vegas show for teenagers (#176), Arletta emailed me her following remembrances of that day:

As a teen I lived in Henderson, Nevada, and I went with some other girls to see Elvis Presley’s show in Las Vegas in 1956. He did a good show, and some of us girls screamed and cried. After the show, some of us went up to his room and knocked on the door. He came to the door himself. He asked our names and signed the playbills they had given us with his picture on it. I was watching him as he signed the other girls’ papers, and there was a white glow around him. He was standing in the doorway, and the energy off his body was really strong. It could have been the lights behind him, but it was something to see. Elvis had a sadness to him that touched me at the time.

The girls and I ran downstairs to the pool lower level where you could look up and see people dive in the water. Later, when we went back up the stairs to the pool level, I felt someone watching me. I stopped and looked to the right; there was Elvis leaning forward with his elbows on his knees, watching me. To his right was a heavyset lady sitting in a chair next to him. He was so kind and respectful to her, though she was not a girl he would be with.

So what does the future hold for elvis-history-blog.com? Surely the day will come eventually when I’ll have to admit to myself that I have nothing more to say about Elvis, but I don’t think that day will come soon. There are still many stories to tell about Elvis, especially from that magical year of 1956, when wonder and excitement accompanied him wherever he went. I’m always open to suggestions for blog topics, and I’m especially hopeful that many of you will continue to use the “Comment” link to share your Elvis stories with me. | Alan Hanson (January 2012)