It’s Time for This Collector
To Unload His Elvis Treasures

"I have a lighter that is extremely old that has Elvis on the front with the GI Blues symbol and his signature on the back. Can you tell me what it is worth? It still works too. It is a refillable lighter."

Although I have rarely mentioned Elvis collectibles in the four-year lifespan of elvis-history-blog.com, questions like the one above are the most common form of feedback I get from the site. Readers with Elvis items want to know what they’re worth and how to sell them. Here are a few more examples:

"I have an unused Arizona Memorial Benefit by Elvis ticket that I bought in 1961. Unable to use because my ship had to leave port early headed for Vietnam. What is it worth? It is in perfect condition."

"I have owned a belt buckle for about 25 to 30 years. On the buckle it states Sun Records, Good Rockin' Tonight, Roy Brown, ELVIS PRESLEY, Scotty and Bill, #210. I'm trying to find out how to authenticate it and sell it."

"I have a pic of Elvis and dj Dewey Phillips with a 29-cent stamp on it and a few other pics of Elvis and Graceland. What I was wondering was how much are these worth." 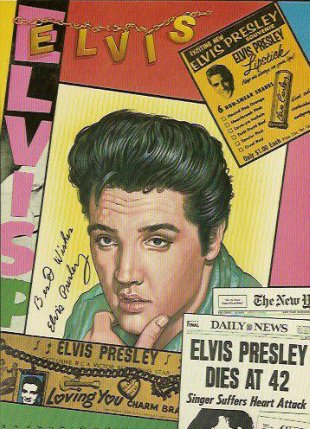 In replying to all such questions I admit knowing next to nothing about Elvis collectibles and how to market them. I usually suggest the owner post the item on an auction site, like eBay, and see what bids it draws. Even then, unless the item is rare, old and in good condition, it’s doubtful in will attract much attention. Now, I know there is an active market for Elvis concert tickets, especially early ones, so the 1961 Hawaii benefit ticket might draw some interest. I doubt, however, if a used Elvis cigarette lighter would create much excitement in an auction.

The basic dynamic of the Elvis collectibles market these days is that sellers far out-number buyers. Recently, when I did an eBay search for “Elvis collectibles,” up came 6,097 hits. Included just on the first of 122 pages of items were Elvis guitar picks, coins, mugs, watches, cards, badges, wallets, busts, plates, pins, stickers, license plates, thimbles, cigar bands, coasters, and salt and pepper shakers. A search for “Elvis records” brought up an incredible 17,078 items, spanning 341 eBay pages. It appears as if about 80% of all the collectibles and records listed had attracted no bids.

• Hanson had the Elvis collectors’ bug

Full disclosure demands that I admit to being an unabashed Elvis collector for much of my life. My collecting instincts surfaced early in life. As a boy I amassed boxes full of bottle caps, coins, and baseball cards. Then, after becoming an Elvis fan in 1962 at the age of 13, I turned my collecting fervor on Presley items. Initially, the picture sleeves for his 45s fascinated me, so they became the focus of my early Elvis collection. I bought those available in my local record store archives, traded for others with my friends, and even fished a “Love Me Tender” sleeve out of a trash can in the alley behind a juke box distributorship in town.

During the ’60s, I anxiously awaited and purchased every Elvis record—single, extended play, or LP—as it was issued. It never occurred to me at the time to buy multiple copies of each, especially of the 45s. Now I wish I had. Today, in mint condition, Presley’s original singles in picture sleeves from that era can bring a lot of money from collectors. Other than the records, there seemed little Elvis-related stuff to collect during the movie years. There were some free promotional photos and calendar cards the record stores put on their counters. Again, I wish I’d grabbed a stack of each instead of just one.

Of course, a big wave of Elvis collectibles hit the market soon after August 16, 1977, as the wheels of capitalism ground exceedingly fast to capitalize on Presley’s death. Dozens of books and tribute magazines suddenly appeared on the supermarket racks, and though I bought a copy of them all, I read very few of them. One I did read, however, was Elvis: What Happened?, which first allowed me to start viewing Elvis not only as an entertainer but also as a historical figure in American popular culture.

• “Treacher’s” was a candy store for Elvis fans

Elvis’ records, however, were still the focus of my collecting mania. Somehow I learned about a Vancouver, B.C., record store named “Treacher’s” that specialized in Elvis records from around the world. I made several trips there in the late ’70s and brought back dozens of Elvis 45s and LPs, almost all of which I never played or even opened. A trip to the UK in 1980 added a few more pounds of vinyl to my collection.

And then in the ’80s came the flood of Presley bootlegs. Since they contained Elvis music unavailable on RCA issues, I had to have those illegal pressings. Every Saturday afternoon, I checked out a used record store in town to see which new Elvis boots had arrived. All were added to my collection of Presley records, which eventually ran into the hundreds.

As I entered my fifties toward the end of the ’90s, however, I resolved to fight the collecting virus that had infected me for so long. My basement was full of boxes, not only of Elvis stuff I never looked at, but other collectibles as well. Like most chronic collectors, I had accumulated meaningless stuff from a wide array of themes, not just Elvis. For the most part, I was able to honor my resolve to stop accumulating, but it wasn’t until recently that I finally gave into the inevitability of parting with my Elvis collection. Two factors triggered the decision—first, the realization that “you can’t take it with you,” and, second, my wife’s insistence that I get rid of all that “junk.”

• It hurts to say goodbye to my Elvis collection

For about five years now, I’ve slowly been disposing of my Elvis “junk” on eBay. It’s been unpleasant seeing it go, as the items never sell for as much as they should, considering how valuable they were to me. But time has dictated that those of us who were Elvis Presley fans in our youth are of an age when “downsizing” is a necessity. The occasional questions about Elvis collectibles that I receive from readers of this blog attest to that on a small scale just as the thousands of Elvis items listed on eBay confirm it on a much larger scale. — Alan Hanson | © January 2012

"Initially, the picture sleeves for his 45s fascinated me, so they became the focus of my early Elvis collection."