December 3rd is the anniversary of Elvis’ 1968 television special, now commonly known as his “Comeback” special. There is no doubt that it was an extraordinary landmark in his career, as well as a joyous event for all of us who were Elvis fans at that time. Today there are many other Elvis fans who were not even born by December 1968. They know Elvis’ first TV special only by viewing it years after the fact on VHS or DVD format. Many of we “vintage” Elvis fans, however, have vivid memories of the Christmas season of 1968, when a leather-clad Elvis made his first TV appearance in over eight years. 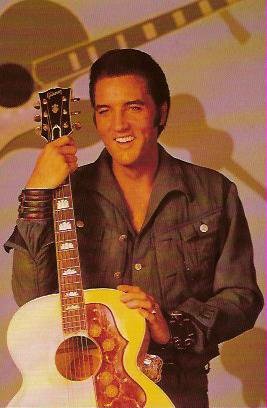 Let’s start with some basics. Officially titled Singer Presents Elvis, after it’s sponsor, the Singer Sewing Machine Company, Elvis’s special first aired on the NBC-TV network at 9 p.m. on Tuesday, December 3, 1968. The program had been heavily promoted with full-page ads appearing in many national publications, including The New York Times and Variety. Running 60 minutes, it was easily the highest rated prime time program in the Nielsen ratings for the week of December 2-8, 1968. (NBC’s Laugh-In and CBS’s Charlie Brown’s Xmas came in a distant second and third.)

The special ran again on NBC eight months later on Sunday night, August 17, 1969. For that showing, one change was made in the program’s content. Elvis’s rendition of “Blue Christmas” was replaced with “Tiger Man” in the summer re-run. I watched the initial December airing with some of my Chi Psi fraternity brothers at the University of Washington in Seattle. My grandmother and I watched the August re-run in her living room in Portland, Oregon.

Of course, as a 19-year-old Elvis fan in 1968, viewing that TV special was almost a spiritual experience. I had been an Elvis fan for five years by then and only had seen him in a series of continually disappointing movies. His powerful performance in the special not only validated my faith in his talent, but also gave him some credibility with my fraternity brothers, who previously had taken great glee in teasing me about my fondness for Elvis. 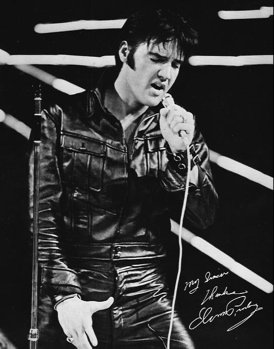 Forty years later the generally accepted consensus concerning Elvis’ ’68 TV special is summed up by Ernst Jorgensen in his book Elvis: A Life In Music. He wrote that the special, “only gave Elvis’ record sales a modest boost at first, but its real effect was much broader and deeper. It re-established his place as a dominant force in American music and culture.” Thus, the “Comeback” label, which is generally attached to the ’68 special these days.

Believe me, I’m as devoted an Elvis fan today as I was 40 years ago. Reluctantly, though, I have to admit that he was a “dominant force in American music and culture” only during the 1950s, and his ability to shape the same ended when he entered the army in 1958. While Elvis was away in Hollywood making movies, rock music had branched out into styles quite different from the basic form Elvis had popularized in the fifties. The purpose of his ’68 special was clearly not to reestablish him as the leader of a new movement in rock. In fact, the intent of that special was to take Elvis back to his old style of music.

• Elvis special was an example of “Indefinitely Prolonged Adolescence

On December 1, 1968, The New York Times printed an article entitled, “Elvis? Ah, The Good Old Days!” by Albert Goldman. (Yeah, the same Albert Goldman, who 13 years later would publish a hatchet-job biography of Elvis.) It is clear from the article that Goldman had seen a preview of Elvis’ special that would air on network television two days later.

As much as I recent Goldman’s intellectual drivel in his later book about Elvis, I believe he hit upon the essence of Elvis’ TV special in his 1968 article. He said the allure of the program was based upon a cultural force, which he termed IPA—“Indefinitely Prolonged Adolescence.” As Goldman explained it, when a person reaches the years between 18 and 20, they put away “childish” things (like Elvis), go to college, get a job, raise a family, and settle into the responsibilities of adulthood. 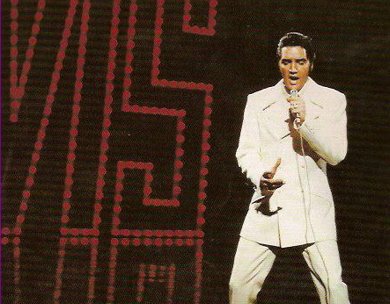 Then one day, says Goldman, “They’re rooting around in the basement and they uncover a stack of long-ignored records. Hey! Here’s ‘Rip It Up,’ ‘Hound Dog,’ ‘Heartbreak Hotel.’ Let’s bring them upstairs and slip them on the phonograph.” It’s that desire we all feel, periodically, to return to that simpler cultural time of our youth.

Goldman suggested that viewing Presley’s coming TV special would be like finding a stack of his records in the basement. “So the Elvis special becomes a very, well, special kind of program,” he explains, “a marker, a reminder, a coarsely pious Christmas card which demands some appropriate response. Might we suggest a solemn ‘Yeah!’ and a single exquisitely positioned finger-pop?”

• More a “Throwback” than a “Comeback” special

Rather than his “Comeback Special,” then, a better nickname for Elvis’ 1968 TV program might be his “Throwback Special.” Both the advertising for and the content of that special suggests that it was designed to portray Elvis as he used to be, and not as he would be. “This is the old Elvis,” an ad for the upcoming special proclaimed in 1968. “This is the ‘Hound Dog,’ ‘Jailhouse Rock,’ ‘Can’t Help Falling in Love’ Elvis that we all remember.” Most of the songs Elvis sang in the special dated back to the fifties, some even all the way back to his Sun Records days. The only number in the entire hour that could be considered forward-looking at the time was the closer, “If I Can Dream.”

In the final analysis, then, Elvis’ 1968 TV special should not be exalted for more than it was—a fantastic trip down memory lane. Elvis, himself, apparently was not impressed with the special. In August 1969, eight months after the special first aired, he introduced the song “Memories” to a Las Vegas audience by saying, “A song I just did on my recent TV show, which was pretty bad, but … can’t win’em all.”

What, then, is the true legacy of Elvis’ 1968 TV special? For Elvis it signaled a career change from actor to concert performer. And that gave all his fans the opportunity to do something we never thought possible—to see Elvis Presley perform live on stage. For that alone, at least in my book, his 1968 TV special was one of the most significant events in Elvis Presley’s momentous career. — Alan Hanson | © December 2009

Reader Comment: Your article on the '68 Special would mislead others since you imply, at the least, that Elvis did not think it was very good. The truth is that Elvis was quite pleased with it: (1) Both his performance and (2) the overall reaction to it from the public. As to his reaction, you can find it in a plethora of books on him and his comments as he watched it, I believe, not only first with Steve Binder (and liked what he saw), but then the televised event itself with Priscilla and her parents at the Presidio, I believe, on base there in San Francisco. The comment you mention is true, but it was simply Elvis, as he did quite often, engaging in self-deprecating humor. — Christopher (September 2013)

Reader Comment: Your blog on the Elvis TV Special started off well. Then, you seemed to buy into Albert Goldman's "stack of old records" analogy, then your blog lost it's way. The special also included, Guitar Man, Let Yourself Go, It Hurts Me, Big Boss Man, Memories, If I Can Dream, The gospel segment. You really dropped the ball here, being so easily persuaded by Albert Goldman. Yes, there are some "old cokes in shiny new cans" but that's what we also want to hear. Trying to Get to You and Tiger Man were awesome. It was a great TV Special! — Daniel (July 2017)

"The show only gave Elvis’ record sales a modest boost at first, but its real effect was much broader and deeper. It re-established his place as a dominant force in American music and culture."