Why Do Youngsters Worship Elvis?
A Morality Play by June Callwood

In 2006 , when I was doing research for my book, Elvis ’57: The Final Fifties Tours, I relied primarily on two types of source material—contemporary newspaper accounts of Elvis’ stage shows in 1957 and memories of those who witnessed those events, either as participants or spectators. I knew that many other revealing sources probably existed, but there was not enough time to seek them out. I was under pressure (of my own making) to get the book published in 2007, the 50th anniversary of Presley’s final tours in 1957. 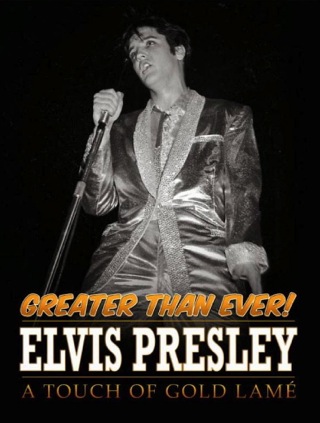 Since the book was published, a number of those hidden accounts have come to light, some of which would have helped make Elvis '57 a much more complete and entertaining story had I access to them a decade ago. Recently, though, I had the opportunity to read for the first time one of the best contemporary assessments of the Presley phenomenon in the 1950s.

June Callwood’s “Why Do Canadian Youngsters Worship Elvis Presley?” first appeared in the June 1957 issue of Chatelaine Magazine. Norwegian publisher Erik Lorentzen reprinted the article in his 2015 book, Greater Than Ever! Elvis Presley: A Touch of Gold Lamé.

June Callwood was not just another newspaper writer trying to figure out Elvis Presley when he came to Toronto in April 1957. A respected journalist, author, and social activist in Canada, her writings and activities revealed a deep concern for issues affecting children and women. Over the years, she participated in the founding of over 50 social action organizations in Canada. In 2005 a park in Toronto was named after her, and after she died two years later, the Premier of Ontario declared that annually her birthday, June 2, would be “June Callwood Day” in the province.

In a fascinating exposé of over 3,000 words, Callwood provided a clear analysis of Presley’s societal impact up to mid-1957. At age 33 when her article on Elvis appeared, Callwood was well positioned to understand the conflicting emotions that motivated both Presley’s young followers and their parents. It’s impressive, though, that she was also able to bring clarity to Elvis’ role in the cultural upheaval that his popularity brought with it.

Callwood identified young teenage girls, their parents, and Elvis as the main characters in the drama being played out in the mid-fifties. To her the outrage being voiced by the press, clergy, and community leaders was merely peripheral noise swirling around the trio of main characters acting on the cultural stage. The author cleverly shifted back and forth, bringing Elvis, his young female fans, and their parents to center stage.

• Carol Vanderleck as the young fan

Carol Vanderleck considered herself an average Elvis fan in 1957. June Callwood, though, called the 14-year-old a “Presley super-fan.” Carol became a bit of a celebrity in Toronto after collecting over 3,000 signatures on a petition asking Elvis to visit her city. When June Callwood met her, she found an “intelligent” and “demure” young girl living in a “well-tended but not pretentious” neighborhood in Toronto. “She was a member of the Brownies when she was small, and then the Girl Guides. She sang in the church choir and was a better-than-average student.” 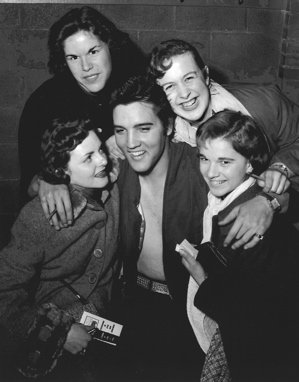 “Carol Vanderleck had been collecting pictures of movie stars for about a year when she first became a Presley fan,” Callwood explained. “She saw him in his first movie, Love Me Tender, and screamed exuberantly all though it. Afterwards, she diverted all her allowance money and everything she could earn from baby-sitting to the purchase of every Elvis Presley gimmick, such as a plastic wallet stamped with his picture.”

Asked why she liked Elvis, Carol responded, “We teen-agers like Elvis because he’s … well, different. His sideburns, everything about him is different from anyone else. It’s funny but the things parents don’t like about Elvis are exactly what we like most about him.” As vague as that reasoning was, June Callwood concluded that it was perfectly natural.

“As child psychologists and psychiatrists were steadily pointing out throughout the hubbub of derision and disapproval, Carol Vanderleck and her associates were exhibiting normal symptoms of adolescent growth. They were banded together within their own cult to give themselves a feeling of solidarity. This is a natural stage of development in the early teens, where the sense of strangeness and apprehension is acute. They had selected a symbol to admire, one who combines everything prohibited them—untidiness, garish dress, exhibitionism, defiance of rules, wealth, and freedom enough to buy purple Cadillacs at whim.”

• Mr. and Mrs. Vanderleck as the parents

Carol’s parents, didn’t see it that way, though. When word spread that Elvis was coming to Toronto, they were concerned about rioting, and, as June Callwood worded it, “the emotional lacerations of the Presley singing technique.” And one day Carol’s mother heard her daughter talking with some friends. “Elvis visits hospitals,” one said. “If he comes here,” said another, “let’s break our legs and then he’ll come and visit us.” Still, Mr. and Mrs. Vanderleck, noted Callwood, “were among the thousands of parents who, with varying degrees of reluctance, agreed to let their offspring see Elvis.”

When it was announced that Toronto was on Presley's spring tour schedule, Callwood explained, “Carol’s excitement flared so high that the family doctor ordered sedatives. As the day of Presley’s arrival neared, Mrs. Vanderleck remarked dolefully, ‘I am eying that bottle of sedatives and wondering if there is enough for both of us.’” When Carol learned that she was actually going to be allowed to meet Elvis at his press conference before his show on April 2, she was ecstatic. Her father said sternly, “I’m coming along.”

On April 2, 1957, June Callwood attended Elvis Presley’s press conference and stage show at Maple Leaf Gardens in Toronto. She kept one eye on Elvis and the other on Carol Vanderleck and her father to see how each reacted.

At the press conference, Callwood listened carefully to Elvis’ responses to the questions: 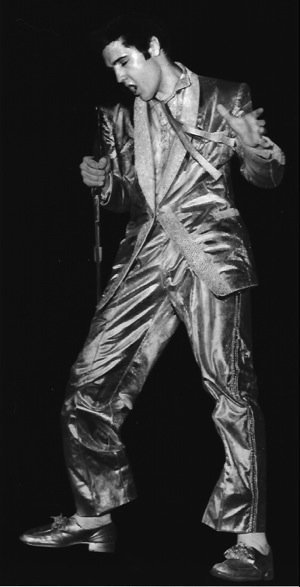 “He always is received with sincere admiration by newspaper reporters and photographers because of his unfailing candor. He looks unabashedly at his questioner and answers with unvarnished truth. When the question contains a word he doesn’t understand—a rather frequent occurrence—he never bluffs. ‘I don’t know that word,’ he confesses, without embarrassment.”

That fit with what she had read about him, that his “God-fearing parents … raised their only child to tell the truth, to be respectful to his elders, to refrain from drinking, smoking and stealing. He obeys all these injunctions firmly and with obvious pride in the tenacity of his character.”

However, June Callwood also detected immaturity in Elvis, a child-like quality that she matter-of-factly emphasized several times in her article. She sized him up as a “semi-literate Tennessee youngster with a man’s body and lusts, and the simplicity of a guileless ten-year-old.” Later, Callwood added, “While he is prone to childish pique and occasional high-flaring temper, Presley normally has the bouncy cheerfulness of a small boy at a perpetual party.”

During a second, brief press conference, Callwood was able to approach Elvis and ask a question: “Elvis, people who study teen-agers a good deal believe that you represent a way of growing up. Through admiring you, the kids can demonstrate to their parents that they are becoming adults and are ready to have opinions of their own. What do you think of this?” Looking confused, Elvis responded, “Honey, I don’t understand that at all.”

Elvis wanted June to explain it to him, but when he turned away for a minute to sign some autographs, Colonel Parker approach June. “Don’t tell him that again,” he told her. “If he starts to try and figure the thing out, he may lose what he’s got. He’s better off not knowing what it’s about, don’t you agree?” Callwood found it impossible not to agree.

Later she watched Elvis’ show in Maple Leaf Gardens. “He stood on the stage in his gold suit,” she observed, “drenched in spotlights and screams, weaving his heavy body in the manner that feels good to him and seems to get results.” Callwood found the commotion in the audience more interesting than Elvis’ act: “Eighty policemen prowled the aisles and stairs to watch for the spark of hysteria that can set off a panic. Gardens’ ushers assisted, firmly pushing into their seats all youngsters who leaped up. Because of the constant screaming, it was impossible to hear Presley sing at all."

• Back to Carol Vanderleck as the fan

June saw Carol Vanderleck in the crowd, sitting firmly and silently, hands clenched to her throat, while others wept and screamed around her. “Her father sat nearby,” Callwood noticed, “not too absorbed in guarding his daughter to be unamused at Presley.” The teenager and her parents survived the experience. Callwood explained:

“Carol Vanderleck went home with her father that night, exhausted and close to stupor. Her parents nevertheless were unconcerned for her future. In two days she was back to normal and swept up in school activities. ‘I’m glad she had the experience,’ observed her mother. ‘It was very trying for us but it’s something she’ll remember all her life.’”

In the end, June Callwood seemed more concerned about Elvis Presley’s future than Carol’s. “As entertainment history proves relentlessly, most teen-agers mature and discard their former heroes with thoughtless ease,” Callwood noted. “In a year or two the present Presley fans will have outgrown him, without noticing the transition.”

• Back to Elvis Presley as the rock ’n’ roll star

She wasn’t so sure that Elvis would be able to move on when Carol and her friends outgrew him. June labeled Presley, “the most unfortunate young person in the Gardens that night.” It seemed to her that Elvis was unprepared both intellectually and emotionally to continue down the road he was travelling.

Callwood appraised Presley stage act as “lewd” and “flagrantly rooted in eroticism.” It was equally obvious to her that Elvis didn’t realize that it was so:

“There is no question, of course, that Presley doesn’t know the meaning of his gestures. He is a worldly youngster. There is real reason to suspect, however, that he sincerely believes his behavior is well within the bounds of good taste … Encased, as he has been since his success began, in bodyguards and sharp-thinking managers, he is apparently unaware that many people consider him obscene.”

And Callwood doubted that Presley had the maturity to understand how his stage movements, “highly charged with sexual suggestion,” stimulated the young teenage girls in his audience:

“On the other side of the footlights at the Presley performance, the young teen-agers who enjoy a mass orgiastic reaction have little inkling of the implication of the movements that make them scream. They are at an age when their developing bodies have passed their own understanding, according to experts who have made a thorough study of adolescents. They must dance vigorously, take part in sports with shrill enthusiasm and scream whenever possible to work off superfluous excitement. Presley, with ungainly competence, fills their need.”

June Callwood agreed with many experts that the young girls Elvis was stimulating in 1957 would outgrow their need for him, but what would the future hold for Elvis? She closed her article with a dark prophecy.

“The question that occupies far less attention seems to some observers the greater one: How can Elvis Presley mature without destroying himself? His prospects look heavily seeded with tragedy.”— Alan Hanson (© June 2016)

"There is real reason to suspect that he sincerely believes his behavior is well within the bounds of good taste …  he is apparently unaware that many people consider him obscene."