"On Friday night, June 9, an air of shabby carnival hung over Seventh Avenue. The sidewalks around Madison Square Garden teemed with kids and toothless old men hawking Elvis pennants, Elvis posters, albums of Elvis pictures. There were cops on horses and cops on foot, and vendors with brown paper bags containing Elvis T-shirts circulated among the ticket-holders. But few ticket-holders stopped to buy. They kept moving toward the arena, their excitement so palpable it seemed to cut through the muggy twilight."

That’s how New York Times writer Chris Chase gently set the scene in the opening of her 1972 article about Elvis Presley’s first concert appearance in America’s largest city. Although Chase’s was just one of hundreds of Presley concert reviews that appeared in local newspapers in the 1970s, it was, in this writer’s estimation, far and away the best of them all. While most reporters of that era in Presley’s career limited their appraisal of his stage show to descriptions of jumpsuits, song titles, and souvenir scarves, Chase’s piece in the Times’ June 18, 1972, edition is reminiscent of the colorful and imaginative Presley reviews produced by journalists in the fifties. 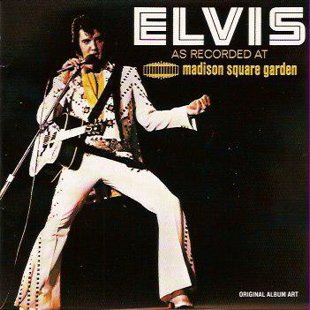 Among the 230 tour stops Elvis made in the seventies, only his 1973 satellite broadcast show in Honolulu can compare in significance with his Madison Square Garden performances. At the time of Elvis’ appearance there, the Garden was considered the country’s most prominent performance venue due to its huge revenue generating power and its location in the most prestigious entertainment market in the U.S. Elvis began his run at the Garden on June 9, 1972, with a press conference at 4 p.m. followed a concert that evening at 8:30. The following day there were two more shows at 2:30 and an 8:30. Presley closed out his three-day run in the city with an 8:30 show on June 11.

Both June 10 shows were recorded and later released by RCA. The evening show appeared in 1972 on the LP “Elvis: As Recorded at Madison Square Garden,” but the 2:30 show was not released until 20 years after Elvis’ death under the title, “Elvis: An Afternoon in the Garden.” Chris Chase attended Elvis’ afternoon press conference and evening show on June 9 prior to writing her article.

The press conference in the hotel ballroom was “jammed with freaks, little skinny girls, fat men in hippie clothes, lots of leather jackets and inane questions,” Chase noted. Also conspicuous in the background was the “big-bellied, straw-hatted, cigar-carrying” Colonel Parker. She listed a few of Elvis’ good-natured, tongue-in-cheek responses to questions, and then moved on to the pre-concert atmosphere that evening.

"Inside the Garden, excitement turned to awe. Around a raw wood stage were ringed thousands and thousands of seats and, by the time Elvis came on, every one of them would be filled. Not to see a hockey game, or a world’s championship prizefight, but to view—in person—one man. One man can fill this place, you told yourself in disbelief. All by himself, he’s a team, he’s a convention."

Fifteen minutes before the 8:30 show time, an MC came on stage to encourage the already seated crowd to buy their Elvis posters and pictures before later arrivals stripped the concession stalls of everything. “It wasn’t a class approach,” Chase noted, “and the hype continued throughout the evening.”

As she waited for the show to start, Chase took in the ambiance around her:

"A girl sitting next to me in the Garden that Friday night said she was 30, and she’d loved Elvis since she was 13. She was wearing jeans and a T-shirt, and talking to a female reporter who declared that if she’d ever had an affair with Elvis, “I’d write about it and write about it and write about it.” Way down on the floor below, a large-breasted girl in a see-through pink halter traversed the aisles slowly and proudly, stopping conversations in mid-sentence."

At 8:30 the lights went down and the Sweet Inspirations came on stage to warm up the crowd. Chase felt her senses assaulted. “The music was so loud, the words a blur, and from all over the vast cavern of the Garden came flashes of blinding light mixed with the smaller, softer beams of the ushers’ torches, and the glow of cigarettes.”

The crowd tolerated the Inspirations, but not so the comic who came on next. “Let him be nameless,” Chase declared with sympathy, “poor soul, poor shnook, poor Christian thrown to the lions waiting to be tamed, to be trained, to be mastered, who were waiting, in fact, for anything but this little man who let them see his pain.”

"It was [my husband’s] opinion that the crowd had been lost, that between irritating announcements about the “limited supply” of mementoes which could be had for two bucks apiece, and the ritual murder of the comic, some spirit of anticipation had been broken, a sweet eagerness had turned rancid. He was wrong." 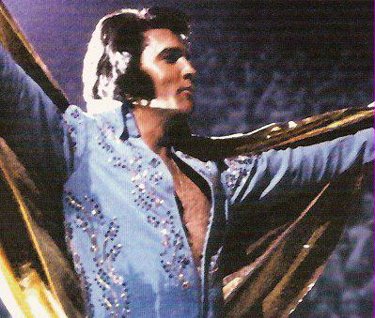 Elvis appeared suddenly at 9:15, in a white suit with shirt slashed low to reveal his chest. A cape lined in gold cloth and collar faced with scarlet hung from his shoulders. “He looked like a prince from another planet,” Chase observed, “narrow-eyed, with high Indian cheek bones and a smooth brown skin untouched by his 37 years.”

"When he started to work with the mike, his right hand flailing air, his left leg moving as though it had a life of its own, time stopped, and everyone in the place was 17 again. It was a lesson in dominance; we had just seen the comic who couldn’t control anybody, not even himself, and that had got us nervous; now Elvis made it all right again.

He used the stage, he worked to the people. The ones in front, in the best seats, the ones in back, and up in the peanut galleries. He turned, he moved, and when a girl threw a handkerchief on the stage, he wiped his forehead with it and threw it back, a gift of sweat from an earthy god."

The music was mixed, Chase explained. He did “Bridge Over Troubled Water” and “For the Good Times.” It wasn’t until Elvis got to some of his old numbers, however, that the crowd came “unglued.”

"Young girls moaned, and stood in their seats trying to dance, and one kid took a giant leap from a loge seat clear to the stage, only to be caught and taken away before she could come too close to her heart’s desire. You had to hope she hadn’t broken her leg in that vain but glorious effort."

Chase had a flashback. In Elvis’ heyday, the world was more innocent, she recalled. On TV his grinding hips drove little girls wild and their mothers lamented their daughters’ obsession. Looking around, Chase realized that two decades later many of those daughters had brought their teenagers “to hear the man whose appeal bridges a generation gap.”

"When Joe Dimaggio hit a baseball, his grace made the act look easy and inevitable; whether it turned into a pop fly or a home run, it was beautiful, because he did what he did so well.

Friday night, at Madison Square Garden, Elvis was like that. He stood there at the end, his arms stretched out, the great gold cloak giving him wings, a champion, the only one in his class."

In addition to its superb sensory descriptions, Chris Chase’s 1972 New York Times essay stands out because it explains why New York City has embraced Elvis Presley as its own. He was born and raised elsewhere, far from the bustling streets of Gotham, but in one three-day run at the city’s entertainment palace, he earned a seat forever in New York’s pantheon of heroes. — Alan Hanson | © October 2011

"He stood there at the end, his arms stretched out, the great gold cloak giving him wings, a champion, the only one in his class."