From Munich to Paris
Elvis' "Fun"-Filled Army Furlough in 1959

The morning of Saturday, June 13, 1959, Elvis Presley and three friends boarded a train in Frankfort, Germany. It was the start of a 14-day army furlough that none of them would ever forget. Joining him for the “fun”-filled, two-week escape from army routine were friend Lamar Fike and army buddies Rex Mansfield and Charlie Hodge. 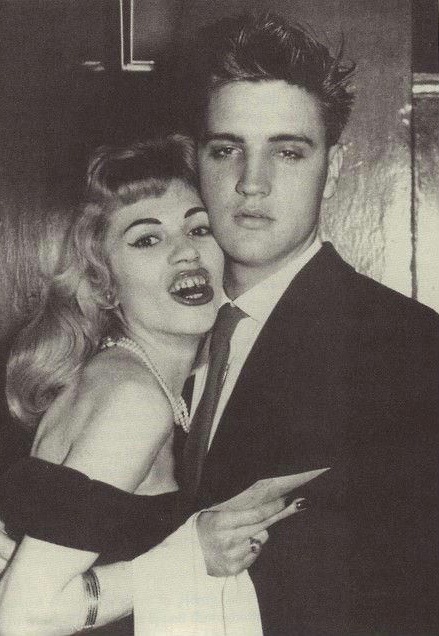 Of course, the racy details of those two weeks in Elvis’ life were shielded from the press at the time to protect his respectable reputation as America’s greatest young entertainer. Since his death in 1977, however, both Rex Mansfield and Lamar Fike have shared their memories, bringing to light many of the details of those rowdy two weeks they shared with Elvis in 1959. Mansfield’s account appeared in his book, “Elvis the Soldier” (since reprinted under the title “Sergeant Presley”) in 1983. Fike revealed some details of the trip in the 1995 volume, “Revelations from the Memphis Mafia.”

Mansfield, who had been inducted into the army with Elvis in Memphis on March 24, 1958, and sent to Germany with him, recalled the day Elvis asked if he would take some leave and accompany him to Munich and Paris. “Of course, I jumped at this chance,” Rex declared, “and put in for my 14-day leave immediately. Elvis had chosen the dates and had invited Lamar and Charlie to go along. There would only be the four of us, and we were going on this trip for the sole purpose of having nothing but ‘fun.’”

The first leg was a four-hour train ride south from Frankfurt to Munich, where Elvis already knew the kind of “fun” to be found there. He and Lamar had spent a couple of nights in Munich on a three-day pass the previous March. Elvis went at that time to visit Vera Tschechowa, an 18-year-old German actress he had met that January while shooting publicity photos for the March of Dimes. Among the sites Vera showed Elvis was the Moulin Rouge, a well-known striptease club in Munich. What Elvis saw there that first night brought him back the next two nights, accompanied only by Lamar. “He’s with all these German dancers, and maybe some B-girls, call girls,” Fike remembered in 1995. “Listen, German girls are not innocent. German girls are extremely aggressive.” But on the train to Munich is June, Rex had no idea about the kind of “fun” Elvis had in mind for the four of them.

In Munich they checked into the Edelweiss Hotel and prepared for a pleasurable evening at the Moulin Rouge. Elvis immediately got reacquainted with the chorus girls he’d met in March. According to Peter Guralnick in his Presley biography, Elvis had his picture taken there with “Marianne, a stripper who had developed a routine, as the wire services gleefully reported, wearing ‘nothing but a standard-size Presley record.’” After the night’s final show, some of the chorus girls were invited to the guys’ quarters at the Edelweiss Hotel.

“We spent two full days and nights in Munich,” Rex recalled. “The whole time was spent in the Moulin Rouge or the hotel. I don’t have to spell out what was going on in the hotel … girls, girls, and more girls.” 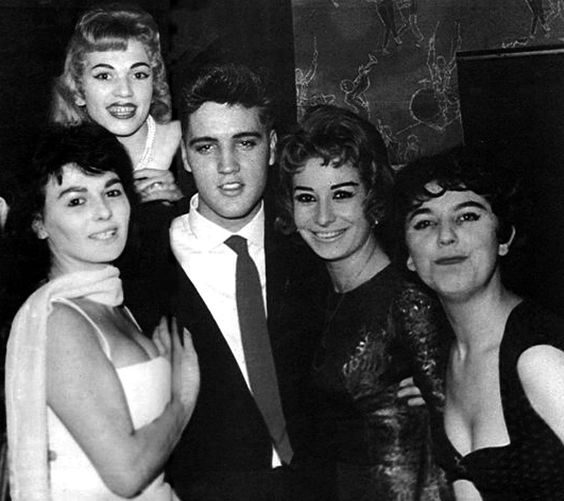 It took some stealthy maneuvering to get the girls in the hotel, according to Lamar. “They’d lock the doors at nine o’clock at night. So we raised the window, and we’d bring the women in that way. And we got caught. Man, the proprietors raised holy hell with us and kicked us out.”

Elvis had been raised in church with a solid set of moral values, but they began to weaken when he became a rock ’n’ roll star in 1956. According to Lamar, “After his mother died (in 1958), he just let loose sexually … Elvis had no compunction about that kind of stuff. He had absolutely no guilt and no trouble balancing his behavior with his religious beliefs.”

Rex’s most vivid memory of those nights in Munich was of a fight he got into with a German man who objected to Rex sitting with a certain girl at the Moulin Rouge. When she wouldn’t leave with the German, the two men started trading punches. Elvis jumped in to break up the fight, it seemed, but instead held the German’s arms behind him while saying, “kill him Rex, kill the bastard.” Rex followed instructions. “I was able to take my time as I drew my fist back sort of like a baseball pitcher’s wind up. When my fist landed on his jaw he went out like a light. Elvis then turned him loose and the guy sort of slid slowly down the wall.” The bouncers carried the man out, the manger apologized to Elvis’s party, and the guys continued their evening of entertainment at the club.

• A press conference and a sidewalk stroll in Paris

After three nights in Munich, Elvis and his three companions made their way to Paris in a private train car. Awaiting them there were Jean Aberbach and Freddy Bienstock, Hill and Range music executives living in Europe. Colonel Parker had asked the two to assist Elvis during his time in Paris. Reservations had been made for Presley’s group to stay in a top floor suite overlooking the Champs-Élysées at the pricy Prince de Galles (Prince of Wales) Hotel. Rex Mansfield recalls the suite having a parlor connecting two large bedrooms. Elvis took one of the bedrooms, with Rex and Charlie sharing the other. Larmar bedded down in the parlor. To assist Elvis when needed, Jean Aberbach was in a room a few floors below.

Before the “fun” in Paris could begin, one piece of business was on the schedule—a press conference in the hotel’s lounge. Rex was amazed at how Elvis seemed to change when the lights came on.

“The television and movie cameras were running like mad and the flashes from still cameras were blinding. Elvis was seated behind this large table on which were about 25 microphones. The press conference lasted for more than an hour while about a thousand questions were asked. Elvis did a beautiful job handling the press and was as calm as the most experienced professional. Elvis was so much like one of us, when he was off stage, but in the spotlight he seemed to turn into another person. Elvis was right at home behind the mass of microphones and seemed to really be enjoying the press and the press were really enjoying him.”

Rex, Lamar, and Charlie were looking forward to seeing the sites in Paris. While some of the reporters told Elvis that celebrities could walk the city’s streets unbothered, Elvis decided they should try a short walk near the hotel before having Jean take them on a full tour of the city’s tourist spots. Rex described how that test put an end to any further public outings in Paris.

“There was this real nice sidewalk café on the Champs Élysées and we decided to sit down for some refreshments and people-watching. Before we even had a chance to order our drinks, the problem began as people of all shapes, sizes, colors and ages pounced upon us from every direction. There appeared to be about 200 people crowded around us trying to get to Elvis. They all wanted autographs, to make pictures, to touch or talk with Elvis all at the same time. It took us at least an hour to make our way back to the hotel even with Lamar, Charlie and I pushing and shoving people out of the way.”

• On a 10-day carousel ride with the Blue Belles

Elvis realized that he would only be able to come and go after dark in Paris, which fit his desire to experience the city’s famous nightclubs, including the Folies Bérgere, the Moulin Rouge, the Carrousel, the Café de Paris, and The Lido. It started out with Jean Aberbach making reservations and taking Elvis and his friends from club to club. Once the guys became familiar with the club scene, though, they began going out on their own. 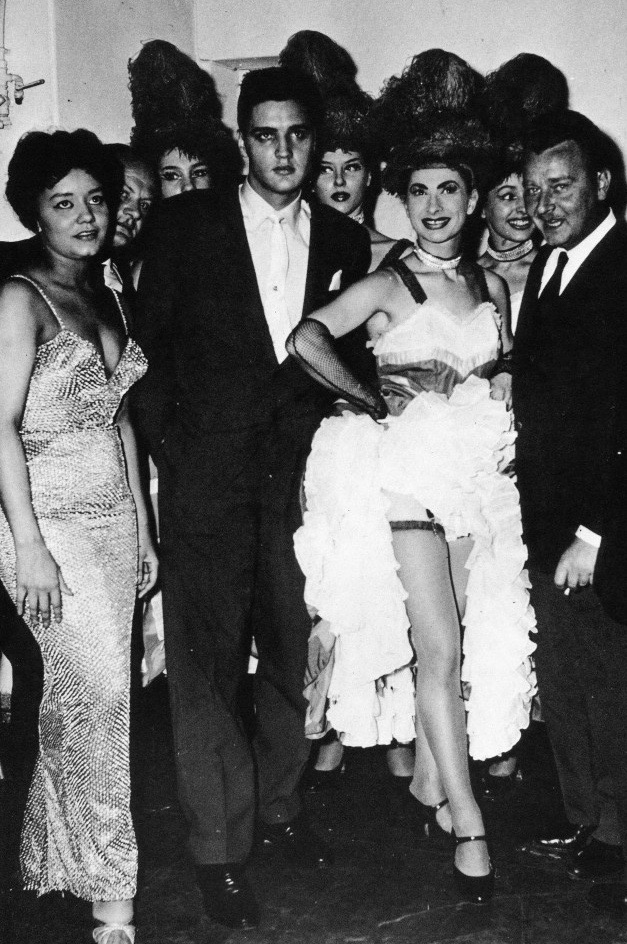 Elvis settled on The Lido as his favorite club because people didn’t bother him there, and he liked the club’s showgirls. The Blue Belles were a string of English chorus girls working in Paris at the time. Also, Elvis liked being allowed to go backstage every night at The Lido. So it became a regular stop in the schedule they followed over their 10 days in Paris, as Rex explained.

“We would catch the early show at one of the well known Paris night clubs, and almost every night we would catch the last late show at the Lido. Every night, after the shows closed, the show business people from all over Paris would gather at this place called The Le Bantu. We would usually arrive there around 4:30 a.m. with our string of girls from the Lido. Usually, Elvis would pick out two of the best looking and we could have the rest. Somewhere around 8 or 9 a.m. we would leave and take with us several of the Blue Belle girls to our hotel.”

When the “fun” was over around noon, Elvis and the guys would sleep until around 8 p.m., at which time they would arise, consume a champagne breakfast, take baths, get dressed, and head out to follow the same routine over again.

Both Lamar and Rex remembered one particular episode after the partying stopped one morning in the hotel suite. “There must have been 20 or more,” Rex recalled of the Lido girls who were sleeping in the suite. “It was hard to walk around because they were laying around everywhere. I mean it was wall to wall girls and we had slept late that day to around 9:30 p.m.” The Lido club manager called to say he needed his girls back so that he could start that night’s show. Lamar had to hire several limousines to transport the Blue Belle girls back to the club in time for their first show that night.

Lamar recalled a scary incident that occurred after he told Elvis about one particular girl he desired at Le Bantu. Elvis went backstage and convinced her to come out and meet Lamar. “Next thing you know, I had her out in the car about five o’clock in the morning,” Lamar explained. “I made a move on her and let out a bloodcurdling scream. My ‘she’ was a ‘he.’” Lamar said even Elvis admitted, “Man, if someone hadn’t told me, I never would have known.” After that, if a girl sat down by Elvis, he might look at Lamar and say, “What do you think?” At times the appearance and gestures of the drag queens were so perfectly feminine, that they couldn’t be sure.

All “fun” things must end, though, and the furloughs of Elvis, Rex, and Charlie expired at midnight on Friday, June 26. According to Rex, though, Elvis decided they would miss the train back to Frankfurt that day and spend another night in Paris. At that time the army had a day-of-grace policy concerning leaves, so they knew as long as they were back at Friedberg by midnight on the 27th, they would not be AWOL. It cost Elvis $800 to hire a limousine to take them back to Germany. Elvis later told Rex he had spent $10,000 on the trip to Paris, and that it was worth every cent of it.

“I will never forget that trip as long as I live,” Rex declared in his book. “Sometimes it all seems like some kind of a dream.” Elvis might have felt the same, although Rex’s memory surely was the more intense. After all, unlike for Elvis, the kind of “fun” they had in Munich and Paris was a once-in-a-lifetime experience for Rex. — Alan Hanson | © January 2017

"Elvis realized that he would only be able to come and go after dark in Paris, which fit his desire to experience the city’s famous nightclubs, including the Folies Bérgere, the Moulin Rouge, and The Lido."