In ’57 a Pistol-Packing Presley
Threatened a Marine in Memphis

“I’ll blow your damn brains out, you punk.” That’s what Elvis Presley told a young marine on March 23, 1957. At least that’s what 18-year-old PFC Hershel Nixon alleged Elvis said as the rock ’n’ roller pointed what looked like a 25-caliber pistol at the marine. Presley denied he made the comment, and the gun turned out to a “toy.” Although no charges were filed, and both men later apologized to each other, the incident made national news.

It was the third time in six months that the 22-year-old Presley had made the news for such confrontations. On October 18, 1956, Elvis was arrested for assault and disorderly conduct after a fistfight with two gas station attendants in Memphis. A judge threw out the charges the next day. Then, that November he was involved in a brief barroom fracas when a jealous husband challenged him to a fight. Blows were thrown but neither man was injured. Again, Elvis was exonerated

The episode with the marine only increased the public perception that Presley was as reckless on the streets as he was on stage. It was an image that fueled his young fans’ adulation and added to the conviction of community leaders that Elvis had a harmful influence on teenagers. 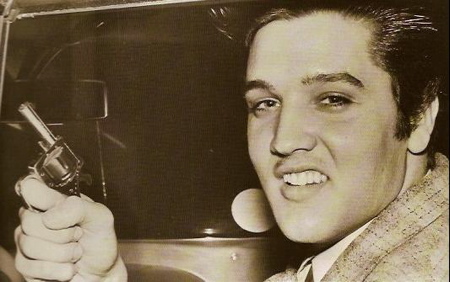 The Friday night episode started with Elvis signing autographs for a group of girls while he sat in a cream-colored convertible parked on a mid-town Memphis street. Both Presley and Nixon agreed that the incident began when the marine walked up to the car and told Elvis something to the effect, “You bumped into my wife as she walked out of a restaurant about two months ago. She told me all about it. I want to get it straightened out right now.” Private Nixon later claimed that he only wanted to start a conversation with Elvis and that he had made up the story about his wife “so I’d have something to talk about.”

Presley, who said he thought Nixon was trying to start a fight, moved away but said the marine followed. “I told him I didn’t know what he was talking about because I had been in Hollywood. Then I thought about that toy gun and I pulled it out. I said, ‘You don’t want to start trouble with me, do you?’”

Thinking the pistol was real, Nixon backed off, but he later threatened to have Elvis arrested and contacted the police. However, he later told a reporter, “I won’t file a complaint because he didn’t hurt me in any way, but I think Presley owes me an apology because nobody—not even Presley—has a right to pull a pistol on someone, even if it is just a toy. I didn’t try to pick a fight and I wasn’t drinking. I had no way of knowing the pistol was a toy.”

Presley contended that Nixon should have known he was only kidding when he pulled out the gun. “I was smiling when I took it out of my coat,” said Elvis. “Everybody else standing there knew it wasn’t real.”

On the Monday following the Friday night incident, Elvis sent Private Nixon a six-page telegram explaining his actions and offering an apology. As Presley biographer Peter Guralnick noted, however, the telegram also revealed much about the young singer’s attitude about the burden of fame. The telegram “seems to go far beyond anything to do with the specific incident,” noted Guralnick, “and offers up a kind of discursive guide to the social, personal, and political philosophy that will govern Elvis all his life.”

The telegram started out with Elvis offering Nixon an apology—and asking for one in return. “I read in the paper that you wanted an apology and I am willing to give you an apology. In fact I think we owe each other one. The whole thing is kind of uncalled for. I’m sorry that it happened … ”

• Elvis revealed his anxiety in telegram

Elvis went on to explain the anxiety he felt when strangers approached. “The majority of people all over the world are very nice but there are a few who want to prove something,” he noted. “I have talked my way out of trouble so many times that I couldn’t even count them not because I was afraid but just because I was always the type of person that I never did believe in fighting and all that kind of stuff unless I thought it was absolutely necessary … Many times there have been people who came up to me and stick out their hands to shake hands with me and they hit me or I have had guys to come up and ask for autographs and hit me and then take off for no reason at all. I had never laid eyes on them before. I said many, actually there were very few, but I have had it happen to me.”

Elvis then explained his reaction when Nixon approached him three nights before. “When you and your friends called me off the other night and you started that stuff about me bumping into your wife I didn’t know what you were going to do,” he noted. “I’m just like you. If a guy can do something to protect himself he should do it. Again I say I am sorry the whole thing came up.” Elvis closed by wishing the marine “the best of luck in the future.”

Elvis no doubt thought that his telegram would end the matter, but Private Nixon’s marine superiors at Millington Naval Air Station in St. Louis, where Nixon was undergoing training, wanted a more formal conclusion. They requested a private meeting between Presley and Nixon to resolve the situation. So, on Tuesday, March 26, 1957, the two men met with City Judge Beverly Boushe in his chambers at the Memphis Police Station. While the meeting took place, reporters waited in an adjoining room.

• “It was all a misunderstanding,” said Elvis

When Elvis, wearing a striped sports coat, and Nixon in his marine dress uniform, emerged from the judge’s chambers, they posed shaking hands for a photo that appeared in the Press-Scimitar that afternoon. “It was all a misunderstanding,” Presley announced. “We’re both sorry it happened. I told him that I felt I owed him an apology, and that I also felt he owed me one. He thought I had a real gun and I thought he and his buddies were trying to beat me up. That’s all there was to it.”

When a reporter asked Elvis why he had the prop gun on him, Presley explained that he was playing a joke on friends that afternoon. He would ask a friend, “Have you had your shots yet?” Then he’d pull the gun and say, “I’ll take care of that.”

As Elvis and Nixon were shaking hands, Judge Bousche joked, “Well, Elvis, you might be a marine yourself before long.” Private Nixon added, “You’d make a good marine, Elvis. The corps would be proud to have you.” Elvis responded that he would be proud to be a marine, and then addressed the rumor that he didn’t like servicemen. “I want people to know that I’ve never said anything like that,” he asserted. “The Marines, the Army and the Air Force protect our country, and I have a lot of admiration for them.”

A reporter asked Nixon if Elvis had really threatened to blow his brains out. “That’s all over now,” Nixon responded. “I know that Elvis isn’t afraid of me, and I’m not afraid of Elvis. We’re friends now.”

Elvis, who was about to leave Memphis for a 10-day stage tour, invited Nixon to see his show that Friday in St. Louis, where the Marine was stationed. “I’ll sure be there,” Nixon said. “I’ll bring my wife.”

Thus another troublesome incident in the controversial life of the rock ’n’ roll singer was resolved. For Elvis, though, there were repercussions. Burned again by a disruptive street encounter, he began to recede even further behind a protective wall of retainers and bodyguards, all held to a strict code of loyalty designed to protect his image and keep strangers away. Unfortunately, that wall would also eventually isolate Elvis in a make-believe world of his own making. — Alan Hanson | © July 2010

"The episode with the marine only increased the public perception that Presley was as reckless on the streets as he was on stage."