Did Sinatra Really Bad Mouth
Elvis and His Music in ’57?

“His kind of music is deplorable, a rancid smelling aphrodisiac. It fosters almost totally negative and destructive reactions in young people.” — Frank Sinatra, 1956

Some time ago, on another Elvis web site, I came across this alleged Frank Sinatra quote about Elvis, allegedly from 1956. The italicized words are required because no source reference was provided for the statement. Where did Sinatra say it? And when, exactly, did he say it? In what publication did it first appear? 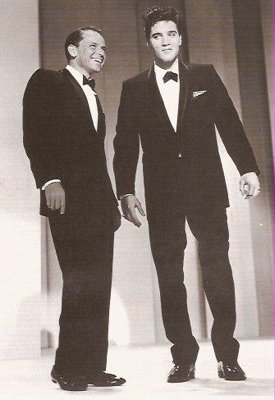 When I inquired, the web site owner referred me to another site where he found the quote. On going to that other site, I found the quote, but—surprise—no attribution there either. It’s a perfect example of the bad side of the internet. Certainly, the web has been a boon to Elvis Presley fans. We can find out so much more information about the man and his music than was ever available to us before. However, we have to be careful because a lot of distorted and downright phony information about Elvis is circulating out there on the web. That’s why I always try to provide the sources for the information I pass along on Elvis-History-Blog.com.

I happen to know that the alleged quotation attributed to Frank Sinatra above is a distortion, because I came across it while doing research for my book, Elvis ’57: The Final Fifties Tours. So let’s see if we can’t set the record straight about what Frank Sinatra really said about Elvis in the 1950s.

While in Paris, France, in the fall of 1957, Sinatra wrote a short article about American music that was printed in the French magazine Western World. An Associated Press article that focused on Sinatra’s comments about rock ’n’ roll in the French magazine appeared in many U.S. newspapers in late October 1957. The following two paragraphs were quoted directly from Sinatra’s article in the October 28, 1957, edition of the Los Angeles Mirror News.

“My only deep sorrow is the unrelenting insistence of recording and motion picture companies upon purveying the most brutal, ugly, degenerate, vicious form of expression it has been my displeasure to hear—Naturally I refer to the bulk of rock ’n’ roll.

“It fosters almost totally negative and destructive reactions in young people. It smells phony and false. It is sung, played and written for the most part by cretinous goons and by means of its almost imbecilic reiterations and sly, lewd—in plain fact, dirty—lyrics, and as I said before, it manages to be the martial music of every sideburned delinquent on the face of the earth … this rancid-smelling aphorodisiac I deplore. But, in spite of it, the contribution of American music to the world could be said to have one of the healthiest effects of all our contributions.”

• Why were Sinatra’s words twisted against Elvis?

It's obvious that whoever first floated the opening alleged Sinatra statement about Elvis took two passages from Sinatra’s complete statement above (in which he referred to rock ’n’ roll in general), and added “His kind of music … ” at the beginning to make it appear Sinatra was speaking about Elvis. In fact, Frank had not named any specific rock ’n’ roll singer in his article.

What’s to be gained by distorting Sinatra’s statement to make it appear as if he wanted to criticize Elvis Presley? It’s a psychological ploy that some Elvis pseudo-journalists like to utilize and one to which many Elvis fans fall prey. Build up Elvis by knocking down his competitors. Want to promote Elvis as a rebel in the entertainment world? Then demean the power players around him, like Sinatra, even if you have to make up stuff to do it. Really, Elvis’s accomplishments were impressive enough without having to embellish them with phony, distorted claims.

Let’s complete the Sinatra-Presley story from 1957. When Elvis held a press conference in Los Angeles on October 28, 1957, prior to his appearance that night at the Pan-Pacific Auditorium, he was asked his reaction to Sinatra’s comments about rock ’n’ roll. From the press reports in several LA newspapers the next day, it’s impossible to know exactly what Elvis said in response, since various reporters translated their notes differently. Still, all reports were consistent about the tone of his response. In his Herald-Express article of the 29th, Gerry McCarthy quoted Elvis as follows:

“He has a right to his opinion, but I can’t see him knocking it for no good reason. I admire him as a performer and an actor but I think he’s badly mistaken about this. If I remember correctly, he was also part of a trend. I don’t see how he can call the youth of today immoral and delinquent. It’s the greatest music ever and it will continue to be so. I like it, and I’m sure many other persons feel the same way.”

• Elvis fans rose up against Sinatra

McCarthy also asked one of Elvis’ female fans what she thought of Sinatra’s comments. “He’s had his day, and his day is past,” she said. “Long live Elvis.” The ire of other Elvis fans came down on Sinatra in the Herald-Express letters-to-the-editor column. The excerpts that follow come from a letter printed on November 5, 1957.

Sinatra had his defenders too. One letter, written in response to Estella and Sarah, was printed in the paper’s November 15, 1957, edition. It read in part:

“So they called Sinatra a crabapple. Well they can call me a crabapple too, if they wish, because I sincerely hope they will be on hand to see Elvis Presley run out of town by citizens who prefer to be entertained. Frank Sinatra can probably wiggle around just as much as Presley, but he knows how to express his feelings for a song without going into vulgar and derogatory motions.” — R.S.

So, what did Frank Sinatra really think about Elvis Presley in 1957? In a short article in Variety on June 5, 1957, Sinatra, then on the set of Pal Joey in Hollywood, was asked to comment of Presley’s singing ability. He responded:

“Only time will tell. They said I was a freak when I first hit, but I’m still around. Presley has no training at all. When he goes into something serious, a bigger kind of singing, we’ll find out if he is a singer. He has a natural, animalistic talent.” — Alan Hanson | © August 2009

"Presley has no training at all. When he goes into something serious, a bigger kind of singing, we’ll find out if he is a singer."